Top 10 Most Terrifying Moments in Film

Top 10 Most Terrifying Moments in Film

*Warning: The following moments will contain graphic violence and references to sexual content. Readers under the age of 15 or of a nervous disposition please exit the page now* and go read something more appropriate, like Céire’s latest Otaku Digest!

10. The Twilight Zone Movie “Do you want to see something scary?”

There’s many scary moments that can be chalked up to the Twilight Zone, but in the realm of film one moment in particular stands out as an A+ jump scare. During the opening scene, two friends are driving on a dimly lit road, discussing their favourite episodes of the Twilight Zone.

The scene is well-cut, mingling observations on the show with friendly banter. The tone of the scene suddenly shifts when one friend asks if the other wants to see something scary.

I won’t spoil it, but it’s a jump scare which is sudden and unexpected.

9. Phantom of the Opera Unmasking 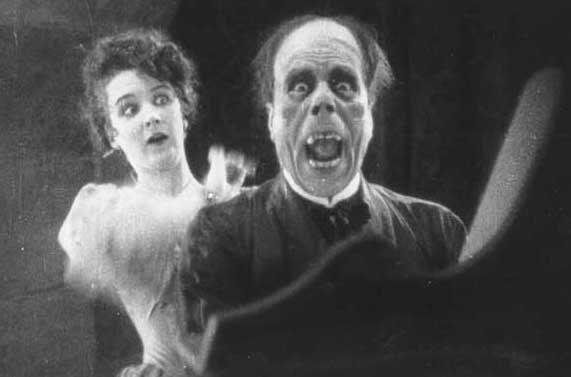 In a scene that may perhaps seem maddeningly camp by today’s CGI standards, this scene made horror in 1925. Erik, the Phantom of the Opera has seen the ascension of our heroine Christine in the world of opera. Proclaiming himself an angel of music, Erik says Christine may come and go in his lair as she pleases under one condition. She must never look under his mask. Mark Gatiss is perhaps correct in summarizing this scene as the quintessential horror experience: we know we shouldn’t look, but we are compelled to pull the mask off.

This scene was all made possible through the efforts of Lon Chaney, who did his own make-up and prosthetics to create the gruesome visage of the phantom, heavily rumoured to cause viewers to scream and faint in cinemas. If the pull-back-and-reveal wasn’t frightening enough, Erik’s reaction, furiously pointing at Christine as he approaches, is nothing short of chilling.

Okay, I’ll admit The Blair Witch Project seems rather hackneyed now, considering the relative explosion of found footage films since the original. However, it cannot be denied that this ending scene makes the most of the genre.

Both separated as they enter a broken down house in the woods, our protagonists have already been pushed to the edge of sanity. One of their companions has already gone missing, scraps of hair and teeth found in his absence, they now know that something is hunting them. Already wise to the stories of Rustin Parr, a deranged hermit who killed children in pairs, forcing one to stand in the corner while he butchered the other, Heather and Mike find themselves in the creepiest location possible. Covered with runic carvings are the hand prints of children, the found footage style makes the most of Heather’s panic as she hyperventilates and trembles uncontrollably. Mike vanishes downstairs to the cellar, claiming he can hear their missing friend, Josh.

When Heather finally enters the cellar she finds Mike: facing the wall. In this moment, the settings and the genre combine to create a powerful rush of fear, claustrophobia and isolation that is difficult to beat. 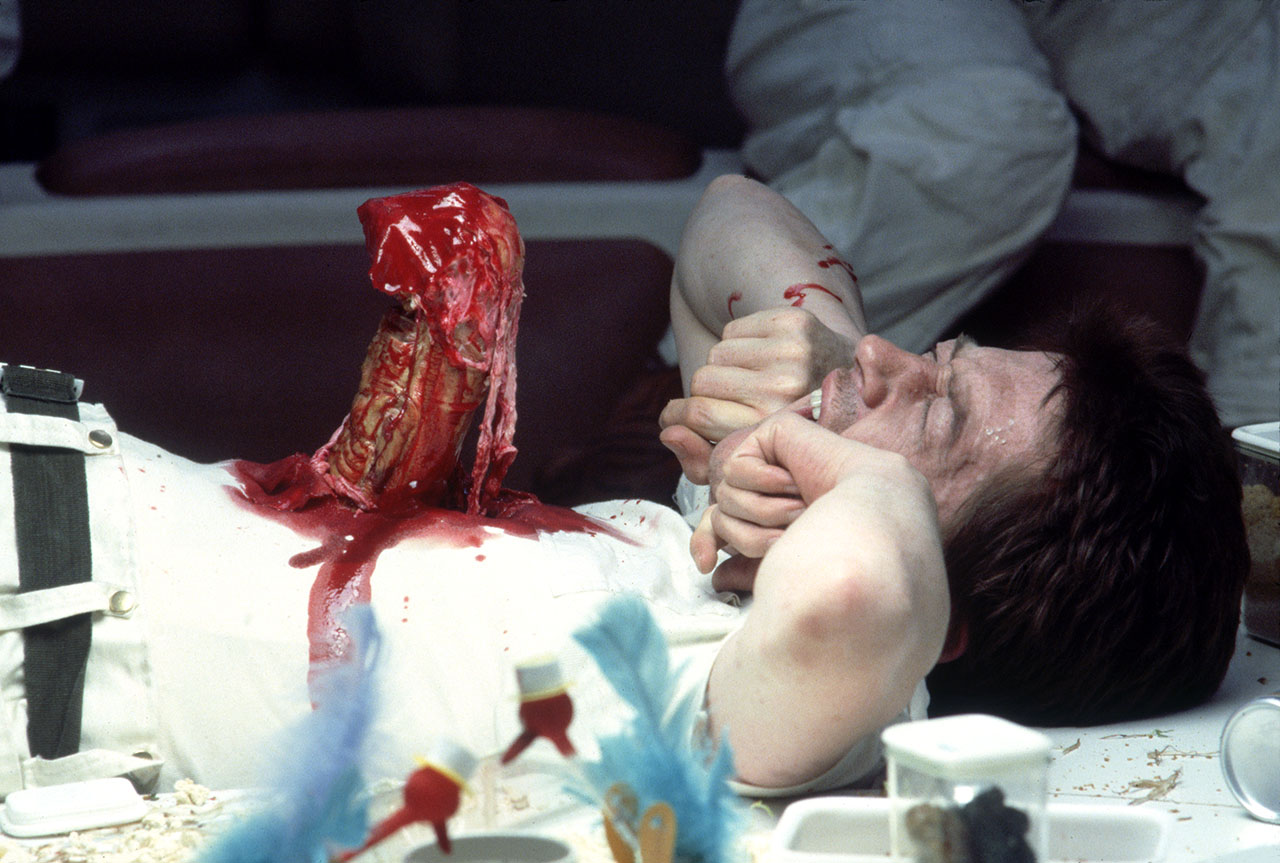 It’s difficult to say much about this scene, it seems like it very much speaks for itself. Shortly after his awakening in sick bay, John Hurt’s character sits down to a meal with his crew.

The conversation is jovial at first, only for Hurt to begin coughing. Many first time viewers likely assumed that the scene would culminate in some sort of zombification or at worst an alien illness. No one could have expected a newborn Xenomorph to erupt out of the character’s chest cavity and scuttle out of the room.

I can only credit the innovation of Ridley Scott and the efforts and designs of the late H. R. Geiger for bringing this scene to life.

6. Rosemary’s Baby “He has his father’s eyes”

You know, it’s strange how few people remember this film, considering that the supernatural pregnancy trope is still running strong these days.

From End of Days to Twilight, the idea of a mother playing host to some sort of powerful, often malevolent supernatural child still retains a lot of currency in horror. This trope has been in the past criticized as a sexist archetype designating power and agency to the father and supernatural child while treating the mother as nothing but a vessel.

Rosemary’s Baby is one of the few examples I can think of that integrates this into the horror. Rosemary has been betrayed by her husband Guy (of course his name is guy) and impregnated by the Prince of Darkness himself as part of some form of Faustian pact. Rosemary becomes increasingly unstable as she realizes she is being used and is seen as some sort of twisted Mother Superior figure by the Satanists who populate her apartment block. This comes to a head when Rosemary is shocked by the babies glowing red eyes. “What have you done to his eyes?” she shrieks, imploring the group. “Yes, he has his father’s eyes,” replies one of the cult dotingly, as the horrible truth finally dawns on Rosemary.

F.W. Murneau’s contribution to cinema cannot be overlooked. Florence Stoker, wife of the (then) late writer of Dracula, ordered that all copies of the film be destroyed due to a breach of copyright. Were it not for the existence of one fortunately preserved print, we would never be able to appreciate this film. The special effects and camera techniques (e.g. teleportation of Orlock) are extremely advanced by early 1920s standards and the original look (entirely dissimilar to the way Count Dracula is described in the original novel) of Graff Orlock still sends a chill down any viewer’s spine. The tension in the film perhaps reaches its peak in the slow stalking of Orlock upstairs in search of his victim.

Even more eerily, the vampire’s shadow seems to move independently of his body.

The Omen, up to this point, was somewhat enigmatic about Damien’s place in the scheme of things. That he was the Antichrist soon became apparent, that unfortunate accidents seemed to happen to those close to him was fairly well established.

But he seemed largely ignorant of the dark destiny in store for him. Thus, when his “father” is killed before he can kill Damien with a sacremental knife and Damien is adopted by the President, it is still somewhat confusing that we haven’t seen any signs of true evil in the boy. However, as the film closes and Damien stares at his human father’s grave, only to break the fourth wall and smile at the audience, we suddenly become aware that Damien knows exactly what he’s doing and it’s terrifying.

Okay, strictly speaking Trainspotting isn’t a horror movie, but it wrestles with some very serious issues. The portrayal of heroin addiction and its damaging effects on both the mind and the body becomes intimately clear in this scene.
Awakening from a heroin induced daze, our protagonist Renton notices fellow addict Allison screaming for help. As the others rouse themselves they discover the horrifying thing that has happened: the group was under the influence for so long that Allison’s baby passed away. Out of concern that there may still be some younger people reading this article, I have elected not to upload the image. Nonetheless the much imitated callback which occurs during Renton’s heroin withdrawal is one of the most disturbing scenes in modern cinema.

Jack Torrence’s descent into insanity, unforgettably portrayed by Jack Nicholson has etched itself into cinematic history, but I feel like many overlook the most frightening aspect of the film. Jack is tempted into killing his family through the phantoms of the Overlook’s residents from its corrupt past (run by shady character Horace Derwent) and is told “you’re the Caretaker, you’ve always been the Caretaker.” It seems, although his wife and child escape him in his murderous rage, that this has come true in the film’s closing scene. Jack can be seen in a photo circa. 1921, indicating that he has been assimilated into the legion of lost souls which haunt the Overlook Hotel.

1. Exorcist: Can You Help An Old Altar Boy, Father? The Exorcist is a very philosophical film, much more so than it is given credit for. Aside from the more visible symptoms of Reagan’s Exorcism, the theme of good versus manifest, satanic evil runs through the film.

Father Damien Karras, troubled priest and arguably hero of the text, struggles with this issues most vividly, unable to provide for his ailing mother, who dies after being taken in to mental care during the film. While struggling with this, Karras is asked by a homeless man for a dollar as he was “an old altar boy.” Much later, during a conversation with “The Devil” inhabiting Reagan, Karras demands proof of the assertion, only to have the words of the homeless man repeated.

As if that wasn’t enough, the entity claims that Karras’ mother is in Hell with it, offering to pass on a message. This scene hints at the most disturbing aspect of the film: the Devil is everywhere, and potentially everyone; and he’s taking notes.