Opinion: Binge Watching And Its Effect(s)

Opinion: Binge Watching And Its Effect(s)

I’m sure many are aware of the eponymous trend that is the subject of this post.  Setting aside some time to watch your favorite shows back-to-back is fast becoming a ubiquitous practice in the age of DVD box sets and more recently Netflix.  More than that, it would seem that television networks have gotten wise to binging (or marathoning), and have started running some shows in an omnibus form, particularly at weekends (although these are usually soaps.)  Whether this was ever anticipated is difficult to say.
Doubtless there will be many who lay claim to making such predictions, but you have to wonder at the sincerity of those who would do so.  Of course, you can make the case that watching a season of a much loved TV series is just a continuation of the movie marathon. 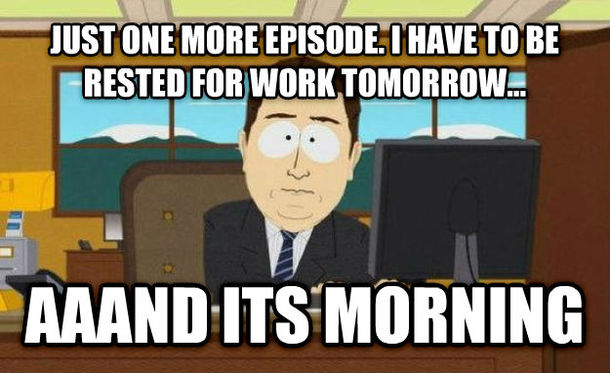 However, one can only join those dots with retrospection.  To take a particularly clichéd example, if you marathon the original series of Star Wars you’ll be there about 4.5 hours.  By contrast, a prime time US TV series can have seasons which are more than twice that.
Fifteen years ago (when The Sopranos was first released) such an undertaking would have seemed unfeasible to the consensus.  In hindsight the phenomenon seems common-sense, even obvious, but to point to some kind of telos after the fact is so easy that it appears spurious.  Still, anticipation notwithstanding, binge watching can be explained (albeit partially) upon reflection.
The simple reason binging started is money.  The cash that networks like HBO and then NBC threw at The Sopranos and The West Wing respectively made shows that looked and sounded better.  The plots were more compelling and unfolded with better lighting.  It seems, or it now seems, obvious that the audience would be so captivated that a marathon was a must.  Naturally, we cannot discount the writing and acting talents involved, money can’t buy everything; but of course money does not just buy…

Revealingly, shows like these are spoken of as cinematic, having the scope and scale of films (in fact many are now shot on 35mm-film).
On his blog, critic Mark Kermode attempted to conceive of how a big budget movie might ensure its financial (if not critical) success; it was dubbed The Flop Formula.  It seems that the success of the primetime network drama can, in part, be explained in similar terms.  What is the first tenant of the Flop Formula?
Well it’s not “You do not talk about the flop formula!”  It is that the money spent must itself be so considerable that it is mentioned in the press.  The rule equally applies to television.  Since the early days of The Sopranos, production values were (and remain) a selling point.  To see this in practice just look at HBO’s Game of Thrones; The Watchers on the Wall, Season 4 Episode 9, was widely reported as the “most expensive” episode yet, as a mere Google search will show.  Money doesn’t just buy; it talks too – though on that point I think we have passed through realm of the obvious and into the realm of the axiomatic.  With the profile of the shows in question raised more began to binge because more people were watching in the first place.
So, while binge watching might not have been predictable, it does not deny explication from an historical vantage point.  Still, there are questions that remain.  First, is what we view affected by how we are viewing it?  Second, is how we watch shows effecting how shows are now being made?  Both of these questions would be better served by expert opinion, perhaps somebody doing a PhD in the relevant fields.  Even so, there are a few observations that can be drawn out at a preliminary stage, even by yours truly.
With regards to the first question, common-sense tells us that to set some time aside specifically for a TV show implies a level of immersion.  I use the word immersion because, depending on what kind of show you are watching, escapism is potentially misleading.  Writer Stephen King has talked about writing in terms of throwing a ball; eventually it must hit a wall in order to rebound and therefore reconnect with the human.  If the writing has no rebound then it cannot be meaningful, compelling or even comprehensible. Escapism in its purest form is therefore impossible. Then again, it is fair to say that that some shows are more escapist than others: Adventure Time (a binging favourite of many) is more escapist than my recent binge Breaking Bad (one of the shows shot on 35mm).  The story of Walter White (played by Bryan Cranston) touches on contemporary issues of the Drug War, US Healthcare, the US legal system, police corruption (and ineptitude), the American Dream, immigration, and masculinity, parenthood (especially fatherhood) and marriage.  However, the show unfolds in such a way that is escapist, in as much as the story imposes an aesthetic unity on the events it comprises.  The chemical reactions and processes analogize Walter’s character arc, as well as capturing the viscosity of his counter-part Heisenberg and the plot, which by degrees grows increasingly volatile.  Even the title captures in two words the action that is spread across five seasons, action which has its centrality to the characterization of Walter White underscored by the title being equally alliterative.
Furthermore, for all the other-worldly places it features, Adventure Time always comes back to the friendship of Finn and Jake.  So, while escapism is a relative term, binge-viewers want to dispense with the humdrum chronos of daily life.  To add to the effect, many even use cushions and comforters to build “forts” to separate the world outside.  Certainly, the undertaking is more cost effective get-away than an airline ticket.
So we have certain motivations to binge: prolonged exposure to/experience of narratives that we find engaging.  Nevertheless, does a binge effect the way a narrative is received? Watching a lot of TV in a short space of time is going to stretch the viewer’s concentration and endurance (the colloquialism marathon is hardly accidental).  If you watch a show while it is airing, in real time so to speak, you have a week to ruminate on the events of each episode, discuss it with friends, etc.  So, in terms of content, more might well be less.  On the other hand, you may have watched the show in real time and re-watched in a binge.  Common-sense, it seems, has run its course.  From here the aforementioned PhD might pick up the pieces (preferably to the song of the same name by Average White Band, just for a goof!)
As to whether show runners are taking account of how their shows are being watched I cannot say.  They must be aware of it but if they have reacted, and how, is unclear.  Certainly, show-runners show no sign of dumbing-down in response to the way we watch.  That being said, there are potential ways they could make use of their audiences’ new customs.

My interest in the effects of TV binging was sparked by What the Flick.  For those not aware, WTF is a TV and Film review channel on Youtube, a spin-off from The Young Turks, the largest online news channel in the world.  Jon Iadorla (host and journalist) suggested that GoT’s The Watchers on the Wall, while not the strongest of episodes, was a good break for the main story in Season 4, especially if you were to watch season back-to-back.  To be clear, Iadorola did not imply this was a calculated attempt by the show-runners, indeed proving as much would be difficult.  If the episode in question had the certifiable function it would be spectacle; like every ninth episode of every season so far, The Watchers on the Wall is carnage.  Nonetheless, in a season of 10 episodes, episode 9 does provide a palate cleanser before the final course, due to its focus on one place for its entire duration (a GoT rarity.)  Either way, with binging now a known pastime, at least with a certain demographic, TV producers may be faced with a new consideration in future projects.
Of course the one aspect of a binge yet to be touched on is the social.  People that marathon a series or franchise of a weekend might be caricatured as loners with nothing else to do, but often that is not the case.  Much as individuals might want to separate themselves from the world outside (see above), they can still invite people over, and into their forts in some cases.  You talk between episodes (or during, depending on house rules).  The event could be a bring-a-bottle affair. If in fact you are alone you might need to catch up on busy work and decide something colorful would make it a little less tedious.  Failing that, a binge might be part of a lazy or duvet day ritual, where you don’t want to see anyone unless they appear on a screen.
In retrospect, anticipating the effects of binge watching may well be as difficult anticipating the phenomenon itself, owing in large part to it being so modern.  Still I am due a reunion with some friends and a binge is likely on the cards.  Should the occasion arise, then at this and all subsequent binges I’ll bear the above in mind… And all the while, I’ll wait till that hypothetical bright-spark PhD does the research that’s above and beyond me.

Declan discusses the five stages many (himself included) go through during and after a marathon!

0
0   0
previous Robin Williams Passes Away At 63
next Review: Avenue Q