Any lover of comedy ought to be familiar with Armando Iannucci. From the spectacular cringe of Alan Partridge to the foulmouthed tirades of Malcolm Tucker, the man’s contribution to British television, especially in the realm of satire, has been potent.

His first outing to film adapted his Thick of It characters to the big screen. However, the adaptation notably raised the stakes for the bumbling politicians of DoSAC. Rather than irregularities in immigration numbers, In the Loop dealt with the far heavier topic of the Iraq War. For his second cinematic outing, Iannucci turned to still more severe Soviet Russia as his canvas.

The Death of Stalin features a power struggle in the aftermath of the titular dictator’s death. Shocked by his sudden stroke, the Communist Leadership is at a loss. Surprisingly, much of the film’s comedy comes from true events. Most Soviet protocol relied on Stalin’s orders, meaning that his closest advisers froze up when he fell sick. Indeed, it took twelve hours to assemble the Presidium to vote on whether to fetch a doctor. Once this motion passed, they realised that most of Moscow’s doctors were either dead or in Siberia. This meant that a number of quack doctors treated Stalin instead. This lack of direction without the deceased tyrant provides great comic energy throughout the film.

An atmosphere of panic and paranoia additionally pervades the film from the first scene. It is difficult to make any piece of fiction, even comedy, without acknowledging the immense human tragedy of Stalin’s regime. The film makes little effort to conceal the brutality and violence of the regime. However, the truism that “tragedy plus time equals comedy” definitely applies here.

The fear of surveillance, that even the slightest critical thought will be intercepted (which haunts Orwell’s 1984), is converted to wonderful comic energy by Iannucci. Even after Stalin’s death, each character is looking over their shoulder as if the man’s spirit lingers on, taking notes. This is excellently embodied in Michael Palin’s Molotov, who struggles with endless doublethink to justify the actions of Comrade Stalin even when goaded with the imprisonment and (presumed) execution of his wife.

The scramble of these characters to display consistent behaviour in an inherently inconsistent political world makes for endless comic tension. Perhaps one of the best examples of this is in the film’s opening scene. During a dinner with Stalin, Malenkov errs in asking about an old war friend who has since been sent to the Gulag. Walking out of Stalin’s house, the exhausted statesman admits he no longer remembers which comrade is alive or dead. 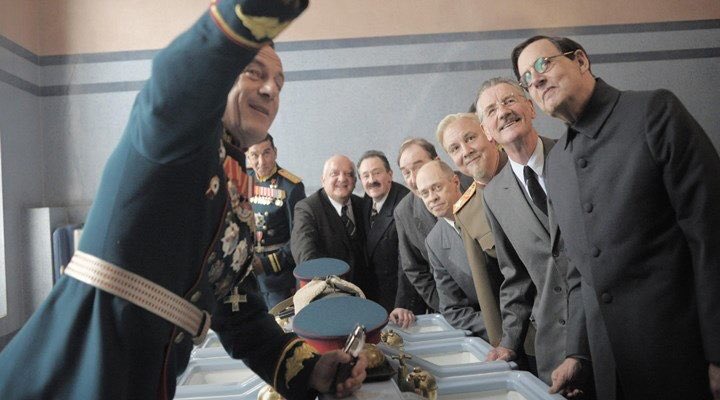 Jeffrey Tambor deserves props for his performance as Stalin’s beleaguered successor Malenkov. Tambor portrays a bumbling statesman who projects a palpable field of anti-charisma in every scene. Nevertheless, he attempts to replicate Stalin’s cult of personality as the USSR’s new leader with pathetic results. Steve Buscemi is similarly impressive as Khrushchev. I found myself wondering if I was going to see the comical Buscemi of Adam Sandler‘s films or the stone-cold Buscemi of Boardwalk Empire. Khrushchev appears to be a winning combination of the two. Beginning the film as Stalin’s resident clown, he gradually evolves into a ruthless autocrat.

However, it’s the talents of Simon Russell Beale which truly shine through. Beale plays Beria, head of the NKVD and mastermind behind much of the purges. Previously Stalin’s closest associate, Beria quickly jumps ship and seemingly recreates himself as a reformer. The ambiguity of this motive, combined with Beria’s bloody past, fills every scene with tension. Stalin’s surveillance state lives on in Beria and the threat of the Gulag hangs in the margins of every conversation with him. Beale provides a presence which is nothing short of demonic. He is the last remnant of the purges who must be vanquished to ensure the USSR’s future.

Jason Isaacs presents an energetic foil to Beale in the form of General Zhukov. Isaacs injects the military man with a strong Yorkshire accent which fits excellently. A Soviet war-hero, Zhukov was pivotal in seeing the invasion of Nazi Germany in 1945. As a result, he’s one of the few characters in the film utterly unafraid of Beria and the secret police. “I took Germany. I think I can take a flesh-lump in a waistcoat,” he summarises glibly.

My only criticism of the film is the somewhat redundant role of Stalin‘s children; Svetlana Stalina was certainly used as a political pawn with little of her own personal agency. As a result, the film does little with Andrea Riseborough, aside from having her lectured by Khrushchev and Beria. Similarly, Rupert Friend seems to serve only as a drunken buffoon. I would have enjoyed seeing more about these children and the effect of living in their father’s shadow. These issues are largely forgivable, however. Even if Stalin’s children prove underused, they ultimately serve to prove the intended point: Stalin’s rule would not become a dynasty.

Overall, I really enjoyed The Death of Stalin. Between an excellent script and a myriad of brilliant actors, I wouldn’t miss it for the world. In today’s world of alternative facts and fake news, the film’s focus on self-censorship and propaganda is alarmingly current.