Review: Guardians of the Galaxy

Review: Guardians of the Galaxy

So, it’s finally here. Easily one of the most hyped and talked about of the comic book films for 2014, Guardians of the Galaxy has opened in theaters this weekend. While it hardly needs to roll in massive money for the company (no one Marvel Studios film does, such is the self-contained economy they’ve created for their movie-verse), it does need to succeed to prove that if risks are taken with lesser known characters and a lesser known cast, they can pay-off. Having previously only been involved in films with a fraction of the budget and promotion power such as this, director James Gunn has been entrusted with taking the ever growing Avengers continuation into the stars with a science fiction blockbuster that looks to be heavy on both the action and the emotion, and, refreshingly, succeeds at both.

Beginning with Chris Pratt (Parks and Recreation) as lead Guardian Peter ‘Starlord’ Quill, its made very clear very quickly that this is a film that wants you to laugh along with it as much as it wants to be invested in the characters and the story. Quill is an outlaw whose ego is bigger than his reputation who, while on a routine job, finds he has become accidentally embroiled in a potentially galaxy-affecting catastrophe that he also, conveniently, might be in a position to disrupt. Comedy and action come hand-in-hand in early sequences and are sustained through-out the two-hours, giving a more than subtle nod to Joss Whedon’s Firefly, especially when the space opera elements begin to seep in as both the crew of merry men and the story expand.
Each character’s entrance comes with its own expansion on the narrative along and by the time we’ve met everyone, it’s a wonder how they can expand visually and dynamically on the action that came before. Rocket and Groot (voiced by A-listers Bradley Cooper and Vin Diesel) have a very finely-tuned form of controlled chaos follow them at every turn, Gamora (Zoe Saldana, Star Trek Into Darkness) manages to provide the more serious center for the group, but the stand-out performance is definitely Dave Bautista as Drax the Destroyer whose performance is surprisingly impressive as the brutal but emotional warrior on a mission of vengeance. The haplessness of the crew isn’t lost on them and their self-aware satire provides some of the biggest laughs of the feature.
Not to understate their enemies notability by any means, as cat-and-mouse becomes save-the-galaxy with main villain Ronan the Accuser (Lee Pace, The Hobbit) giving a horrifying, screen-capturing presence. Flanked by Karen Gillan (Oculus) in what is perhaps the most understated role as Nebula, 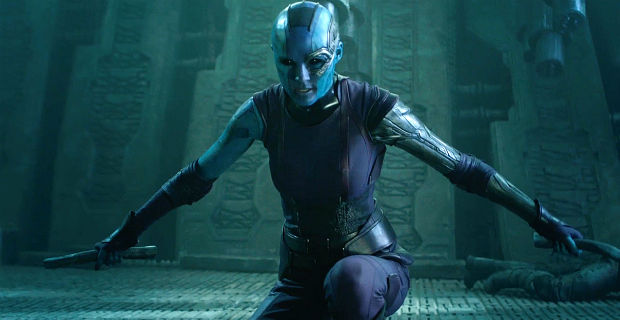 their characters are that rare breed of antagonist where the film could easily have been two hours of their perspective and would have been just as interesting. Unyielding in their efforts, the chaos which seems to follow our Guardians meets nicely with the destruction that Ronan and co. are so adamant to create and all the characters and worlds that are caught in the crossfire make for some absolutely breath-taking visuals and scenes.
Which is to say, the cinematography and special effects showcased here are amongst the best Marvel have used. Taking visual cues from the Thor films with the creation of an artificial realm and the subsequent destruction of it in battle, last year’s Thor: The Dark Age feels like a only a beta test for what they managed with this production. The worlds visited and explored (read: fought through) are enormous and really provide that sense of wonder in the cinema. You want to explore these planets and ships and races, you want to know more about all the lore and each and every incident and story that’s touched upon in the dialog. If ever a movie deserved an expansive accompanying action game, its this one. (Mass Effect but with Guardians of the Galaxy instead, in case anyone is taking notes!)
All anyone wants out of this film is great action featuring a hulking tree-man and a raving raccoon, what they’re is something more. Not only is this a great, smart comic book film, its one of the best blockbuster science fiction movies to hit theaters in a long time. Keeping a smooth pace with witty dialog and action scenes that work with the mood and accentuate the plot, rather than being an intermediary break from it. Great performances all around and a firm appetite and set-up for a sequel makes this a must-see on the big screen.

0
0   0
previous First Teaser Trailer for Disney's Into The Woods
next Review: ShipAntics