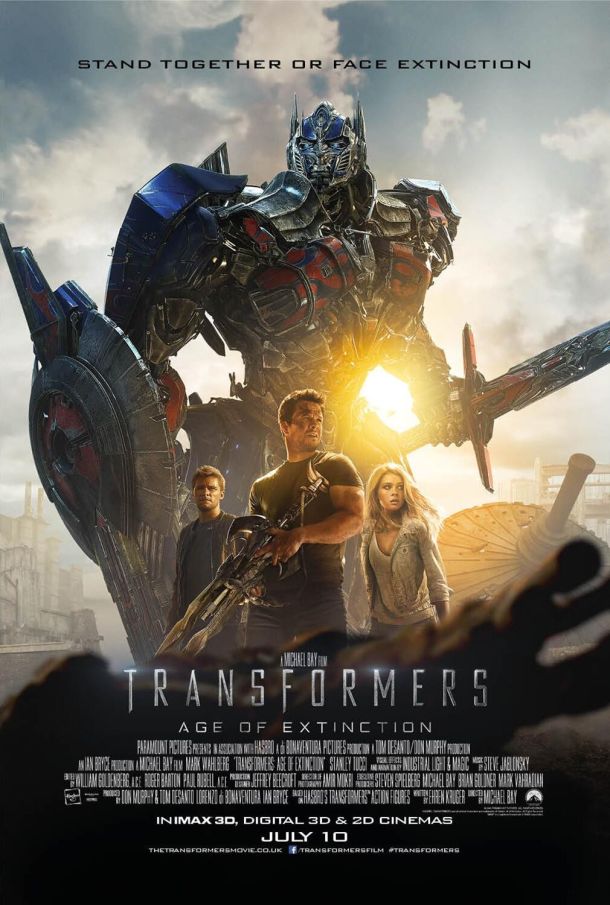 “I have this idea,” Michael exclaimed boldly while drinking his over-priced whiskey and giving his wife her hourly death stare. “With Transformers – Age of Extinction, we must tell the people who truly controls them. We must let them know as men. As American MEN. That we are in control. We are the greatest, and we will not be stopped under any circumstances. The children will learn, the parents will learn, everyone will LEARN. They’ll think it’s all about explosions, but really, we’re setting an example of what NEEDS to be said and done in modern cinema. It’ll be long, and it’ll be tough, but with God on our side we will succeed!” Michael knocked back the last of his whiskey and prepared himself for the questions. He knew they were coming but he was prepared, oh how he was prepared. “But Michael, sir,” The first executive chimed up, glancing away from his pile of money only for a second. “The previous film made us so much money, but the general public weren’t too happy after the fact. How can you guarantee more than the children will see your latest masterpiece!?” Michael smirked. He had it ALL figured out. “It’s simple, we hire John Goodman and Ken Watanabe. The people love John Goodman and Ken Watanabe.” The chorus rang through, just like he planned. “IT’S BRILLIANT!” They shouted as they literally began eating money. ‘AND,’ this was Michael’s coup de gras, the icing on the proverbial cake. ‘We include robot dinosaurs for the final act. IN CHINA.’
The room exploded, and so it was done. Transformers – Age of Extinction would be the film that would see Michael Bay go down in history, and he would write the history books on his own terms.

Or at least, that’s how I IMAGINE the board-meetings went in the run up to pitching this piece of cinematic dirge. It’s somewhat difficult to fathom how anyone in their right mind would give the all clear for some of what’s contained in this film to be made, with actual money spent on people’s bloated pay-checks, but here we are. First thing’s first – this is the fourth film in a franchise whose legs were already barely able to stand-up straight. Combine a bad series with the basically-always-bad fourth film and you’re in trouble. But it’s okay, right, because they replaced Shia LaBeouf with Mark Wahlberg and replaced whats-her-face in the third one with another whats-her-face who looks even younger and smuttier, because the problems were obviously intrinsically linked with how good the acting is. And they’ve got dinosaur robots. Sort of.
So, after the third one’s battle, the humans have decided to hunt down the transformers because their war is destroying our world. The robots are all in hiding and single-dad-genius Mark Wahlberg finds Optimus Prime and thus brings the FBI’s attention to his door and we find out the FBI are the bad guys who have a deal with some headhunter alien robot guys who want Optimus Prime. Wahlberg and his daughter, the generic 17 year-old whose always wearing make-up and exist SOLELY to be saved by her dad or her boyfriend, then end up meeting up with her boyfriend and going on the run and the plot just sort of happens from here. At no point do any of the characters, human or robot, sound or act like they’re fully in control, even though we have the CEO of a huge company and an FBI leader-guy (played by Kelsey Grammer because the money MUST have been good) directly involved. I mean, they speak authoritatively, but nothing they ever say goes any way close to plan so you wonder why they were ever hired to do anything more than clean the toilets. The idea of caring about any of them surviving any of the battles becomes less about wanting a good guy to live and more about ‘if they’re all killed, perhaps the film will end!’

But it won’t, because this thing is 3 hours long. 3 hours. When your action scenes feature John Goodman and Ken Watanabe voicing killer robots with the promise eventually a robot dinosaur is going to come tearing through the battlefield and the action STILL feels long and taxing, you’ve seriously done something wrong. There’s one particular scene somewhere towards the end of the second hour where Goodman’s transformer is blowing stuff up, and it’s great and fun and you’re totally with it.. Until it lasts fifteen minutes and the plot hasn’t moved an inch in the interim. This happens again and again. Some of the action even made me feel a touch nauseous because of how confused it felt and the lack of cohesion or sense of relativity. By the time the dinobots are introduced, which is in the last half an hour, you’ve very much stopped caring and started wanting an ending. Any 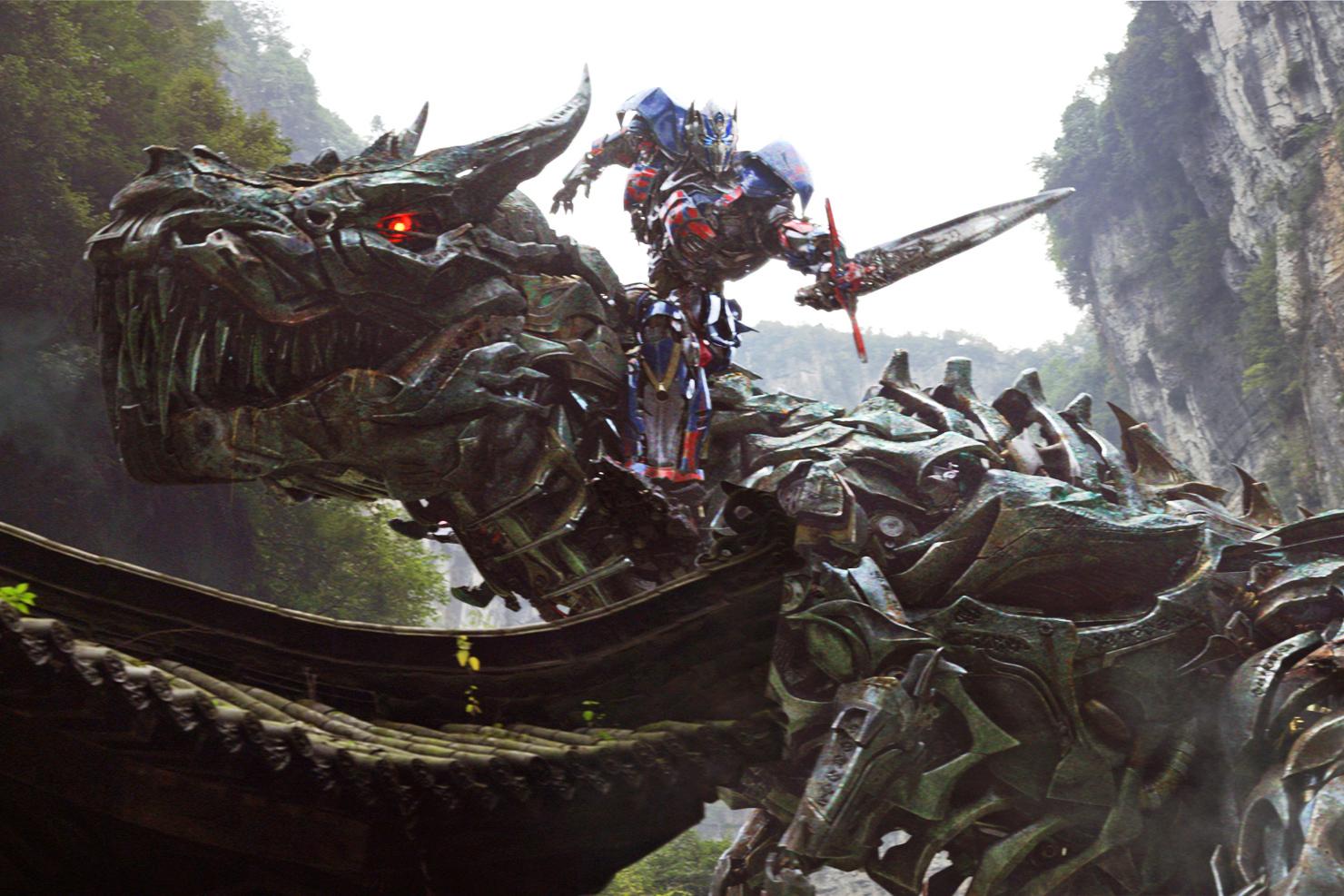 kind of ending. Just an end. But with all that said and done, the bad action, basic character design and flawed narrative still aren’t the worst part of this film.
No, the worst part is actually relatively early on. The 17 year-old, her boyfriend, who is possibly the most racist ‘Irish’ character I’ve ever seen on screen, and her dad are having an exchange in which the boyfriend justifies, by way of Texan law, being in a relationship that is considered statutory rape. You read that right. The entire plot justifies their relationship that the film, early on, establishes is to be considered under-age, unless you live in Texas. At no point is the girl ever portrayed to be capable of making her own life choices or being anything other than a damsel in distress or there for good looking posters. Even in the one sequence on an alien ship where she’s the main perspective, and the imagery leans a little bit towards David Cronenberg, she still just begins shouting ‘HELP ME!!!’ when her boyfriend and dad arrive and becomes completely helpless once they are re-introduced. This weird sexist female subservience remains throughout the film, leaking into every plot-point and sequence so that it all feels just a little bit disgusting and perverted.
Avoid this film, please. It’s not just bad, it’s insultingly bad and you deserve better.