Get A First Look At Tom Holland As Nathan Drake

Assassin's Creed Valhalla Expansion Will Sail To Ireland Next Year

PlayStation Show-Off Some Of The PS5 User Interface Features

Ghost Of Tsushima: Legends Is A Free Update Coming This Week

James Bond And Dune Get Moved To 2021, As More Movies Get Releases Pushed

So, once again I’m going to sound like the most boring person ever because I’m sick again! Yay for my immune system, right? Yep, I’ve got a chest infection which means I’m staying indoors and taking my meds in order to be okay for MCM Dublin next week!

So tomorrow I’m going to spend my day working on my Bombshell Poison Ivy for MCM next week in Dublin. I’ve already styled her wig but I still need to do a big makeup test because I’ll be painting myself a light green, along with figuring out her makeup as a whole.

Not to mention, I’ve also gotta get my eyes used to wearing contacts again! It may not sound like an awful lot, but I’ll probably be at the whole thing for about two to three hours in order to make it as good as I want it to be.

I’m also going to be watching a lot of Shadowhunters on Netflix. I tried watching the show before with my Mam but we got three episodes in and turned it off because of the main actress. But of course I’ve been pulled back in and I’m now eight episodes into the first season and I’ve gotta say, I’m kinda hooked already.

I’m a sucker for kitschy shows like this one but I can’t really help it. I never read the books, but I had seen the film and so far, well there’s some actors I’d rather from the film, and some I like better in the show. Anyone else watching Shadowhunters?

Still gonna be inside recovering, but I’m also going to be finishing up reading Green Lantern: Brightest Day seeing as how I read Green Lantern: Blackest Night already this week.

It’s completely ignited a passion for Green Lantern that I honestly didn’t have before. Hal is damn funny and quite endearing, and it’s easy to enjoy the character so much more than that stupid film that we won’t even mention.

I’m also absolutely head over heels for Carol Ferris, even as Star Sapphire. Her relationship with Hal is tempestuous and almost heartbreaking in a way, but I damn well love her, and love them. In fact, I’m currently working on a Star Sapphire cosplay for the future, along with a fun idea for a Carol Ferris alongside my boyfriend who will be cosplaying Hal and Green Lantern at one point. 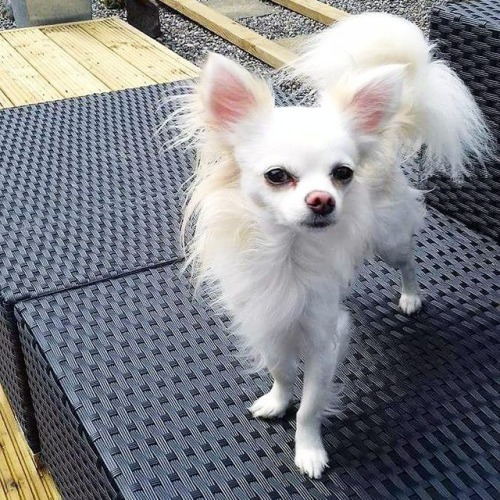 As for Sunday, well I actually don’t have much planned except keeping an eye on my Masters applications seeing as how they’re being reviewed right now by the colleges I’ve applied to. So fingers crossed for that! But I’m also taking my pride and joy, Gizmo, to the groomers to get a little tidy up.

He’s my little white teacup chihuahua and honestly, I adore him so much. We got him in November of 2015 and he’ll be two in July, and yes I’ll probably have a little mini party for him. And yes, I am one of those people. I’ll also probably be skyping my boyfriend, as I do most Sundays, or at least try to. The unfortunate con of dating someone who lives in a different country, but hey, there’s way more pros than cons, even if we rely on skype so much!

Have you guys got any plans for this weekend? Do you all have a pet who you absolutely adore? Let us know!