As I mentioned previously in this very column (yes, you should be keeping up), the Japanese don’t really see Christmas as a very big deal. Certainly not in the same way us god-fearing western nations do, but that doesn’t mean they don’t have a big winter celebration to look forward to as the cold weather sets in. On the contrary, New Year’s Eve is as big a celebration as you’re ever likely to find in Japan.

I’ve also mentioned before (seriously, aren’t you bookmarking every article?) that the local train networks often bear the brunt of the frankly ludicrous Japanese work ethic by having to run late and start early. Well, on New Year’s Eve, all pretence goes flying out of a yamanote-line window as they’re expected to run non-stop all night, which of course they do, because not living up to society’s expectations is punishable by public passive aggressive teeth sucking in this part of the world. 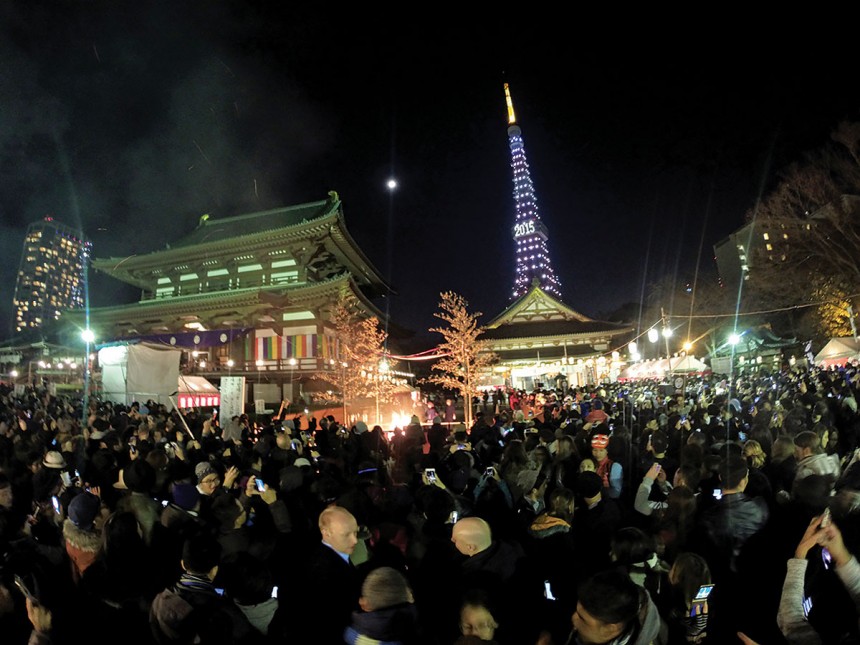 Japanese people like to ring in the new year at night, you see, and part of it involves visiting a temple or shrine as close to midnight as possible to pray for good fortune in the year ahead. Having trains run literally all night, as opposed to just most of the night, does make being out and about feel a lot less obligatory, and visiting a shrine or temple on New Year’s Eve at midnight is indeed a beautiful experience.

If you’re Japanese, that is. Or if you happen to share their love for queuing.

Trying to get into any shrine or temple at midnight on January 1st is like trying to get to the front of a buffet line at the Baldwin family barbecue. At the more popular shrines, the lines are built up down the streets outside the entrances by 9pm on New Year’s Eve and, while there is something bizarrely entertaining about watching hoards of people queue for hours to throw coins at an altar – a very real part of Japanese New Year tradition – there’s also a lot to be said for saying feck that for a game of shinto-soldiers as the shrines stay in New Year mode, known as Hatsumode, up to January 10th in some parts. And, should you wander into the streets on New Year’s Eve, you will see the Japanese let go of their inhibitions in ways you will not believe.

Walking around Shibuya on New Year’s Eve is pretty much exactly like walking around Temple Bar on Paddy’s Day. Utter alcohol-fueled carnage spills from every street directly into your face and good luck taking refuge in a bar or club, as this densely populated urban sprawl has more people in it than it knows what to do with, and none of them want to be outside either. I don’t mean to sound negative, however, as it’s actually rather amusing considering how restrained most Japanese people are every other day of the year. Seeing them lose themselves in revelry is almost poetic. What’s rare is wonderful, as they say.

And, really, there is something magical about starting the new year out in the open. Rather than being confined to a crowded club or a smoky bar, exposed to the elements and surrounded by your fellow man taking part in whatever theistic or pop-cultural ritual you choose to take part in is truly liberating. The new year literally arrives as physical wind, heralded by more than whoops and cheers and bottle-clinks, but by the world itself changing before your eyes, or at least before you’ve noticed.

That said, it would be difficult to appreciate all that if you had to leg it for a train immediately afterwards so maybe the Japanese are on to something after all.