So if you’ve been living under the video game equivalent of a rock and still binging on Metal Gear Solid V like I have, you may be unaware of the Rainbow Six Siege Closed Beta going on right now.

For the uninitiated, Siege is what Ubisoft are considering their successor to the cancelled Rainbow Six: Patriots. Ubisoft are going for a multiplayer-only formula for the first time with an emphasis on the tactical experience the series is known for as well introducing new features such as the destructible environment. What we know so far is the game will launch with eleven maps that have day and night versions, three competitive game modes and one cooperative mode as well as future downloadable maps being free.

The beta going on right now is available those who pre-ordered the game, received a code at a convention or donated money to Extra Life. It features fifteen “Operators”, three maps with day and night versions, two competitive game modes and the cooperative-focused terrorist hunt. The competitive modes available in the beta are your standard team deathmatch fused with an objective or in this case a bomb-defusal or control point tug of war. The bomb-defusal mode opens with the attacking team sending in remote control drones to scout and find two bombs planted by the defenders. The drones are vulnerable to fire, but can sneak in and out through various crevices scattered throughout the levels. Meanwhile the defending team must build defences and keep an eye out for drones. If all drones are taken out or fail to find the bombs, the attacking team must go in blind and find the device themselves unless they use their extra remote drones which when activated leave the user vulnerable to attack. Oddly enough in the twenty plus matches I’ve played, I haven’t been matchmade into a single game of point control. The servers had been having odd issues, so the matchmaking always sticking to bomb-defusal may have been just a glitch. 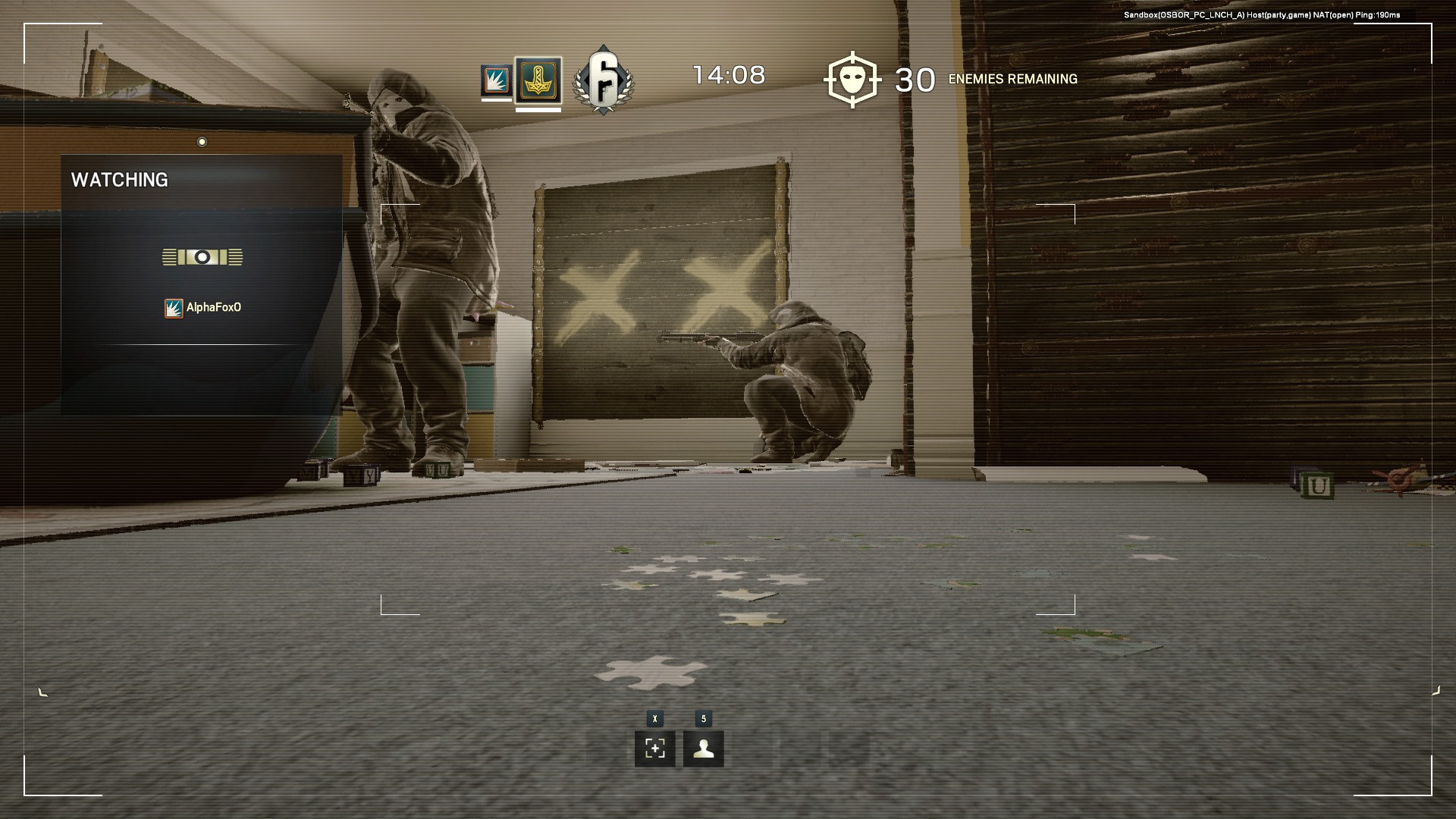 Now onto the “Operators”. To put it simply, Operators are customizable classes with unique abilities. You unlock them with “Renown” earned from completing the tutorial and playing matches and games of Terrorist Hunt. These Operators are drawn from some of the world’s top forces like the FBI, SAS, Spetsnaz and GIGN, each with their own set of weapons and tools to choose from along with abilities tied to the character themselves. To name an example, let’s talk about Blitz: 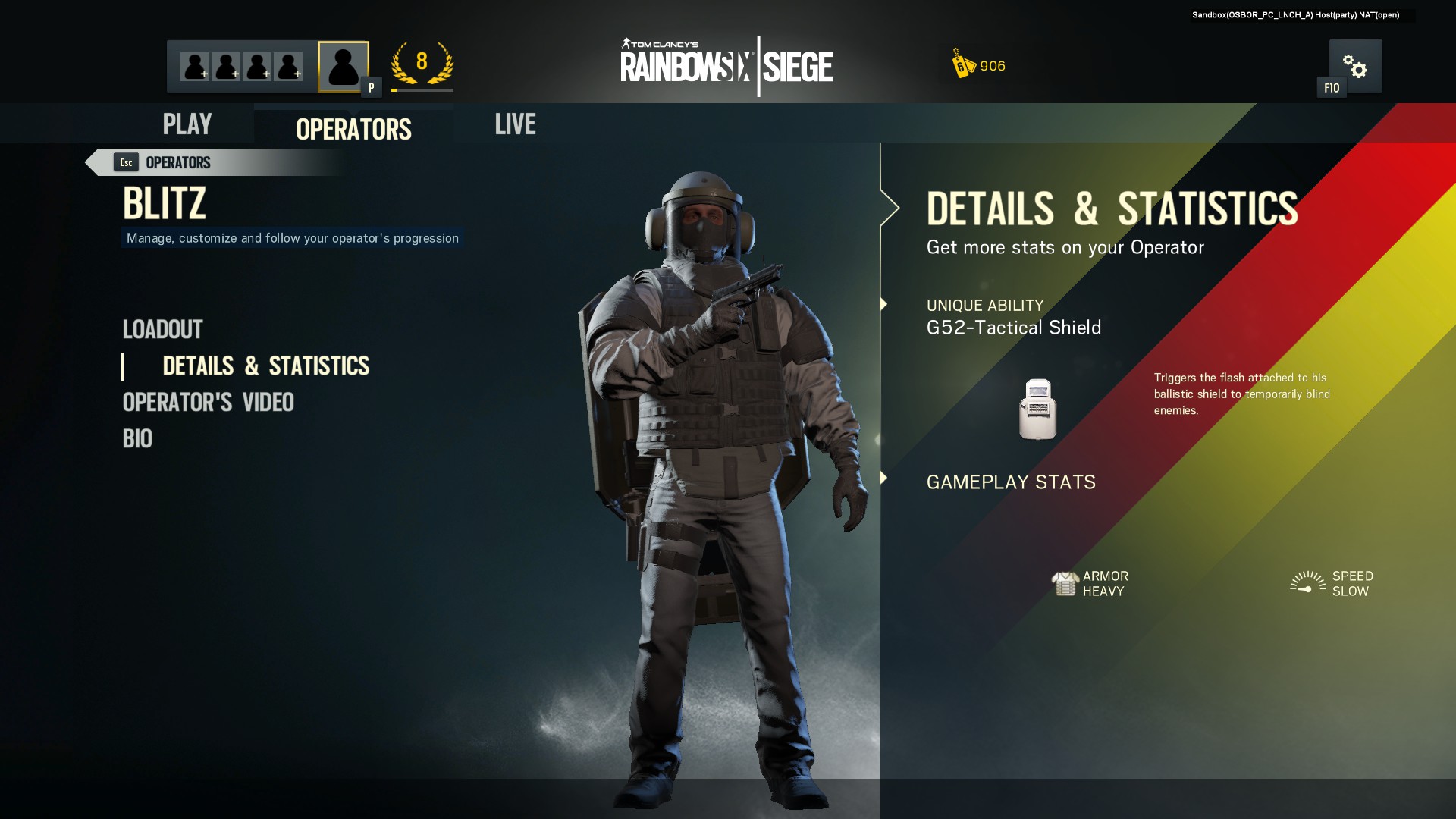 He’s an Operative that carries a riot shield equipped with a flash on the front that blinds enemies when activated. The trade-off with his shield is that he’s only able to equip a pistol and an additional item and when a player using Blitz wants to aim down the pistol’s sight he must expose himself over the shield. Another issue with Blitz is his heavyset armour which can mean he’s slow to move not to mention loud when he does, but we’ll get to that later. So far I have played as four different Operatives, each with their own pros and cons and the overall balance is impressive for the amount of variety and adversity the game offers between these characters. I had a little trouble against shield-wielding Operatives, but that can probably be chalked up to poor performance on my part.

The three available maps included in the beta are your run of the mill Rainbow Six-style showcase but the destructible environments and floor layouts are intelligently designed with various pathways coupled with the ability to blow a hole open in almost anything to get a line of sight on the enemy or flank barricaded foes and it’s all incredibly satisfying when a plan is pulled off without a hitch. It even adds to the excitement when you’re thrown a curveball and suddenly you (the attackers) are outnumbered and have to think and move fast to put yourself back into a place of control or even temporary safety. 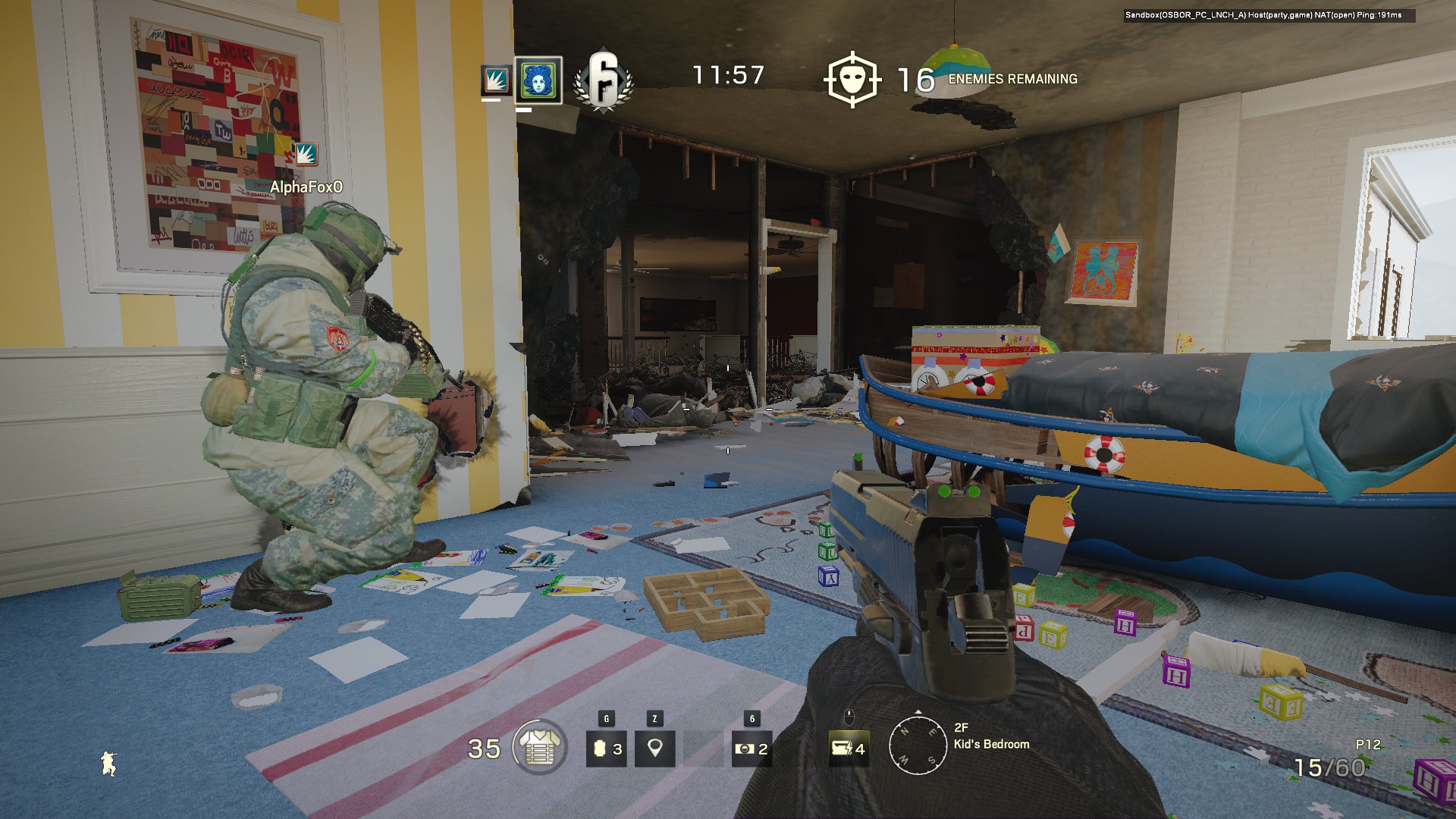 Something I didn’t expect about Siege’s was the incredible sound design. Usually sound design feels like such a background thought in my head when it comes to a lot of games, especially shooters. Siege takes the idea of sound and plays with it to the point of becoming one of the core parts of the experience your attention should always be directed towards. You can hear footsteps around the map indicating where enemy attention may be focused to, the beeping of explosives, the gentle whirring of the wheels on a remote drone used to recon the enemy and the various explosions and crashes of debris as the environment splinters and crumbles apart amidst gunfire and explosives. It all plays a very intentional role in communicating with your team and getting a grip on where an attack might spring from and it works in a really cool way.

Siege definitely harkens back to a lot of what made Rainbow Six a thoroughly enjoyable experience and introduces concepts that feel fresh on a series long awaiting a new title. The plodding but calculated movement, the tense shootouts, the emphasis on team communication (I’ll mention now, in the approximately twenty matches I played, around 4 of them had players who weren’t using microphones), the necessity for a well-thought plan with about three backup ones certainly shows that Siege has the potential to be a hit. The beta’s only issues stem from sometimes broken matchmaking and a lack of punishment for players leaving, but other than that it felt really solid.

But it’s still a beta. A great one, but its early. My own worries about Siege extend to balance with what I presume will be paid DLC in the form of new Operatives and whether or not this game will have a tail end good enough to keep people wanting more of it. A multiplayer-only game has a barrier to overcome when it’s full-priced and I don’t think Ubisoft can afford to gouge people with launch DLC and post-release content that has a long wait time. Evolve couldn’t quite hack it, but playing that and now Siege, while completely different games in a lot of ways, Siege I felt right out of the gate had a lot more promise and still has its hooks in me even after twenty-plus matches. If you’ve got a chance to try out the beta before it ends on October 1 I suggest do and bring a friend or two. It’s early yet for Rainbow Six Siege, but it definitely has the early promise to deliver an incredibly solid shooter.

0
0   0
previous Yesflix/Noflix: Heroes Of The East Vs. The Grandmaster
next Gif Essay: Get Ready For Halloween!