Home Featured Review – Doctor Who: “Journey to the Centre of the TARDIS”

Review – Doctor Who: “Journey to the Centre of the TARDIS”

Review – Doctor Who: “Journey to the Centre of the TARDIS”

Last week, I opened my review of ‘Hide‘ by saying that it was the best episode of Doctor Who’s Series 7 thus far.  I eventually went on to say that I would probably be eating those words following this week’s episode, and it has proved me completely right. So, without further ado, let’s get right into what was my most-awaited episode of the series, and is currently my favourite one, ‘Journey to the Centre of the TARDIS‘!

THAT WARNING THAT I DO EVERY WEEK: Potential spoilers lie ahead!

For me, any story of the Whoniverse that focuses on the TARDIS is nothing but a good thing. Stories like the Tom Baker classic, ‘The Invasion of Time‘, audio stories like ‘Zagreus‘, and indeed, last series’ episode ‘The Doctor’s Wife‘ by Neil Gaiman, an episode which ranks as my uncontested all-time favourite. As I’m sure you’ve gathered at this stage, any story which explores that mad machine in detail tends to be pretty wonderful indeed, and I’m delighted to say that Steve Thompson’s take on the TARDIS more than lives up to expectations. 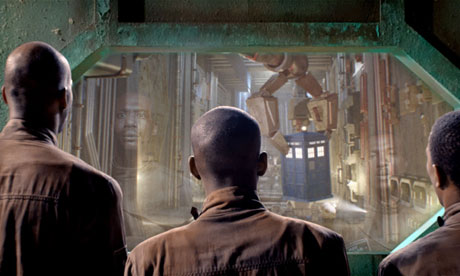 The episode gets things set up nice and quick. We open with a salvage ship, looking for scrap in the depths of space and crewed by this episode’s secondary cast, the Van Baalen Bros, Gregor, Bram, and Tricky, an android. Their ship has detected the TARDIS, which Gregor reckons will make for good scrap, and they begin the process of locking onto it and dragging it aboard. Meanwhile, aboard the TARDIS itself, the Doctor is attempting to make Clara and the TARDIS talk, in order to work out their lingering issues (a very funny little sequence). Suddenly, the TARDIS is caught in the salvage ship’s magnetic trap, something which damages it immensely as it is pulled aboard. When the Van Baalen Bros approach it to begin salvaging it, the Doctor is outside the TARDIS, briefly having been knocked unconscious. However, Clara is still inside, and she is in terrible danger. The TARDIS’ unique internal geography has trapped her, time is leaking freely throughout the corridors, rooms are exploding…and something else is in there with her. The Doctor, fully aware of how much danger she is in, immediately press-gangs the Van Baalen Bros into helping him save Clara before it’s too late…

All in all, a thoroughly-exciting beginning to what proves to be a thoroughly-exciting episode. This is definitely one of the episodes that you’ll have to watch a couple of times to take everything in properly, and it’s extraordinarily clever. The plot makes excellent use of the TARDIS’ ability to manipulate its interior, as well as warp its own time, and there are quite a few moments throughout that foreshadow the episode’s resolution, even though it doesn’t immediately seem like it. It’s an extremely creepy and atmospheric episode, to boot. This is one of those episodes that really shows us that the TARDIS, while it may be wonderful and incredible and a little bit magical, is not as safe a place as you’d think. The TARDIS is an entire dimension unto itself, a bizarre, ancient place where physics and common sense are optional, and to make things worse, she’s a little bit insane into the bargain. This episode shows off her scarier side, and it works all the better for the unnerving feel of the episode.

Aside from all of that, the episode contains a wealth of little nods to the past and references to things. Clara’s trip through the TARDIS shows us many things that have either been mentioned before or alluded to, as well as showing us certain things that we have seen before and have apparently ended up in the TARDIS. There are voices from the past, rooms that we’ve seen before in new forms, the swimming pool (which is looking very good!) and a most curious book. It’s an episode filled with this sort of thing, and it’s a joy to pick them all out and spot them all.

Looks-wise, the episode is fantastic. It’s a dark episode, probably one of the darkest of Matt Smith’s run thus far, and the looks reflect it. It’s oppressive and claustrophobic at most times. That said, we do see some of the TARDIS’ typical internal beauty. The library will make anyone give a little gasp, the TARDIS’ Architectural Reconfiguration system is as bizarre as one would expect and looks amazing, and the new-look Eye of Harmony, making its first return since the 1996 movie, is stunning. The Van Baalen Bros’ ship, too, is very cool-looking, rather reminiscent of the UNSC ships from Halo in a sense. There are a few other treats to see, but I won’t spoil those ones.

Cast-wise, Matt Smith and Jenna-Louise Coleman continue to be excellent as ever. This is an episode where there are a few very tense moments between the two, something we haven’t really seen up until now, and it’s interesting. Coleman generally plays terrified throughout this episode, dealing with everything from the ghastly creatures that stalk the TARDIS’ corridors to malevolent architecture, and she pulls it off perfectly. She’s still very much Clara though, as confident and witty (and stunningly pretty) as before, and seeing her react to this new side of the TARDIS is a treat. Meanwhile, Smith is on absolutely top form throughout, with his precious TARDIS going haywire all around him. He’s serious and severe, knowing how much danger they’re all in, and this is one of those episodes where we see very little of the light, cheery Doctor that he can be sometimes.
Speaking of the cast, this is an interesting episode, similar to last week’s ‘Hide‘ in that there are very few characters. The Doctor, Clara, the TARDIS herself, and the Van Baalen Bros, who add an interesting element to the story. Gregor, as played by Ashley Walters, is an unrepentantly-awful character, and the audience can feel no sympathy for him, watching him hurt the TARDIS and generally act a jerk. Bram, played by Mark Oliver, is fairly similar, although says the least of the three. Tricky, played by Jahvel Hall, is the exception, being a more moral character than the others, and actively being aware of the TARDIS’ pain and subsequent anger towards those who have come aboard.

As for the villains of the episode, unfortunately, I can’t say very much about them at all without spoiling things. Suffice it to say, they’re extremely creepy, some very well-done camera work is used to keep them relatively in-the-shadows, making them all the more unnerving, and there is quite a big plot point revolving around them. They’re very well done.

So all in all, ‘Journey to the Centre of the TARDIS‘ gets a massive thumbs-up from me. It’s everything I wanted out of a TARDIS episode: massive amounts of wibbly-wobbly-timey-wimeyness, tons of throwbacks and little references to the past, and a scary aesthetic. There are a couple of little points that develop the two main ongoing plotlines of Series 7, but for spoiler’s sake, I’ll simply say that you’ll know them when you see them.
Marvellous episode throughout, fantastically well-done. I give it 10/10, and will no doubt be watching it again as soon as I’m done this review.

So come back next week, when we take a trip to Mrs Gillyflower’s Sweetville mill to deal with ‘The Crimson Horror‘…