I had a conversation with a Japanese friend of mine last week about his recent trip to Taiwan. I asked the usual questions, how was the food, how was the weather etc., but have to admit that his answer when asked about the people caught me slightly off guard. Taiwanese people, he said, had a particularly good relationship with Japanese people. I’ve got no trouble believing that the Taiwanese are a friendly bunch, so his emphasis on ‘with Japanese people’ surprised me. It’s worth pointing out at this stage that my knowledge of Asian history is pitiful and while I’m aware there are certain colonial connections between Taiwan and Japan, I’m not even nearly as aware as I should be as to what those connections are.

When pressed, he explained that although he wasn’t entirely sure about the reason for this kinship, he suspected it came from a mutual dislike for the Chinese. Japanese people love to say negative things about the Chinese, but rarely (including this instance) are they actually what anyone would call racist. Xenophobic, maybe, but rarely with any malicious intent. His reticent admission, and his reasoning, was not going to get any judgment from me. Sharing a mutual, subtle, dislike for your biggest neighbor, among your smaller ones, aware that it’s got no place in the modern world, is something Irish people know all too well. And Scottish. And Welsh. Japan is a weird place to exist in if you’ve already previously existed in somewhere that could be considered cosmopolitan. Don’t get me wrong, Tokyo has absolutely nailed consumerist cosmopolitanism, more so than just about anywhere on earth, but from a social perspective, things are a little murkier. In Dublin, it’s nearly impossible to know at face value if someone is foreign or not. So much so that the word has almost lost its meaning, used only by the ignorant and angry to decry a society increasingly of the opinion that you’re Irish by default if you live in Ireland.

In Japan, foreign people stick out like big loud sore thumbs. It’s a bizarre phenomenum, I see Americans and Brazilians and people from all nations clearly not Japan all over the place here, and yet I’m always surprised by it. Not so much by their presence, but by how noticeable they are. When you hear a South American voice speaking Japanese, they speak it with the emotion and musicality of their own language, when Americans do it, they keep their creamy American drawl. It’s almost as if they’re unable, or unwilling, to assimilate fully. Whether by choice or circumstance, they’re clinging to the most tangible, noticeable aspect of their culture that they can find. I’m starting to think we all are.

Much to my surprise, many Japanese people I’ve met just don’t know anything about Ireland. I’m hesitant to get judgmental about it as the north-south divide, the close proximity to the U.K and the fact that we speak English all point reasonably to us slotting somewhere into that ‘England-Scotland-wait, there’s more?’ dichotomy. That said, I may not know exactly how Taiwan came to be, but I can certainly point to it on a map, and am aware of its existence as a sovereign nation. Sometimes it’s difficult to feel like your culture matters when everyone around you is blind to it. 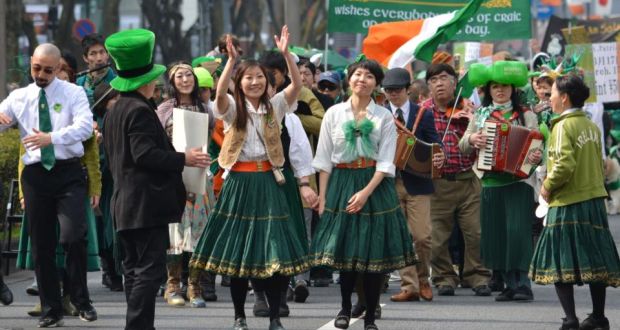 And then there’re days like St. Patrick’s Day, which hammers home not only how far-reaching Irish culture has gone on to be, but also the inherent, undeniable importance of knowing your own culture, wherever that may be. You are more than the sum of your parts, but those parts are individually important. Where you’re from is more than just a mark on a passport, it’s your values. Your beliefs. Your perception of what’s normal or not normal, rude or polite, delicious or vomit-inducing, your speaking volume, your style, your opinions all come from the roots that you sprung from; the soil that you rose from, and while, of course, these things can, and are in fact destined to, change over time, they make you the person you are, and inform your reactions to that change. It takes a village to raise a child, but it takes a nation to raise a person.

Japan’s St. Patrick’s Day celebrations are humble for the most part, the biggest event being the annual ‘I Love Ireland’ festival held in Harajuku’s Yoyogi Park. It’s a small affair, mostly brought to life by the fact that every Irish (and British) pub in Tokyo sets up a stall to sling Baileys and Kilkenny at the world and its mother. Afterwards, many go home, but most visit one of those pubs to keep the party going. Even in a nation thousands of miles away, culture prevails. People come together to share a love, a respect, an adoration for cultures not their own. That’s why I’m here, in Japan. That’s why they were there, in the pub.