Most of you guys probably don’t remember this game, but I spent months non-stop playing it until I completed every track and unlocked every character. It was originally released on the PS1 and, although I generally hate car games, Speed Freaks is an exception.

This game was released way back in the nineties and wasn’t a success, to say the least. There were roughly 14 or so characters to start with and each character had their own personality. There’s a hippie, a race boy, a dog, a scientist, a punk and a spoiled little brat. All these guys hung out in a tree house (which is where everyone wants to be during their childhood). The track in the game was very clunky and the driving was even worse but, nevertheless, I got completely addicted. This game really does have nothing on other racing games and, as I said, it is atrocious. But there is just something about certain games that stick with you – even if they’re technically bad, they find you at the right time and you’re stuck for life. 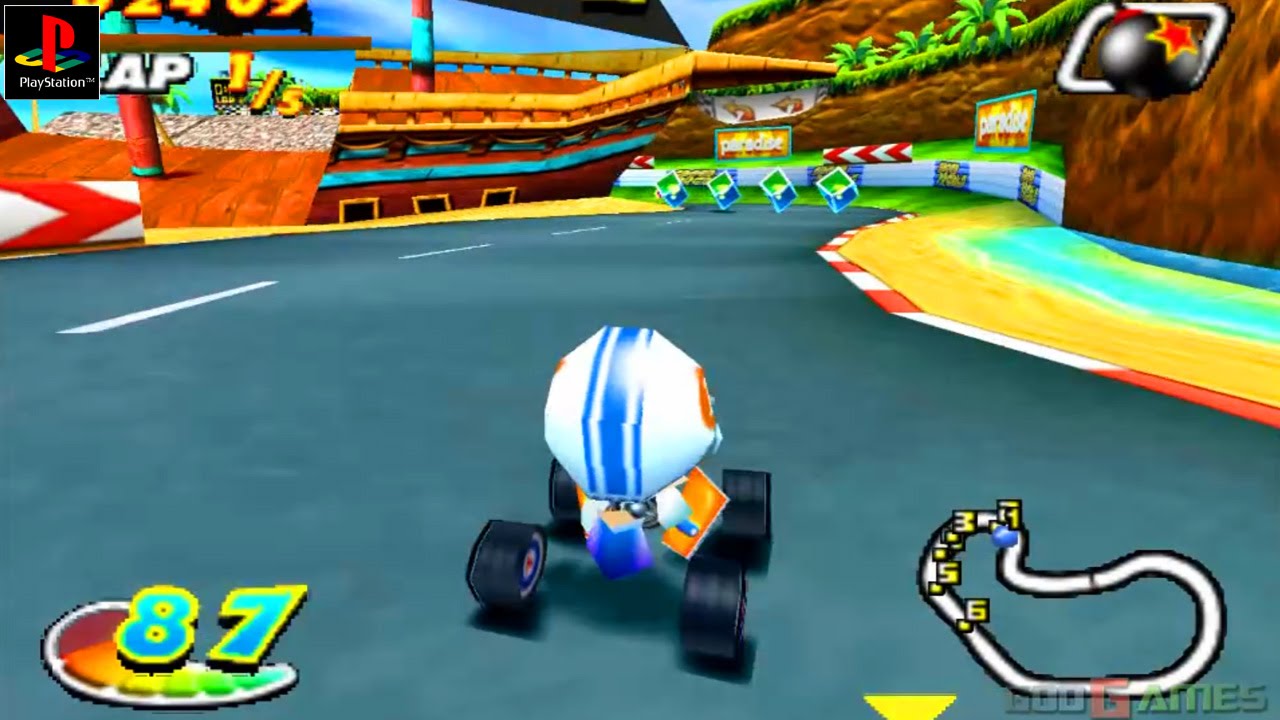 In fairness, the game was incredibly action packed and, just like most animated driving games, you had an array of weapons to use such as missiles, slime, speed boost and many others. Each player had their own stats, such as faster speed or better car control and so on. There were also secret areas in the track that you could take to free yourself up a lot of time and get that prized first place trophy. The offline mode has three different types of races tournament; single race and time attack. The tournament is pretty self explanatory, as it is a series of races in which you have to rank first to win. Single race is just a one off race that has no consequences when you finish last. Finally, you have time-attack. If you beat the recommended time in time-attack then you can gain yourself extra tracks or characters. There is also the online mode which offers you twelve more tracks to play with your friends. This is where the game became a lot of fun as it was really funny getting used to it.

As bad as this game is, it is also really amazing. I mean, I always come back to it and I obviously laugh my head off playing it. This is definitely a game for any nostalgic fans. This was the original Mario Kart so definitely check it out. Also keep an eye out for the bubble bee character, as he is the fastest in the game. If you beat him then you gain him on your team and it is well worth the pain and annoyance it takes to get him. The tracks aren’t too hard to complete as most are just plain circled tracks with very little curves or bends. This is a game that definitely needs an overhaul and to be re-released. I, for one ,would definitely buy the game again, or a sequel, which would be even sweeter.

Most games these days, especially in terms of racing, are all about the graphics and speed and design of cars, which is great, but this is a title where you can just pop in and play until your heart’s content and you don’t have to take it too seriously. It is very hard to find games like this today. I would say the closest game to this these days is Mario Kart 8, So obviously you can tell it’s good. This game focused more on the interaction of the characters than anything else. They have the most hilarious taunts and constantly just slag each other off which, for me, is one of the best things ever and, to top it all off, they made the voices ridiculously animated and childish. I simply can’t explain everything I love about this game. Make sure you go and download it to give it a try. You will hate it at first but it turns into one of the most fun racers ever, especially if you enjoy your classic game nostalgia.

Have you guys every played this game? If you have, what are your memories of the game? As always let us know in the comments below!

0
0   0
previous Interview: Collin Heier, US Pokémon Champion
next Pokkén Tournament Coming To Wii U In Spring 2016