Avatar: The Legend of Korra Recap

Avatar: The Legend of Korra Recap

With the second season of Korra, entitled Book 2: Spirits, rapidly approaching us, Avatar fans across the world are no doubt eagerly waiting to see what plot threads are going to continue, what new villains will be introduced, and what new settings will turn up for the New Team Avatar to explore. With all of that in mind, this article is going to take a look back at what’s come already! So let’s have a look back at what Book 1: Air brought to the Avatar table!

Right away in Book 1, we were introduced to our brand-new Avatar and main protagonist, Korra, and just as quickly, Korra made her personality come across with gusto. She was immediately headstrong and rather arrogant, very confident in her abilities and in herself, and only adapting to the whole “learning” process of being the Avatar with great reluctance. In other words: awesome. Right off the bat, people fell in love with Korra, coming off as so different to Aang, but a great character in her own right. We were also introduced to our brand-new setting, Republic City, a gorgeous sprawling metropolis with a really interesting 1920’s aesthetic that meshed so uniquely well with the bending-influenced technology of the time period. Lightning benders, now commonplace, provide the city its power. There are old-fashioned automobiles everywhere. Metalbenders, taught by Toph herself, are the police force of Republic City. It’s hugely interesting, showing off just how much has advanced since the days of A:TLA.

Aside from all of that, we met several other members of the cast. Korra’s animal companion, the gigantic and incredibly-strong polar bear dog, Naga. The austere and serious Tenzin, Aang’s son and Korra’s mentor, as well as his family, and their home on Air Temple Island. We meet Lin Beifong, Toph’s daughter, chief of the Republic City police, and general contender for most badass character in anything ever. Finally, the episode ends on a rather mysterious, even ominous note, giving us our first look at the series’ main villain… 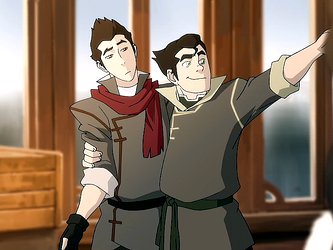 As the series moves into its next couple of episodes, the remaining key elements of both the show and cast are introduced. Most importantly, we were introduced to the pro-bending duo of brothers, Mako and Bolin of the Fire Ferrets, who swiftly form the New Team Avatar with Korra. Bolin is ostensibly similar enough to Sokka, providing much of the comic relief of the series while still being a talented fighter and valuable member of the team (as well as bringing his adorable fire ferret, Pabu, to the mix). Mako is significantly more serious and focused, often coming off as brash and headstrong, not too dissimilar to Korra herself. There were rapid sparks between the two, but that’ll have to wait until later! Also introduced, of course, was pro-bending, a concept which stands out to me and many others as one of the coolest parts of the whole series, a marvellous spectacle that serves as a really interesting development of the bending techniques that we’ve seen used so often.

We were also introduced to our main villains in full: The Equalists, an anti-bending faction ostensibly dedicated to toppling the bending ruling class, led by the charismatic Amon, a mysterious figure in a mask with an apparent tragic past, and the ability to apparently remove the bending of others permanently, something which he demonstrates on several minor characters. He’s an incredibly intimidating villain, and comes off as legitimately scary. What makes Amon such a fascinating villain is that, on the face of it, he seemed to have a strong point. He wasn’t a one-dimensional monster, he seemed to have genuine points in his favour (well…until later, anyway. But we’ll get to that).

The series’ plot continued to move on as rapidly as it started. We were eventually introduced to Asami Sato, the incredibly-classy and wealthy fourth member of New Team Avatar, who manages to impress even Korra with her combat and driving skills. She developed a relationship with Mako quite quickly, which causes a little strife in the team, a love triangle involving Korra forming quite quickly. Aside from the characters, the plot moves on to all-out war between the Equalists and Republic City, as Amon steps up his plans. We’re introduced to a flashback sub-plot, showing us the Gaang dealing with a rogue bloodbender, Yakone, and finishing him off. These revelations come into the show around the same time as the corrupt waterbending governor Tarrlok is introduced, who starts off shady and quickly develops into full-on villainy, kidnapping Korra (and then having his bending taken away by Amon…a little bit of an ongoing thing). 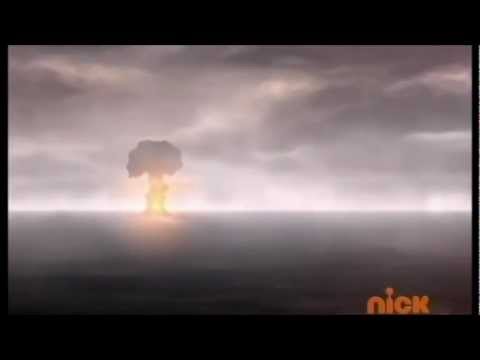 Eventually, of course, things come to a head in Korra’s epic finale. We see some fantastic Equalist technology deployed, with mechs all over the place and battles in the sky. We see the Fire Nation fleet arrive, with the new General Iroh making his entrance into the series in grand style. We see the fantastic reveal about Amon, showing us that he is, in fact, Tarrlok’s brother and Yakone’s son, and a powerful bloodbender in his own right. We finally see Korra utilise her airbending to defeat him in a truly excellent scene, having had the rest of her bending ability taken away. We see the now-infamous final scene of Tarrlok and Amon (’nuff said). And finally, in a spectacular ending to the first series, we see Korra master the Avatar State for the first time, and return the bending of those who had had it removed.

A series that did more in 12 episodes than many series manage in their entire run, The Legend of Korra was rightfully regarded as one of the best series that Nickelodeon have ever produced, and indeed, one of the greatest cartoon series of all time. It was packed with awesome moments, funny moments, scary moments, sad moments, and some of the finest character development possible. I think I speak for everyone when I say that I could not be looking forward to its return more. It’s been a hell of a wait, but I have no doubt it’ll be as good as ever.