This was an eclectic week for issue ones – we had a sea-beast, a space-chicken, and a motley fantasy crew. I can’t bring myself to sift though the reboots and rebirths and re-re-returns and all of the mirror-house continuity of mainstream comics, so I went indie again. It was worth it (again!) When I looked at the cover of Aegisteel I got a little excited. It had Invincible style artwork and a massive brown beast bearing down on a knight in chunky armour who was holding an even chunkier sword. On top of all that, it was a number #0. I love number zeroes because usually they’re designed for people to jump into. What I thought I’d get from writer Matt Nastos and Penciller Alan Gallo was a Dungeons and Dragons style adventure. I was looking forward to some swords and sorcery and goblins and spells and all that jazz.

When the gods want to punish us, they grant us our desires.

Aegisteel is sort of like jumping into the sixth session of a Dungeons and Dragons game. Everyone has distinctive but archetypal personalities and the main characters are all badasses. They speak in a strange ‘fantasy’ English that takes some getting used to, and often the characters deploy it to describe something happening off (sometimes on) panel. I don’t know if you, dear reader, have had the pleasure of playing dungeons and dragons, but diving in like that is a quite intimidating.

Not that Aegisteel is intimidating, it just feels like it’s full of a ton of unfunny in-jokes and lore that I
haven’t spent the time learning. I mean, I couldn’t handle when Game of Thrones went into season two
and introduced a bunch of different characters and places – I just stopped watching. Who the hell is Stannis anyway?

The art is nice if a little plain but I like the colour palette. I love playing Dn’D and the main character looks like the guy from Berserk and I’m all about that but I just couldn’t get into this. Maybe I didn’t want my swashes buckled as much as I thought I did.

I wont be reading any more of it, but you should if you fancy joining a raiding party. Judging Broken Moon by its cover, I expected something a little like The Hunt, one of the last comics I read. Coming from writer Philip Kim and artist Nat Jones, with all its sickly green and black tentacles, Broken Moon looked like Cthulhu may have been ready to come a-knockin’.

The art is well-suited to the story and tone. It’s mostly in hues of navy and blue and grey. There’s plenty of unsurprising black and a nice amount of orange, yellow and white. Overall, the use of colour in Broken Moon really drew me in and built a world. On top of all that, the pencil style is sketchy and messy. You can see objects are just a tangle of dark lines. I haven’t seen a comic re-enforce its content through the art style in a little while now. It’s neat and it really worked for me.

The story opens with a salty, cold, ‘Deadliest catch in hell’ vibe, with a few mishaps thrown in to make sure you know this world does not like it’s characters. Oh, also, there’s a Kraken. There’s a Bona Fide Kraken. You don’t see those in every story. Nor do you see post-humans and werewolves and heavy-handed social-commentary and world-building. Broken Moon has all of the above. It’s a bit like wetter Mad Max with fairytale creatures and the aforementioned Kraken.

The dialogue did get to me a little. I understand that the writer has a lot of work to do to introduce a post-apocalyptic world with shape-shifters and massive aqua-beasts, but a few lines just read as heavy-handed exposition.

This comic has promise, but it’s not for me. 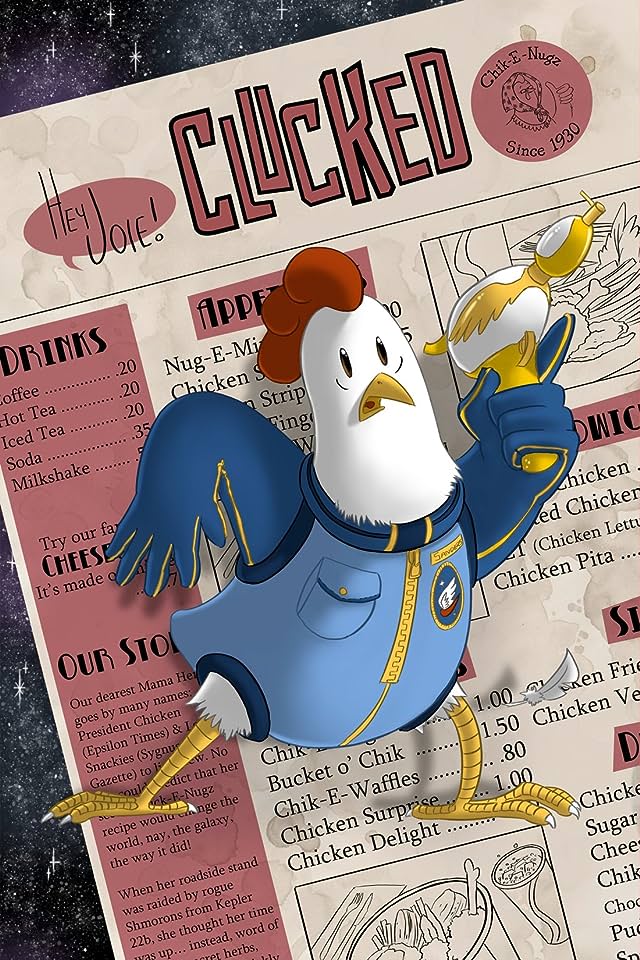 This had me from the first three panels. A space-chicken called Sanders lands on earth. Weird and charming, anyone? The chicken is called Sanders, sentient, and has a robotic assistant stuck to his front. Also, there’s another race of humanoid people on earth that are grey/blue/green-skinned freaks who crave chicken, which are now extinct. This is the kind of read that made me jealous I didn’t think of it. Damn you, Joel Foster, for your fine writing.

The story is a load of fun and the art from Foster is bright and cartoony without looking like it’s for kids. Of the three, this artist has the best eye for sequence and angle.

Anyway, Sanders the chicken makes friends with a vegetarian and from there, everything tips along. The dialogue veers into over-cleverness every so often, which is a pity, but not a deal breaker. We see video game logic references, and characters remarking on the irony of the writer’s choices. That stuff sticks out pretty hard when the rest of it is unpretentious and fun. These writing foibles don’t detract enough to put me off. Clucked is light and cheery and has a great premise.

If this was a trade paperback, I’d have it bought in a second.

What are you reading this week? Let us know in the comments!