Being such a big fan of the anime,  I was definitely excited to jump into this game. The anime is populated with so many great characters, balancing fantastic designs with endearing personalities. This is something that Long Song really taps into, having nearly all of these characters available as playable characters, that gradually join you as allies as you progress further into the game.

Jumping into the world for the first time however, felt more like falling into a wormhole that led right back to the 90s. Strolling through the town for the first time, you can clearly see the repeated character models, and as you jump into the story, the abundance of cut scenes really distracts from the game’s flow. This is something that you’d maybe expect more from a Playstation One game, or one of the handheld consoles. Once you slowly emerse yourself in the world of ALfheim however and adjust to how basic things are, the experience does eventually improve. I do think this is a game that fans of the anime would appreciate more than a gamer experiencing the world for the first time.

As I said already, the game is set in the fantasy world of ALfheim Online, a game world frequented by many different classes of characters from the imps to the cat sith and all else in between. Fans of the series should also bare in mind that this game is not necessarily set in the same universe as the anime, but more so in an alternate timeline.

The basic premise of the game is for Kirito and co. to plough through all the various quests and levels that have appeared on the new floating continent of Svart ALfheim, where new rivalries are formed with the addition of a few new characters to the series. You have the option of using three characters at a time, picking one main character which you control, and two support characters. The support characters usually come in very useful when you die mid-combat, as they can often revive you. So you’re never out of the action for too long.

Lost Song also has a ridiculous amount of cut scenes, which after a while get really annoying. A better balance could have been achieved between game play and cut scenes, but the option to skip them was used a lot more often as the game progressed. Another aspect that may deter some gamers is the fact that the game has been subbed as opposed to dubbed. So all of the voice acting is still in the original Japanese, while the text is all in English. This really didn’t bother me, but I know it can be off putting to some people. One of my favourite aspects of the game is the flight capabilities. In the early game, players are held back by silly heigh limitations, but as the game progresses, these limits are stretched. It’s exhilarating soaring through the skies, and gliding into fights.

Combat, magic and weapons are also a lot of fun in this game. Once you get the hang of the controls, and once you get used to the fact that you can only make upgrades and change weapons in the town (such a silly limitation) , the action and fights actually make for an enjoyable experience. Each player has their own unique styles, with characters like Kirito preferring swords, Sinon being more comfortable in long range bow and arrow fighting, and Asuna who favours magic. This offers players a diverse range of experiences as they progress through the game with a team of their favourite characters.

However, the NPCs in the game do not enjoy the dame luxury of diversity. As you make your way through the game, you can’t help but notice the repeated use of character models, with slight variations in colour pallets to denote their differences. Once again giving more of a PS 1 feel as opposed to a Ps4 game, that really does not use the console to its full capabilities. 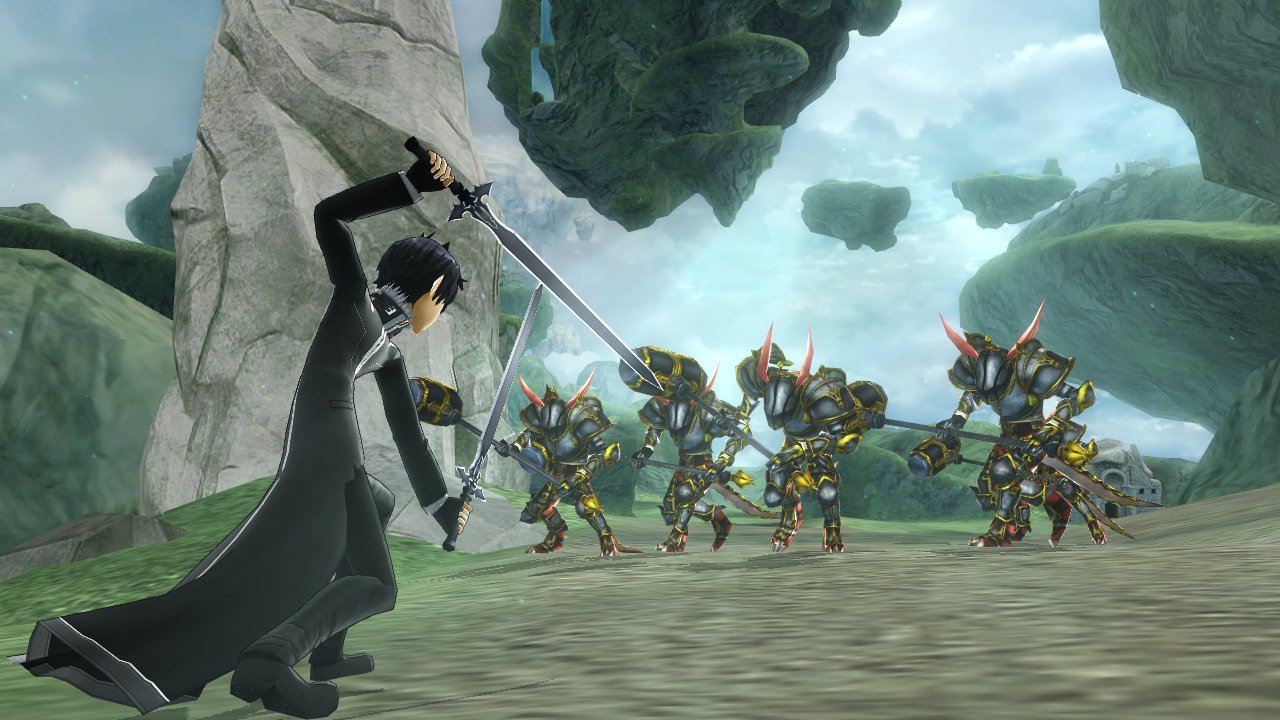 Overall, Sword Art Online: Lost Song offers a fresh new adventure in a world that fans of the series will enjoy exploring. However, it’s 2015, and games with silly limitations can often be annoying, especially when there are so many open world, sandbox games available that really allow gamers to emerse themselves in the game. There is incredible potential for a game world like ALfheim Online, and I just don’t feel like they hit the mark this time around. Fans will enjoy it, casual gamers will be lost.

Sword Art Online: Lost Song is a game fans of The series will thoroughly enjoy.