Yesflix/NoFlix: 3rd Rock From The Sun Vs. Portlandia

Yesflix/NoFlix: 3rd Rock From The Sun Vs. Portlandia

This week on Yesflix/NoFlix, we have two titles seeking to tickle your funny bone. The correlation between the two being that both are comedies, both of them feature an alumnus of Saturday Night Live as part of their main cast and both I watched recently and couldn’t think of a more cohesive theme for this particular edition. Oh well! Laughter was had. Comedy comes in different varieties and is subjective to each persons humor. One neighbour’s professed love of trash television is another neighbors annoyance that they didn’t insulate their walls to be sound proof. Convincing a person to change their comedy preference is an idiot’s task given that we formulate our perceptions of what is funny from unique experiences in our development.

Hello, I am an idiot.

Here is a rundown of two popular and beloved shows that I have judged based on my own comedic preferences to be either good or bad. Their styles are different, but their resounding positive reception critically makes them an interesting pair to look at side by side.

YESFLIX – 3RD ROCK FROM THE SUN 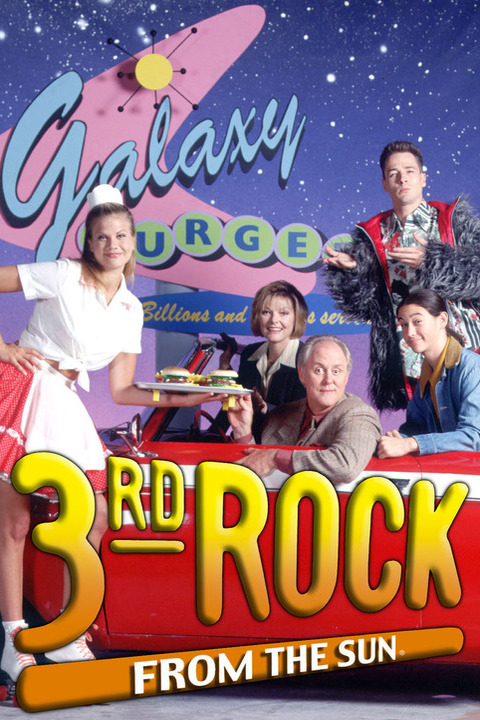 3rd Rock from the Sun is a comedy in the vein of Mork and Mindy with the added bonus of intelligent social commentary. It follows the exploits of a band of aliens quizzically examining the earth from the point of view of scholars. They take the form of humans in order to infiltrate the masses and get a better hands on approach to discovering the customs of the inhabitants of our humble blue planet. The cast features talent the likes of Jane Curtin of SNL fame, a young baby-faced Joseph Gordon-Levitt and John Lithgow. Upon hearing this premise, you can predictably assume the main focus of 3rd Rock from the Sun would be a slew of awkward interactions between our lead bumbling extraterrestrials and earths inhabitants due to their lack of understanding at the intricacies of humanity. Partial credit will be given for thinking that. The core concept is built to appear as if a bunch of visiting morons from another planet have come over just to take a gander and perhaps gain wisdom for their home species. The ironic twist of the show is that the aliens are highly advanced in comparison to us and the only limitations that are cast upon them are because of their new human skin that they have donned. This is a clever spin on a perceived notion we all have of being the dominant species.

Where 3rd Rock really thrives is in its emotional elements and in the strength of its writing. The chemistry of all members of the main cast lends a sense of family and likability as we get to know each character individually as a research team, only to see them embrace the emotions associated with humanity and become very protective over one another. Gender identity is a commonly explored theme throughout the series as the aliens experience what it is like to be separated into “human categories”. The idea of what a woman and a man should be, is satirically poked at in a genuinely thought-provoking way. This is particularly noteworthy given that the show came out in 1996. The ‘90s wasn’t exactly known for this type of progressive talk, especially in a comedy series. Interesting discussion like this, marinated with genuinely heartwarming moments and a sense of wit that was light years before its time, makes 3rd Rock from the Sun a real out of this world experience. If you like your quirky comedy sharp and a little goofy. Give it a watch!

FANS OF THE MIGHTY BOOSH AND THAT ‘70s SHOW WILL LOVE THIS!

SNL affiliate Fred Armisen takes his goofy brand of sketch based humor to Portland, Oregon! Yep, that’s about it for the premise. Fred is a sketch comedian through and through displayed in lukewarm fashion in this skit based show alongside his fellow co-star Carrie Brownstein. A large amount of the humor seems to stem from inside knowledge about the residents of the state of Portland. Normally, this kind of niche concept would appeal to be, but it has the double barrel hindrance of being entirely sketch based (a format that I’m generally not into for a series) and being very try hard in its quest to be lovably quirky. It’s kind of like Zooey Deschanel the show. If there wasn’t already one of those. The presentation of Portlandia eludes that it is a highly alternative type of show that is breaking some sort of ground.

Unfortunately, from my perspective it’s just another surrogate SNL with more misses than hits. Given that I do hold a bias against sketch shows, It is understandable that this would not be for me. However, In light of my dislike, There was certain moments of humor found. When Armisen tackles longer sequences that stretch beyond the quick in-and-out glances of certain characters, There is real layers of intrigue and depth to these seemingly inconsequential people that he is portraying. While this may seem a grand praise for a show that I have put in my “no” category, it is actually a detriment as well. Fred and Carrie are both talented comedians, who would lend themselves better to a sitcom premise as opposed to these glimpses of what might be. Monty Python is a classic example of what shows like this are aiming for. The trouble with Portlandia is that in its own premise it lets itself down by not being fast paced with its jokes. For this type of humor to work, you need to either have a very quick paced sketch that has a joke a minute and gets out while the laughter is still present, or a well formulated build up to one single joke that is intended to garner the biggest laugh. Portlandia doesn’t work within these confines and while I do admire that, I also have to question why I should remain invested in a show without a basic structure and genuine progression. If I actually wanted to watch that type of show, I would watch Monty Python’s Flying Circus. It’s the benchmark of every sketch show.

To watch Monty Python’s Flying Circus over the years is to see the development of genius changing over time. It was weird, but it had equal measures of cynicism and slapstick to balance it all out. There  were misses, but they were often eclipsed by the stronger aspects of the series. To watch Portlandia is to witness too many ideas being thrown at the wall and hoping that all of them will stick. Believe me. The ones that do stick can be very intelligent in some regards, but there is little room to find these when the wall is mostly covered with chunks of half-baked scenes where the joke is just “Isn’t this weird?”. This is a humor that gets old very quickly from my experience.

In my opinion, The chemistry just isn’t right here. It’s a mish-mash of ideas that are intended to be outlandishly random, but come across largely forced. The best description I can give is that it feels like Fred has integrated every idea that was placed on the cutting room floor of SNL and then re-purposed them to be set Portland . Sure, I did laugh at Fred and Carrie as a pair of negligent bookstore owners, but if there is really no flesh beyond that, then there is little to come back to each week.  Portlandia is not for me. A lot of the characters don’t hold a lot of likability in my view and the jokes are subtle to the point of forgetting to be a joke entirely. It is pretty harmless. This does sadden me to say as both Fred and Carrie have a nice rhythm together. They seem to be having fun and there is glimpses of brilliance within the both of them.

Bottom line, I’m not the audience for this one, but I would be interested in seeing what both comedians will be doing in the future. This hits the territory of being too wacky for its own good and not being as clever as it believes itself to be. It’s distinctly… just okay.

FANS OF MONTY PYTHON’S FLYING CIRCUS AND THAT MITCHELL AND WEBB LOOK WILL HATE THIS!

Do you agree? Are you a fan of either of these shows? Or both? Tell us in the comments!