It seems like every time I have to review an Assassins Creed game it gets more difficult to know where to begin. Each iteration brings with it more bells and whistles each of which come with demands for space in every critic’s word count. It’s pretty spectacular to look at how far this franchise has come since its first entry in 2007; who’d have guessed that its beginnings as a divisive, technically impressive but crushingly linear free-running sim masked ambitions of open world exploration, seemingly infinite gameplay mechanics, incredible moments of historical tourism and a genuinely fantastic conspiracy-themed plot to drive us from one game to the next. Not to mention the brilliant multiplayer angle introduced in Brotherhood and the dedicated (at times to its detriment) stream of cross media material, spanning comic books, novels, browser based games and several film projects, all of which are actually pretty good. Assassins Creed has become somewhat of a powerhouse franchise.

Considering how much stuff Ubisoft have crammed into each consecutive game, – town building in II, recruiting assassins in Brotherhood, the hookblade in Revelations, tree hopping in III etc. – it came as quite a surprise to find that the latest installment, Black Flag, would be releasing on next gen and current gen platforms. There couldn’t possibly be room in the proverbial suitcase of my console for more stuff. Surely Ubisoft had more sense than to risk straining those seams further after the slack they took for ACIII‘s many bugs and glitches and yet, here I am; reviewing a PS3 copy of Assassins Creed IV: Black Flag (and admittedly, one that was very late to arrive) and once again, I really don’t know where to begin.

Our leading man this time around is Edward Kenway, grandfather of Connor Kenway from ACIII. When we first meet him he is a free spirited pirate with aspirations beyond his ability and a taste for a life he has never known and while it may sound like a tautology, Edward Kenway is undeniably the star of the show. He is instantly charismatic and likable and as you’re thrown headfirst into a plot that has already hit the ground running, you can practically see developers at Ubisoft holding their hands up in atonement for ACIII‘s three-hour red herring prologue. That immediacy sets the tone for a story that races along like it’s trying to reach a deadline and in a very real way, it actually is.

The present day segments of the AC games have always been one of their stranger aspects. Initially baffling and gradually becoming the more interesting and important story threads, III’s somewhat anti-climactic ending left a huge question mark over where it could go from there. Black Flag‘s present day sequences do not – surprise, surprise – feature long-standing protagonist, Desmond Miles, and instead places you in the role – in first person perspective, no less – of an employee at Abstergo Entertainment; a video game company currently developing a pirate game based on the life of Edward Kenway. Your job is to play through his memories, procured from the DNA of Desmond Miles, to find the really exciting stuff. Not that you’ll have to worry about that though; this is still Abstergo and there are still conspiracies afoot.

These sequences very rarely interrupt the swashbuckling, I counted three obligatory present day story sequences, but you do have the option to exit your animus and wander around the studio any time you like. There are computers to hack and mysterious, fantastically creepy notes to be tracked down, all pointing towards something much bigger than a humble video game, all of which become available at different points, encouraging you to explore the studio in depth, but at your own pace. These sequences are oppressive in a Stepford Wives kind of way and really succeed in reinforcing Abstergo as an impossibly concealed monstrosity. There are also a lot of developer in-jokes; email chains between staff members discussing potential sequels, cringe-worthy trailers and laughable marketing reports. It’s hard to tell how much of it to take seriously at times, but it’s all terrifically entertaining. 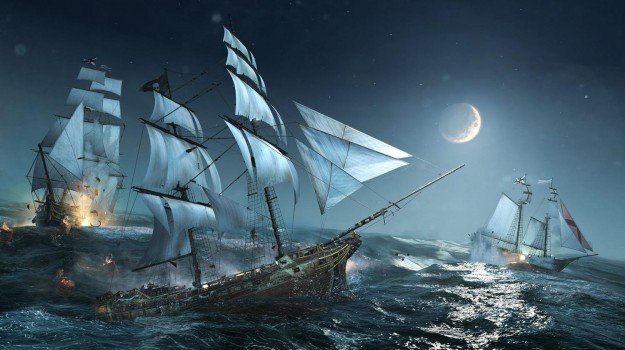 The additions to the gameplay smorgasbord this time around are probably two of the most substantial the series has seen up to now. Naval warfare from ACIII is expanded upon and Black Flag doesn’t just encourage you to battle other ships, your ship, the Jackdaw, is your primary mode of transport from one area to another and unfortunately there’s no way to adequately convey this without swearing, the world is fucking massive. Comically so. Ridiculously so. So massive that you could spend a full year sailing around taking forts, commandeering ships, raiding smugglers dens, tracking down aztec pillars among countless other distractions and still not hit that 100% completion mark. If it’s baffling to think about how Ubisoft crammed all this onto current gen hardware, it’s completely maddening to question just how seamless it all is.

Once you’ve set sail from any given area you’re free to travel the world. Between destinations you’ll come across randomly scattered islands which may or may not have treasure or other items of interest on them. You might also come across a handsome ship that you feel you’d like to destroy and in doing so secure materials to upgrade your own ship and bolster your crew. All of this is, somehow, completely seamless. When you’ve incapacitated a ship Edward can swing straight to their deck from his own and into the maw of hand to hand combat. If you’ve found an island you want to explore, order your crew to halt, hop into the sun-dappled ocean and swim to its shores. The oceans and horizons of Black Flag are a joy to behold and there’s a genuine sense of awe about the whole thing that makes even the longer sailing sequences relatively enjoyable.

That said, Black Flag does occasionally suffer from Wind Waker levels of nautical wankery. Synchronizing to viewpoints allows you to fast travel to those locations but occasionally the game will insist that you bite the bullet and sail to your destination like an honest sailor. The longer of these journeys can take up to 10 minutes, not counting whatever amount of time you might lose fighting off hostile ships and as beautiful as the caribbean vistas are, I found these sections rather tedious. They do however serve a pretty insidious but important purpose which leads me to an admission; something I never thought I’d say about an Assassins Creed game and yet, here I am. I’ll admit it.

Roughly a third of the way through a small warning appeared at a mission marker. ‘WARNING: You should upgrade the Jackdaw before starting this mission’, it said. ‘Bah!’, I said dismissively as I continued unfazed into, what would turn out to be, many quick and disheartening deaths. Eventually I decided to heed the original warning and upgrade my ship. Unfortunately, I didn’t have enough material for the necessary upgrades and so had no choice but to delay the main campaign to travel the land pitching fights with bigger ships to improve my own. Ladies and gentlemen, I had to grind. I had to grind in an Assassins Creed game and I’m still not the better of it. In retrospect this isn’t really that surprising though as Black Flag is the hardest game in the series so far. Thankfully it’s difficulties are usually balanced out rather brilliantly. Combat is more responsive but enemies are much smarter. Money is significantly harder to accumulate but is actually worth working for to keep yourself in ammunition and ship upgrades. Level design allows for plenty of stealth exploration but areas are densely populated with, admittedly dim, guards all itchy to stick a bullet in you. Black Flag is quite challenging, but it’s rewarding all the same.

The multiplayer portion of Black Flag is as fun as it’s ever been but there’s not really much else to say about it. Very little has changed and what has is mostly cosmetic. Another area where Black Flag doesn’t quite hit home is its score. Brian Tyler, fresh off his work on Thor: The Dark World, delivers a functional score that makes good use of instrumentation to straddle the line between the electronic and the orchestral but never reaches the heights of Lorne Balfe’s epic, percussive main theme for III or Jesper Kyd’s haunting vocal melodies. The sea shanties your crew sing while sailing are enjoyable though and while you’ll probably never manage to collect them all, you’ll find yourself singing along to your favorites before the credits roll.

Edward Kenway is a man of ambition. He wants to live an easy life of luxury and will do just about anything to make that happen. Over the course of the game he’ll come to know of the Assassins and the Templars. He’ll learn of their endless battle and he will have to choose his role within it. His story is one of brilliant highs and deep sorrow; a free spirit, chasing the wonders of the world with one eye constantly on the land he left behind, where he silently hopes to return. Ubisoft are in a similar position now. For all that ACIV brings to the table, it’s greatest triumph is how it unites all the errant ideas that the franchise has been toying with since its inception. Combat works better than ever, the world feels more open and alive than ever before, stealth is finally a realistic option, the in game economy finally matters and the present day storyline feels like it’s going places again. The franchise has come full circle. Black Flag is the biggest, most ambitious and undeniably the best Assassins Creed game to date. Where on earth will they take us next?

[easyreview title=”The Arcade Verdict” cat1title=”Gameplay” cat1detail=”Everything the series has tried to do up to now is finally done properly, and a hell of a lot more for good measure” cat1rating=”10″ cat2title=”Plot” cat2detail=”Essentially reboots the present day storyline and delivers an powerful pirate epic at the same time” cat2rating=” 8″ cat3title=”Presentation” cat3detail=”A disappointing score fails to ruin an otherwise fantastically presented game” cat3rating=” 9″ overall=”true”]