Tokyo Game Show is a big event. Like, proper huge. Three massive event halls huge. Between all of them, there’s so much to see and do, so much to get blindsided and distracted by, it’s easy to lose hours just wandering around taking it all in. Last year, that’s exactly what I did. This year, however, I had a singular focus. One goal and one goal alone; after ten years of waiting, wondering, pining, sulking, fuming, festering, dreaming, hopelessly hoping against all hope, I was finally going to get my hands on Final Fantasy XV. Eyes locked on the enormous moogle and dragon-quest-slime hanging over the Square-Enix booth, I strode towards my destiny; weaving in and out of bloggers and journalists, determined to beat them to it, despite the fact they were clearly walking in the opposite direction, and as my time approached, a thought struck me.

What if it’s not good?

Final Fantasy XV is the stuff of legend at this stage. Between living in limbo for over a decade as Final Fantasy Versus XIII, finally being unveiled as Final Fantasy XV and recently being delayed yet again, Square should consider it a minor miracle that anyone still gives a flying phoenix down. As a die-hard Final Fantasy fan, I’ve watched this saga unfold very closely. With Shinji Hashimoto producing, the ship is in good hands. With Hajime Tabata directing, it’s very unlikely we’ll veer off course. With Yoko Shimomura composing, our journey will be rich with music and beauty. I was confident and assured and downright cocky about it; there was no way this was going to suck.

If what I played today is anything to go by, I was very, very, very right.

The first surprise came when the staff member on-hand asked if I would prefer to play in English. Instead of rebooting the system, he simply jumped into a menu where we could choose which language we wanted both the text and audio in. For fans like me, who prefer hearing moonspeak but can’t fully understand it, this is a revelation. The freedom to customize your Final Fantasy experience at this level is previously unheard of, and is something I’d imagine many fans will be very thankful for. 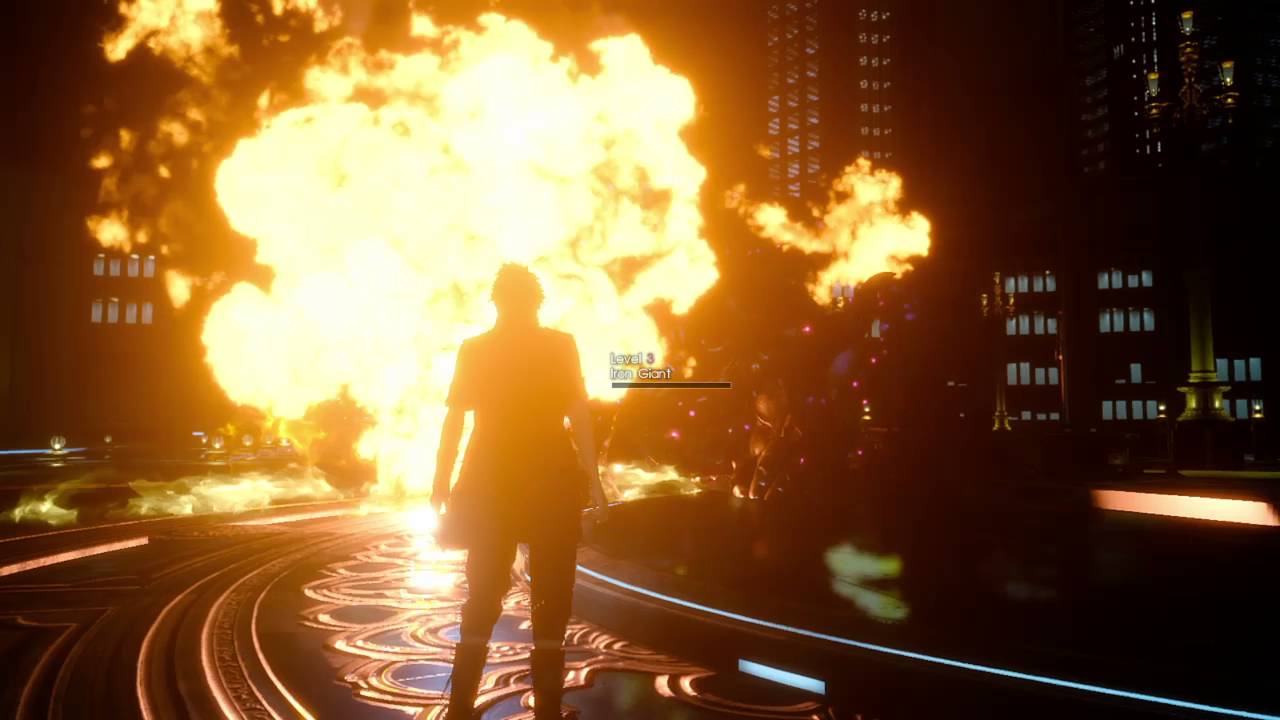 The demo begins in what looks like the bowels of hell. Our cast, in royal attire, are battling a ferocious fire-breathing freakshow, and it isn’t long before the screen fades to white and we skip ahead a little.

Noctis, our sexy hero, is leaving with his buddies for a road trip that, upon completion will see him wed to Lady Lunafreya, a marriage that will unite two warring nations. As it turned out, playing in English was no problem at all; the voice acting was superb. Each character is unique, instantly likable and frequently hilarious. Particularly Prompto, who I had (like many I would imagine), written off as a generic Whedon-esque quip-machine. The interaction between Noctis and his father was particularly enjoyable thanks to some subtle voice acting, some really nice writing, and probably the best facial animations I’ve ever seen in my life.

On that note, Final Fantasy XV looks positively astounding. Soon after Noctis and co. hit the road, their car breaks down and they (and by proxy, you) are forced to push it along a dusty deserted road. After a little while, just as I was starting to wonder what this sequence was really about, the game instructs you to take a look around. Spinning the camera reveals a lush backdrop of mountainous terrain, endless skyline and honestly more wonder than I could ever put in to words. Florence and the Machine‘s ‘Stand By Me’ fades in, the title card appears and suddenly it seems like everything is going to be okay.

The game kicks off proper at Cid’s auto-shop; yes, Cid is a mechanic in this world, and once you’ve been introduced to his daughter Cindy, you’re given your first mission and off into the badlands you go. On the surface, the missions are standard RPG fare; go here, kill the things, come back etc. but Final Fantasy XV shows its true winning quality as you progress through them. This is a game that has learned from its predecessors. Where XII‘s open world felt cavernous and intimidating, XV encourages you to explore within small, but bountiful, perimeters, while never explicitly stopping you from buggering off elsewhere if you want. The world feels alive and bristling with potential stories, but there’s an impetus to follow your course and explore at the games pace.

Oh and there are monsters too, of course.

Final Fantasy games don’t always live or die on their battle systems, but, as was the case with XIII, some of them certainly suffer serious fan-wrath if they don’t deliver. Final Fantasy has been toying with ditching turn-based party combat since as far back as XII, but has never quite managed to get the hang of it. While some, myself included, felt XIII‘s paradigm system was as good a blend of turn-based and real-time combat as we were ever going to get, it didn’t resonate with fans or newcomers in a meaningful way. For better or worse, Final Fantasy XV takes the plunge and ditches turn-based combat altogether. It’s a bold move, but one that makes perfect sense given the cultural landscape in which it exists, and thankfully, I’m happy to report this particular gamble pays off in spades. 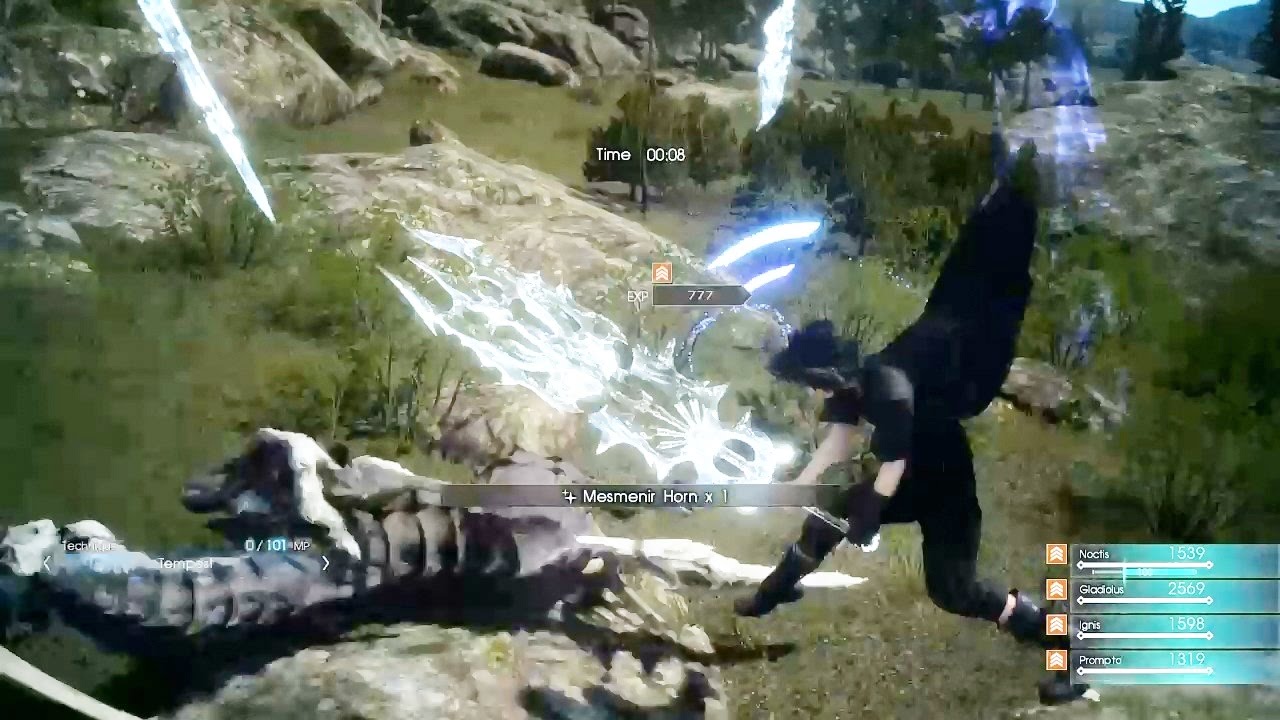 As Noctis, players can switch seamlessly between three weapons; a lumbering behemoth of a sword that deals heavy damage but swings like an alaskan salmon, a standard blade, and a spear to deliver rapid strikes. Alternating between the weapons is wonderfully fluid and an absolute joy to toy with. It reminded me of Ninja Theory’s DmC, that’s how smooth the combat is. Occasionally, enemies will stumble and become vulnerable, not dissimilar to FFXIII‘s stagger mechanic. Noctis can command one of his comrades to join him in a special attack, and as we’ve seen in many many trailers, he can also warp around the battle field, which turns out to be a pretty important strategic maneuver.

While hanging from designated spots, Noctis will recover quicker and can launch powerful warp-strikes to potentially end battles quickly. At first glance, it looks like by-numbers hack and slash fighting, but this is an RPG, and the level of strategy involved in balancing all your options, makes it undeniably a Final Fantasy game. I mentioned earlier that Final Fantasy XV has taken cues from its predecessors, which is in and of itself a grand Final Fantasy tradition. XV‘s ability and leveling up system, referred to as Ascension, seems to work a lot like the sphere-grid from X, and hidden around the map are elemental points where Noctis can absorb MP for specific spells, very reminiscent of VIII‘s draw system.

Despite any callbacks that may appear, Final Fantasy XV is very much its own beast. It feels new. It feels genuinely refreshing and fun to play. At campsites, you can rest, and heal up or train to get stronger. If you rest, Ignis will cook a meal of your choice, each of which will level up your party in different ways. Prompto will show off some photo’s he’s taken since the last campsite, and if you like what you see you can save them. These small touches might seem frivolous, and they are, but that frivolity is what’s been sorely missing from Final Fantasy for far too long now. Final Fantasy XV, unlike the XIII trilogy, isn’t afraid to laugh at itself, and it expects you to laugh too. That was my main take away from my 30 minutes with XV; this is a game designed to be enjoyed, not endured and I for one enjoyed all 30 minutes of it.