It’s finally here! After 13 long years, Finding Dory has hit theatres and now I’m going to tell you about it. Pixar has a mixed history with sequels; from the truly beautiful Toy Story sequels to the poor mess that was Cars 2, and the lukewarm Monsters University in between, this is a movie that could have gone any way.

From the beginning, though, this was a movie destined to be hyped, between such a long wait and the fact that Finding Nemo is Pixar’s second highest grossing movie, after Toy Story 3. Everyone was looking forward to this movie, no one more than Ellen DeGeneres herself. So does Finding Dory find its fins and swim leagues above the rest or does it sink into the depths of suck along with the Cars franchise?

Well, you need not worry my nautical neighbours as Finding Dory is a strong successor to its predecessor. It has the same feeling of warmth and love the original had with an all new story, and while it has a couple of flaws, it is still a splendid movie that is more than worthy of wearing the prestigious Pixar badge. So let’s break down what looks to be the highest grossing movie of 2016, Finding Dory. And fair warning, thar be SPOILERS ahead mateys!

Finding Dory opens with Dory as a very young child with her parents, played by Eugene Levy and Diane Keaton, trying to play hide and seek to some difficulty due to Dorys memory problems. After getting distracted, Dory almost gets sucked into an undertow current before being caught by her parents who then warn her of how dangerous it is. Cut to a scene of two random fish stumbling across Dory as she explains that she’s lost her parents and needs help. As the fish try to help her Dory wanders off and what follows is a truly heart breaking sequence where Dory travels the ocean asking various fish for help but every time forgetting more and more about her parents until eventually she’s grown up and doesn’t even know what she’s looking for anymore, which leads her to bumping into Marlin as he is chasing the boat that took Nemo in Finding Nemo. Now, Nemo is safe at home with Dory living right next to Nemo and Marlin. Out on a field trip with the stingray teacher, Mr. Ray, Dory encounters an undertow current and has a sudden flashback to her parents and thus begins her adventure to and throughout a marine research facility to find her parents, all the while remembering bits of information as she goes. So basically, this is Memento for kids. 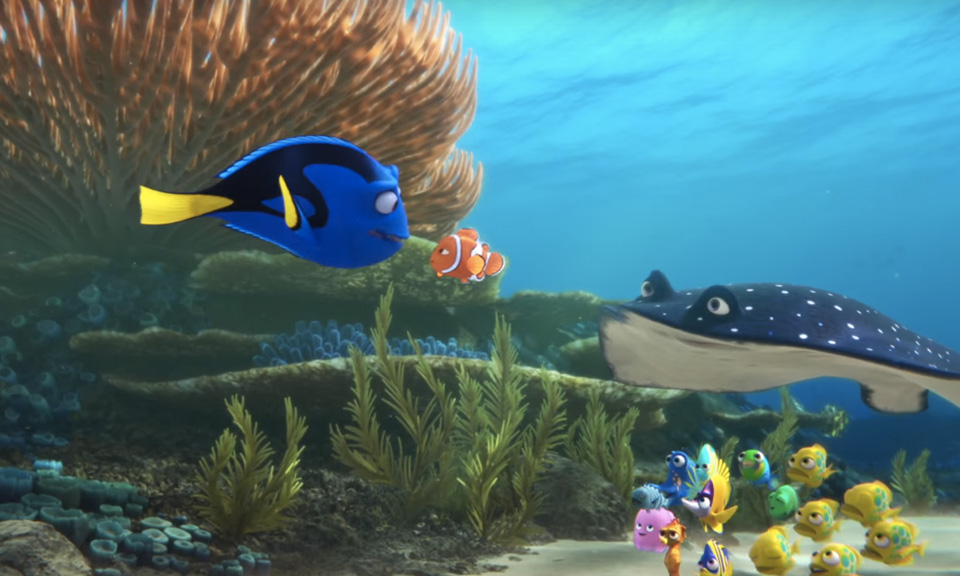 What I really liked is that most of the movie takes place around this marine research facility and is not just another trek across the open seas, again differing it from the previous movie. It provides a fresh new world to explore allowing for some fun new visual gags as well, like an incredibly intense touch pool scene that’s akin to the start of Saving Private Ryan. One of Finding Dory’s strong suits is in its new support characters with the cynical and brash octopus named Hank, voiced by Ed O’ Neil, the short sighted whale shark named Destiny, who used to be ‘pipe-pals’ with Dory, voiced by Caitlin Olson, and Bailey, the beluga whale who can’t use his sonar, voiced by Ty Burrell. Each are fun and a joy to watch as they all interact with Dory. And I don’t think I need to mention Ellen DeGenerese‘s performance as our leading lady. She’s every bit as loveable and adorable as she was previously, if not more so. All of her jokes hit home and she can even really pull off the heavier emotional moments. 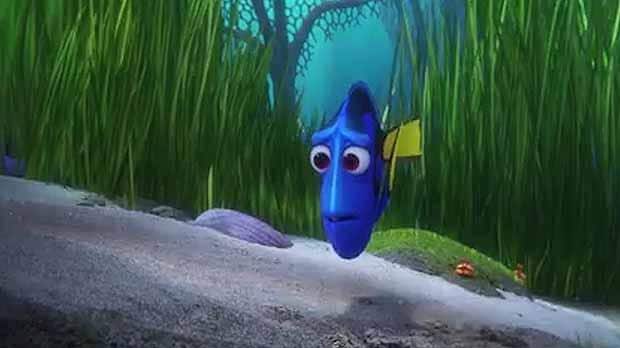 And this is a movie that gets heavy. There were tears shed on more than a few occasions across the runtime, though none hit harder than at the start. Like the beginning of the first movie, this one was pretty emotionally jarring. Unlike the visceral scene from the first movie, this one is more subtle. Think about it; this is a little girl slowly getting more and more lost as any memory of her family slowly slips away from her. That’s some heavy stuff for a kids movie! Luckily, it is balanced out with some good comedy. As mentioned above, the support characters are all fun; the Sigourney Weaver over the PA gag gave me a severe case of the giggles and the climactic ending scene had me in fits. I don’t want to ruin it if you haven’t seen it because it is a thing of beauty.

My biggest gripe with the movie though is with Nemo and Marlin. I felt like they were tacked on because they were the leads of the last movie and just about everything they do feels really separated from the main plot, to the point where they could have been left at home at the start of the movie when Dory leaves and not a whole lot would have changed. They spend most of the movie just following Dory. There was one moment at the start where there is some really forced conflict between Marlin and Dory that seriously irked me. Marlin gets irrationally angry at Dory for her memory loss. It felt a little out of character for Marlin, who spent a whole movie growing sympathetic towards Dory’s disability and when she tells him that she finally remembers her family, he snaps at her. I personally think it would have been a better movie had it just been Dory alone on her adventure meeting new characters. However, outside of that particular scene, they don’t hugely take away from the movie. They have some funny moments and it’s through them that we meet Fluke the seal, voiced by Idris Elba… So it’s all good.

All in al,l does Finding Dory live up to the hype? Yes I think it does. It’s another splendid adventure with Disney’s beloved blue tang. Not only is it a really heartfelt story, it also carries a message of ‘no matter how hard something might seem, if you try and believe hard enough you can overcome any obstacle’. So I implore you, if you haven’t already watched Finding Dory, please do.

So now that we’re on the topic of Pixar sequels, when are we getting The Incredibles 2?!