Home Featured Game Of Thrones S7E6 ‘Beyond The Wall’ Review

Game Of Thrones S7E6 ‘Beyond The Wall’ Review

Game Of Thrones S7E6 ‘Beyond The Wall’ Review

The Next Mighty Ducks Chapter Arriving In March

Heigh ho, heigh ho beyond the wall we go

Episode five ended with a ragtag band of our favourite heroes and hounds venturing beyond the wall. Their ultimate goal? To capture a White Walker! Which, to say the least, is a tall order.

I had a feeling this episode would be intense but I was in no way prepared for what was to come. White walkers (and the wights) are pretty terrifying on a good day, but facing so many of them with just a small number of people is even worse.

This episode primarily focused on the trip beyond the wall, which I was VERY happy about because the other part of the episode was about Arya and Sansa’s weird… thing. Which, honestly, is all pretty meh. This season has been pretty sparse on the White Walker front until now, so I was delighted to see more of them.

At first it didn’t seem like anything much would happen aside from a bit of banter and lots of walking, until a wight polar bear attacks the group. It honestly felt like it came out of nowhere and made me jump. So it was a nice way to set the tone for the rest of the journey because it wasn’t long until the crew – Jon, Jorah, Sandor, Gendry, The Wildlings, and The Brotherhood – got their chance at bagging a wight.

While trying to catch a white walker, however, we learned something new about these creatures; when one of the ‘knights’ gets killed by Jon, the wights that were with him disintegrated. They learn that in a fight against these icy undead, it would be best to go for the one that created all of them. So the Night King would be the best target for any future encounters. Easy, right? Right? Wrong.

For a while it looked like getting out safely wouldn’t be an option. The group had a minor respite following some fleeing across a frozen lake to reach a temporary safe haven, but Clegane just had to throw that damn rock didn’t he? If he’d gotten some long overdue anger management, maybe there would have been less casualties. Gendry, meanwhile, is running as fast as his legs can carry him back to Eastwatch to send ravens.

My heart was in my throat as they fought to stay alive and keep their captured ice zomble, since I can never be too sure that characters aren’t going to get killed off. I relaxed for a bit when Dany showed up – like the boss queen that she is – with all three of her babies in tow, but I was left wondering how much time had passed since Gendry left the others. His years spent rowing must have granted him the ability to teleport. Handy!

Normal ravens can fly on average at speeds of about 40 km/h. So even if we give them a Westeros boost, they might hit 70mph. The distance from Eastwatch to Dragonstone would be 2420 km/h, meaning a raven would take either 60 hrs or 34 hrs to deliver its message, so already that is more than a day. As for how fast the dragons can fly, I have no idea. Anyways, It didn’t appear like that much time had passed. All it would have taken was a cold night for the lake to freeze over again. Honestly, I was bugged by the sense of time in this particular episode.

While saving the men, Viserion was harpooned by the Night King; who, might I add, could easily win a gold in the Olympics for the javelin throw. Hearing Viserion’s scream of anguish and seeing Dany’s face broke my heart. It is any mother’s nightmare to see their child mortally wounded, but there was nothing she could do for him but leave when Jon told her to. After all they had the proof they needed.

Before the Night King could kill another of her children, they took off, leaving Jon behind. He should have mounted Drogon as soon as Daenerys landed, but no, he had to go and do some more fighting apparently, which almost cost him his life. 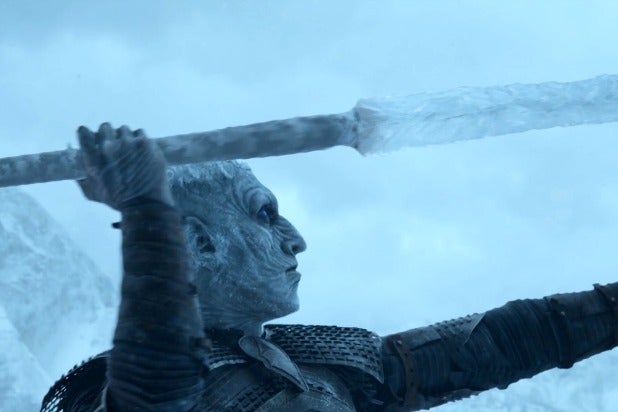 Luckily for him, he managed to get himself out of the water and back onto the ice. Then a familiar face, Benjen Stark, came to his rescue before getting overwhelmed by wights and dying. Yeah, it literally all happened that quickly. I really wish we had seen more of Benjen throughout the series before he became the sacrificial lamb. Anyone else feel that his death happened for absolutely no reason? There’s no time to hop on the back of the horse after Jon? Really, Ben?

At this point it seemed like the right people had won and everything was A-okay until Viserion gets dragged out of the icy water and turned by the Night King. Game of Thrones has zombie dragons now. Nothing surprises me.

But now there are so many questions going through my head. Will the Night King go over the wall before the others? Does the dragon fire now turn people to ice? Will the dragon fire have the capability to turn people into wights? Will they equip one of Qyburn’s scorpions with dragonglass arrows to kill the dragon? Can two fire breathing dragons overpower an ice one? Will Tormund ever have a chance with Brienne? Can Littlefinger get any worse?

Stop fighting, you are tearing this family apart!

The Sansa and Arya saga could have easily waited another episode in my opinion because it didn’t seem to gel well with the rest of the episode and just consisted of a lot of questionable actions. Arya confronted Sansa with the letter that she wrote years ago. I would have expected her to be a bit more understanding about the situation, but I was very wrong. To make it worse, Sansa started sounding a whole lot like Cersei Lannister. If she hadn’t said that if it wasn’t for her there would be no Starks in Winterfell, I think she could have gotten through to Arya better. Right away I could tell that this was the wrong way to go with Arya. Arya, however, should not be judging Sansa on her actions as a hostage. They have both been through so much and should be better than this.

To make it worse, Sansa actually seeks out Littlefinger for advice, which would make Caitlyn AND Ned roll in their graves. The fact that they can’t see they are being played like fiddles by Littlefinger is infuriating. They need to sit down and talk it out. Honestly, I really hope they cop on quick. They both need to sort themselves out or there won’t be any Starks in Winterfell by the time Jon comes home.

What did you think of the episode? Let us know in the comments!

Tendai Muzwidzwa
tags: Beyond the Wall game of thrones season 7 GOT S7E6 Review
0