Welcome all, to another round of Comicphiles! This week I’m looking at some surprising entries that might be up your alley, but might not quite be up mine. 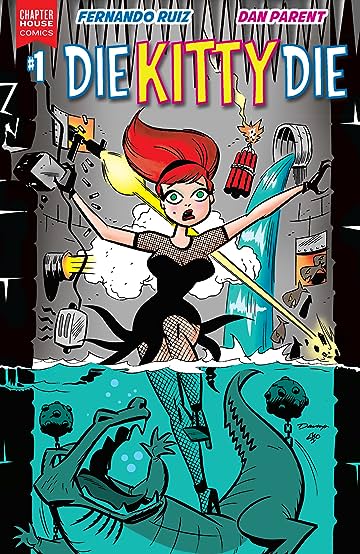 Die Kitty Die has a nice bright 50’s art style. It looks like it deliberately took its cues from Betty Boop and Archie Comics. This makes it fun to look at.

For me, comics that have an open, vibrant art style are much more accessible than those with heavy inks
and lots of dark shades. In terms of plot, the opening riffs off of its visual (and narrative) cues, making lots of jokes about boobs that are so obviously self-aware that they’re actually pretty funny.

It begins with a classic date-story set in 50’s America. That setting morphs into a modern one, and jumps to plenty of jokes about how weird and over-complicated the mainstream comics industry is.
This is also fun and refreshing, but it gets tired quite quickly – to the point of feeling like the creators have an overly clever axe to grind. This is the self-awareness trap. Die Kitty Die falls into it like a baby rabbit.

Another thing – there’s a lot of nudity, but after a while that feels like the creators are trying to have their cake and eat it too. Self-awareness doesn’t mean you can be as gratuitous as you like, it means that you have more space to use gratuity for self-aware purposes. That is not the case here and I don’t like feeling pandered to with nudity.

I won’t be continuing with Die Kitty Die. 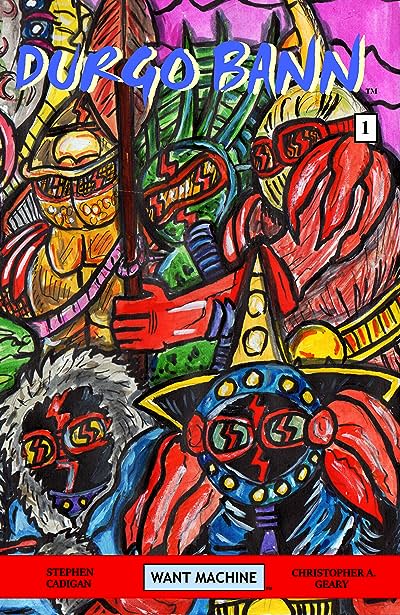 Art by Christopher A. Geary

This comic is painted and that’s a selling point in the blurb. It looks it as well. Painting a comic is a nice hook, but it isn’t used very well. Really the art style is a little too busy. The colours are heavy. The lines are heavy. The images are quite cluttered.

The plot leans towards self-involvement and over-seriousness. It begins with a character hunting robot animals while thinking about how much he wants to hunt humans. Then we’re in a city-scape and our narrator starts a monologue about what a firm but fair police officer he is.

Ultimately, the dialogue is flat and more than once the narrator just describes what’s happening on-panel. I can’t tell if this was a case of script first, art later or art first, script later. In either case, the dialogue and imagery don’t really support each other. This leads to a dissonant feel that bleeds into the whole comic.

In general, Durgo Bann looked like a punky, sci-fi Dredd-esque jaunt, but in general it’s a little too sophomoric to pull me in.

For me, not a keeper. This week was a strange one. I like indie comics in general and what I’m looking for is a sense of fun and novelty. I like when an indie creator has a neat idea and plays with it over 20 or so pages. For me, real gold lies in providing an antidote for all the grimdark navel-gazing in mainstream media (not just comics). If I pay 3.96 I want to smile. Get Away doesn’t dance or sing or make me laugh. I buy an Indie comic hoping it’s good and wanting to be positive, but Get Away made me want to… get away.

Internet-breaking awesome puns aside, the art is quite flat and is awkwardly composed. There isn’t much of a plot and the main character is a clown that hates being called a clown. This isn’t some commentary on how we identify, he’s just unhappy being a clown. That’s a decent idea but it’s like the creator picked up a guitar that was tuned by a novice and then re-tuned it by ear.

I’m not trying to be negative here, but there wasn’t much in Get Away for me to like. Clown on a plane being angry. The complaints in the story are a little too pointed – at one point the Clown says: “Goddamned Society. That’s the THEME of a massive chunk of literature, not what characters should say. The main character says this sort of stuff a lot and for the second time today. I felt like the creator was grinding an axe.

I wanted to find a comic I loved with Get Away, but I won’t be continuing with it.

That’s my comicphilia this week! Maybe I’ll get a winner soon. DId you read any of these and think differently? Let us know below!