So I don’t know about you guys but right now all I’m thinking about is Suicide Squad! I know I’m driving my friends and family nuts by talking about it, but I am just far too excited for this movie coming up! So yep, you’ve guessed it!

This week’s Style Saturday is based on Harley Quinn and her Puddin’, The Joker.

Both of their styles have changed quite a bit for the upcoming film directed by David Ayer, and it has been a bone of contention among many fans. Even I wasn’t too keen on the Joker’s look at first glance, but I have to admit it’s really grown on me in the last few months. Harley’s outfit, well I have to be biased here, but I absolutely love it, especially after wearing it as a cosplay, it just makes you feel like a badass, especially since it was modelled after Debbie Harry!

So without any more rambling from yours truly, here’s this week’s Style Saturday, Squad style!

Our Harley is a confident girl and that means that yes, her clothing style is quite confident too, especially when it comes to her look in Suicide Squad. Gone is the jester outfit we all know and love, replaced by shorts, heels and a lot of studs and tattoos. 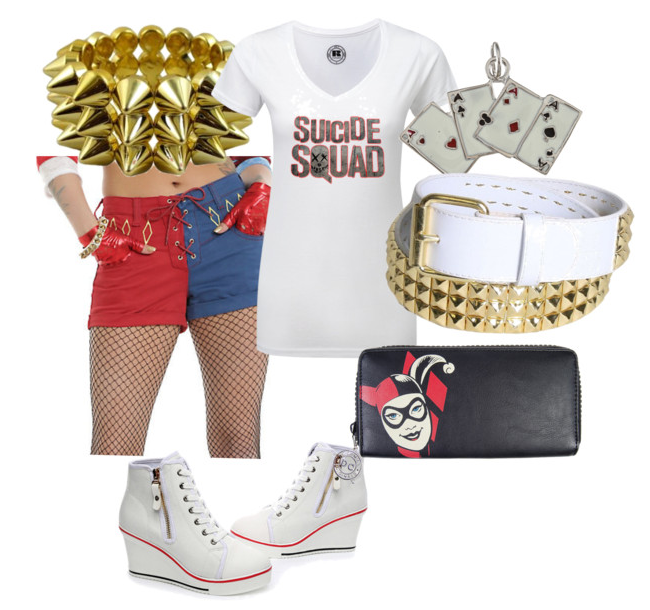 I wanted to keep the shorts for this look because it’s a great look for Harley, but of course you don’t have to go for the booty shorts she sports in the film because let’s face it, who wants to walk into a cinema with their butt cheeks hanging out the end of their shorts? It’s just not comfortable! The better alternative I’ve found are these denim jean shorts which are modelled after Harley’s look in the film. They even come accented with little diamonds on each side, a nod to the playing cards linked to herself and her Puddin.

The shirt is just a tie to the film coming out next week, a little homage if you will! SS Harley loves her studs so we’ve kept that in the look with her 3 row studded belt, and her studded bracelet. Both are very easy to find online and even in charity shops!

Some people don’t like wearing heels so a wedge can be easier to manage, but even if you can’t deal with a wedge then normal sneakers will look fantastic with this look!

Finally, a little playing card charm around your neck, and a Harley Quinn clutch purse will really offset this look, giving you something to feel badass in when you go to see Suicide Squad in the cinema next week!

Harley’s Puddin has taken a large leap in the new film coming out. Gone are the purple suits, replaced by long crocodile skin coats, tuxedos and shirts, all topped off with tattoos covering most of his body. It’s an extremely different look to what we’re used to seeing on Mistah J really, but it seems to work for the character within the confines of Suicide Squad. 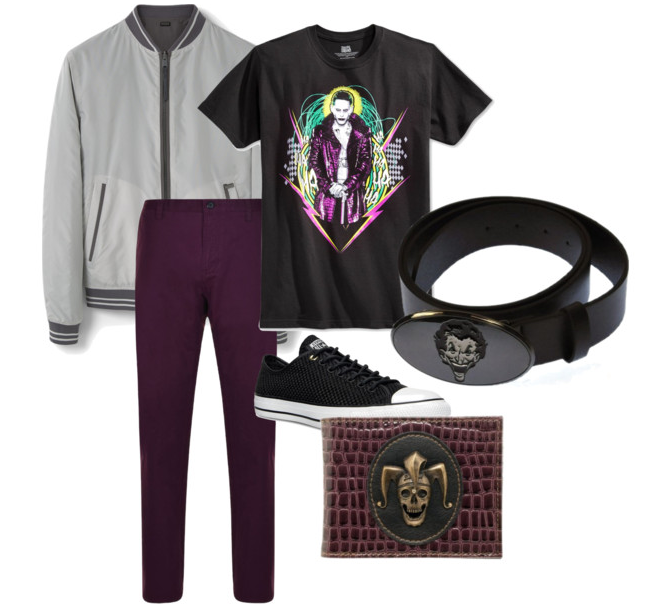 This look is a little more toned down than anything you may see The Joker sporting in the film, but it’ll still pay homage to the maniac Clown Prince of Crime! We’re starting this look with a lovely silver toned track jacket which is a nod to the silver blazer the Joker wears in the film.

You could dress this up a little with a wine coloured shirt underneath but to keep it more casual I’ve teamed it with a t-shirt with Mistah J’s face emblazoned right front and center. Harking back to the original outfits worn by the Joker, we’ve got these gorgeous deep purple chino trousers.

Once again, if you want to dress these down just team them with a pair of converse or sneakers, black preferably! The belt is simple yet stylish with the Joker’s cartoon image embossed on the top. And topping the entire outfit off is the wallet styled after the Joker’s crocodile coat in Suicide Squad, looking quite expensive with the Joker skull printed on top.