5 Reasons Japan Is Not That Great – Life In Japan

5 Reasons Japan Is Not That Great – Life In Japan

I’ve been living in Japan for just under a year and a half now and have been, for the most part, using this column as an excuse to gush about it. Fourteen years ago something awoke in me that would, fourteen years later, take me to the land of the rising sun, and while I’ll probably tell you it was triggered by Shibuya Kei or something, the truth is it all started with Cardcaptors. Yeah. The American one. I hate myself.

Like any distant dream, for every aspect of it that fits the fantasy, there are two or three that jar violently with it. Living in Japan is pretty much like living anywhere else; it is what you make it. But there are certainly a few quirks to Japanese culture that I wish someone had told me about before I hopped on a plane. So allow me, dear reader, to be your someone, and come with me on a rather awkward journey into the negative qualities of Japanese life that no one seems to want to talk about.

Japanese People Are (infuriatingly) Polite…
If someone asked me to sum up Japan in a sound effect, it would be that noise you make when you suck air through your teeth. Like if you see someone hurt themselves and want to appear sympathetic while being silently thankful that it wasn’t you. In Japan, that sound is like ‘Galway Girl’ was Ireland in 2012. You hear it absolutely everywhere whether you like it or not. Frequently not.

This is because the Japanese have a serious problem with confrontation. They’ll generally go to any and all lengths to avoid any kind of argument, and while that sounds good in theory, in practice it can be next to impossible to know what they’re thinking or where they stand on an issue. Words like ‘chotto‘, which directly translates as ‘a little…’, are used like conversational ‘get out of jail free’ cards. Instead of saying ‘I can’t meet Wednesday, I have a thing’, Japanese people will usually say ‘Wednesday is a little…’ and we’re just supposed to finish the sentence ourselves. A little what? A little difficult? Impossible? Perfect? What? Tell me with words. Not teeth air. 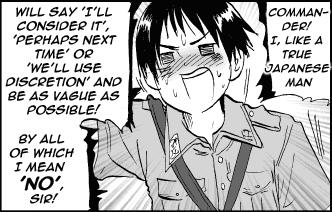 And you better learn to read that teeth air, because if you don’t you’ll probably hear ‘kuuki yomenai‘, which literally means ‘can’t read the air’, referring to someone unable to pick up on the inexplicably inscrutable social clues that Japanese culture relies on. So while ‘polite’ might be a positive adjective in most of the world, Japan could certainly use a little less of it. Thankfully there is a place where politeness dares not follow them…

…except In Train Stations
In train stations, all bets are off, motherfuckers. That trademark Japanese courtesy? Forget about it. It’s every lonely, bitter salaryman for himself on the morning and evening commutes. In stark contrast to just about every other social situation in the country, inside train stations people will barge through you like your mam at the Chinese buffet for the sake of shaving minutes, sometimes seconds, off their travel time.

Have you ever given up your seat on public transport for an elderly man or pregnant woman? Of course you have, it’s the correct and courteous thing to do. Not in Japan. If they’re up and lithe enough to lurch their way to the station, standing for a little while longer won’t kill them. I have, on occasion, seen Japanese people give up their seats, but not very often. Maybe all that exercise is what’s keeping them alive so long.

Everywhere Has A Cover Charge
One of my friends used to be a barmaid in Golden Gai, a huge cluster of crumpled but crazy bars in the centre of Shinjuku, which is hugely popular with tourists. One of her biggest pet peeves was when foreigners complained about the cover charge at her bar, and while I’m very much a ‘when in Rome’ kind of guy, this is one thing that has taken me a while to get used to.

Admittedly, it’s not such a big deal if you’re drinking all night or going for dinner, especially when the food and drink is cheap, (and tipping is not a thing here, so it kind of evens out) but it’s important to keep in mind as charges can vary wildly from place to place and you don’t want to get caught off guard at the end of a long night.

Japan Might Actually Just Fall Into The Sea
Talk to a Japanese person for long enough about their country, or indeed any emigrant who has lived there for a considerable period of time, and it’s inevitable that someone will tell you Japan is a tremendously safe country. In many ways, this is very true; crime is generally low (street crime particularly so) and you can, generally, walk around at night without having to worry for your safety. That said, while Japan might not have many stabbings or street muggings, occasionally the very earth beneath your feet shakes with the force of a thousand suns.

While most Japanese people brush off earthquakes as a semi-regular, usually harmless, occurrence (and they’re usually right), they can, from time to time, be very very harmful indeed. Just a few weeks ago the city of Kumamoto made international news when two earthquakes, at 6.5 and 7.0 respectively, split apartment blocks in two, tore roads in half and made for some genuinely chilling photos that looked as if they were lifted from some Roland Emmerich disaster movie. Mind you, you probably knew all about that. What you might not know about is that Japan has long since been preparing for something called ‘Tokyo X Day’, a day on which, sometime in the next 30 years, Tokyo and its surrounding areas (where I fucking live) will be hit by a catastrophic magnitude 7 earthquake, killing an estimated 23,000 people.

You might also not know that the Japanese government have gone about preparing the citizens by distributing a bizarre, terrifying manga outlining what that day might look like and how it would play out. The manga includes advice on how to make fly traps to keep refuge shelters sanitary, how to use tights and scarves as emergency bandages, and – I promise I’m not making this up – how to fashion diapers out of plastic bags. Apparently this has been described as a ‘highly imminent scenario‘.

Tell me again that Japan is a safe place.

In Japan, getting in with a good company is the key to happiness and you will bend over backwards to please the company if that’s what company-sama desires. Most office workers are expected to work upwards of 10 hour days (most employees aren’t explicitly told to do this, but do so out of a sense of duty) and if your company wants you to work across the country, away from your family, that’s what you’ll do; no discussion. Promotions are based on seniority rather than performance, meaning if you stay in your misery-inducing desk job on the dimly lit 2nd floor for long enough, you’ll almost inevitably get to move up to the slightly brighter 3rd floor, regardless of whether or not you’re actually any good at whatever it is you do.

The results of this affect population both directly and indirectly. In terms of pure logic, what’s the point of having kids if you never see them? If you know there’s a chance your job will just pull the rug out from under you and send you to the other side of the island away from them five days a week, why bother bringing kids into the world? With more and more women choosing to enter the workforce, without the option of a realistic work-life balance, most women (and men) just aren’t bothered adding more pressure onto themselves.

In a more indirect way, Japan has one of the highest suicide rates in the world, and that kind of work-based lifestyle, constantly kow-towing to everyone above you, knowing full well the only way out of this job you hate is to stick it out long enough to get dragged up a floor to one you might hate a little less, without a family or support network to come home to, can only be facilitating that darkest of statistics. It’s a regular occurrence on the morning commutes that trains will stop due to ‘passenger injury’, Japan Rail’s rather ominous legal-speak for ‘someone jumped in front of the train’. While some of you may have just gasped at that, Japanese people usually sigh. They’ll be late for work now. And work is, after all, all that really matters.

This is all quite negative, and I want to reiterate at this point that I really do enjoy living here (which I’ll elaborate on next time) and also that some of these things are gradually improving. Large Japanese companies have apparently started warning employees that expecting their colleagues to ‘read the air’ in meetings and discussions is not acceptable, and as more and more international companies impress Japanese workers with their more relaxed atmospheres, domestic names are taking note and implementing changes too. There’s been talk of serious immigration reform to combat the population crisis, and even whispers of something as drastic as financial incentives for having families.

In the end, Japan is a beautiful place, but like anywhere else on earth, it’s also a bit fucked up.

Have you lived in Japan? What do you think? Let me know in the comments!

0
0   0
previous COMPETITION! Win Fantastic 'Everybody Wants Some' Merchandise
next Stan Lee Weighs In On Civil War