XCOM 2 is the long-awaited sequel to my favourite game of 2012, Enemy Unknown. It was my introduction to turn-based tactics games and it has remained one of my favourites since its release. XCOM 2 is a challenging and incredibly satisfying game, it’s just unfortunate that the swath of technical issues in both performance and gameplay make actually playing it the biggest challenge I faced.

The story takes place in a world where the original XCOM project failed; the aliens have conquered Earth and called themselves ADVENT. Central officer Bradford returns to bust your character out of ADVENT’s control. Once extracted you’re introduced to a re-activated XCOM group that operates on a smaller scale aboard a cobbled together alien transport ship called the “Avenger”. The game begins to teach you base management fundamentals of researching technologies, constructing new items and facilities, recruiting soldiers and viewing the world map to decide what moves you want to make first. XCOM 2 does a great job of easing you into the swing of things with some hand-holding at first and persistent reminders from your advisors of what you should try to keep on top of. It’s a stark contrast to the bare-bones tutorials of Enemy Unknown and it’s a welcome change to say the least.

From here, your biggest challenge is also your most valuable resource – time. You can investigate leads on a variety of things like supply caches or groups of recruits, but spend too long fleshing yourself out with small boons and the hammer of ADVENT will eventually clock you the alien’s strong one; the Avatar Project. The aim of this mysterious venture is unknown but it’s strongly advised that you’re to keep on top of it by severing any progress made as it’ll be game over for both you and humanity. ADVENT also begin upping the ante with reactionary moves known as Dark Events. Dark Events serve as the aliens method of putting the squeeze on various aspects of the resistance with actions such as sending UFOs to hunt down the Avenger and increasing the cost of recruitment by performing nightly raids on civilians. You can counter these events with Guerilla Ops that can remove one of the upcoming Dark Events, the only question is which one is the most bothersome to you at the time. 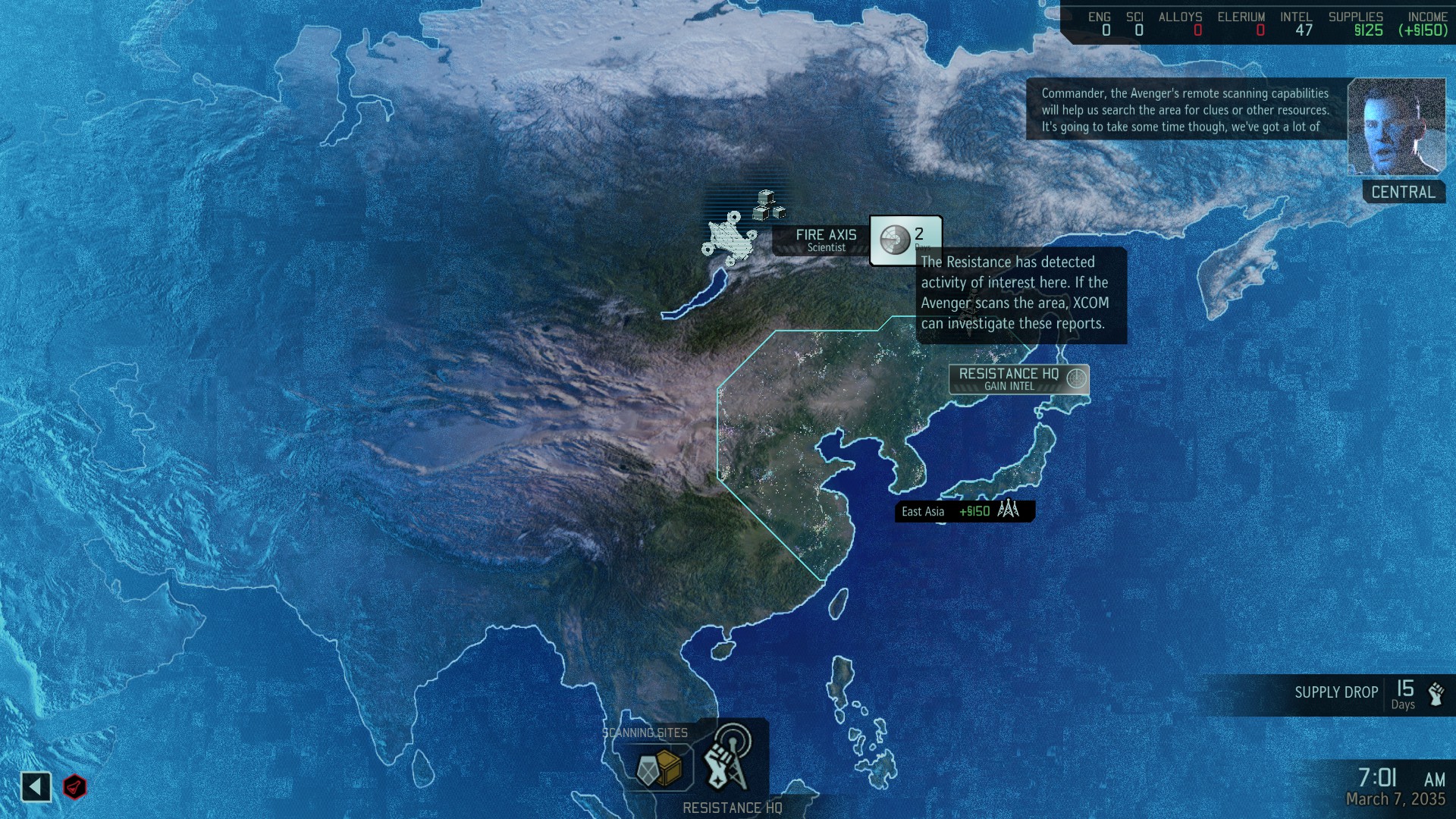 Intelligence also plays a huge role in making or breaking your victory in the war. Gathering intel can come as part of missions or leads and you can spend it contacting new regions of the world to establish a network with other resistance cells. You can buy items at the black market or get a heads up to hidden Dark Events, but the risk of overspending a valuable resource again comes into play. You’ll be playing catch up a lot if you don’t run a tight ship and that’s one of the challenges XCOM 2 brings to the table even stronger than it’s predecessor.

XCOM 2‘s management system feels and moves faster. You’re constantly on edge, trying to micro and macro your way to be prepared for new problems that can (And will.) arise at any moment. The game does a significantly better job at showing you the different systems and how they mesh to give you a firm grasp of the situation at all times, provided you maintain it. Your biggest worry from that point on is how you’ll take all of your efforts into the battlefield.

The soldier classes of XCOM 2 fare a little differently from those of Enemy Unknown. Your heavies and snipers have returned, but assault and support classes have been stripped away and along comes the new “ranger” and “specialist” types. These new classes change the type of approach you might take to missions entirely. The ranger boasts close-quarters abilities and weaponry with shotguns and blades. Their skills can swing widely from dealing higher damage in melee attacks to remaining concealed in fights, allowing them to flank unsuspecting enemies. The specialist brings a little mechanical buddy known as a GREMLIN with him to the field. The GREMLIN’s main use is remote hacking of objective-related tech during missions, however with upgrades you’re able to change the focus of the specialist’s use entirely. You can use it to remotely heal soldiers or hack into mechanical enemies and stun or control them temporarily. The new classes are fantastic additions and the aforementioned swings in skills allow you to cater each soldier to fit any strategies you might come up with.

XCOM 2‘s combat is a cruel mistress. It’s a crucible of missions filled with overwhelming odds and high-stakes risks form an intensely stressful experience. The variety of missions can determine whether your squad will hit the ground running for cover or can arrive concealed. The introduction of concealment allows you to manoeuvre soldiers around the field to set up ambushes and get closer to the possible objective. It raises the risk of accidentally walking soldiers into patrols of the new terrors XCOM 2 brings. The enemies of XCOM 2 are drastic variations on the original foes of Enemy Unknown, as well as new ones that bring a new range of problems you’ll have to deal with. There is riot control ADVENT officers that can stun soldiers into unconsciousness, acid-wielding aliens in mechanical suits that are designed to split up squads or force them out of cover and reptilian snake ladies that snatch soldiers from the safety of cover into submission.

The strategy of retreat and overwatch no longer applies; the new enemies in XCOM 2 are made to dig you deeper into an encounter to make sure you’ve got nowhere to run. These threats coupled with the occasional timer on certain missions ratchet the stakes of XCOM 2‘s missions up a notch. One false move and it can cascade into losing multiple soldiers or flat-out failing your objective. The war on ADVENT is one of attrition, so leave any room for error and the game will be there to show you in tenfold how you messed up. But take enough of your lumps as a rookie strategist and you’ll learn and grow into something with a fighting chance to kick ADVENT where it hurts the most and free Earth from the shackles of an alien empire.

However all of this becomes a rather sour experience when XCOM 2‘s technical aspects throw the game into what seems like unfair territory. Enemies can devastate soldiers you’ve hidden inside buildings with melee attacks from the other side of walls or even snatch and trap your people from floors below multiple stories and I’m not sure if this was intentional or not. Watching my sniper be grabbed from the roof of a building onto the ground floor with two floors of solid building between my guy and the snake that grabbed him was a frustrating experience to say the least.

Another major problem XCOM 2 suffers from is its technical soundness. In my 40+ hours with the game I suffered many cases of crashing, freezing, stuttering and a range of performance problems that are no excuse for something developed on a single platform. Reports from friends on higher-end systems than mine corroborate that XCOM 2‘s launch has been less than ideal for users with any sort of machine and that makes the game harder to recommend despite the excellent gameplay underneath.

At the end of the day, XCOM 2 exceptionally builds upon the solid foundations set by the first Firaxis game. It swings harder punches and expects players to roll with each one, otherwise they’ll find themselves on the end of an alien boot heel once more. However its lack of technical prowess staggers the experience so harshly that if you’re still on the fence, I’d wait for it to be fixed up.

0
0   0
previous Axiom Verge To Release For Wii U And Xbox One
next Beyond: Two Souls PS4 Review