Rhythm action games might seem like a thing of the past to those of us in the western world, but that’s certainly not the case in Asia. Where you won’t find as many plastic guitars gathering dust in the closets of many Japanese gamers, you will find that, for example, the PSP is still a hugely popular platform, boosted by the number of hugely popular rhythm-action games in its back catalog.

Being a massive dork when it comes to moe-anime means that I’ve currently got, in my collection, more of these rush-job cash-ins than I’d like anyone to know about. One of which is the 2012 PS3 re-release of 2010’s PSP title K-On! Houkago Live!! which, in addition to being undoubtedly the cutest game I’ve ever owned (suck it, Little Big Planet), it’s also one of the most infuriatingly difficult.

The songs in K-On! Houkago Live!! are mostly taken from the first season of the show itself, and if you happen to be familiar with them, clearing them on standard difficulty really isn’t much of a challenge. Even the new songs, taken from CD releases independent of the show, are handy enough to get the hang of. Plus each of the girls has a slightly different play style which means you’ll probably like playing as one more than another. Azusa and Mugi are probably the easiest to play by mostly using face buttons. And even on hard mode their parts aren’t really anything to sweat about. Mio, on the other hand, is an entirely different story.

I remember realizing I was destined to be absolute rubbish at Guitar Hero because I could actually play guitar. Any attempt to hit the correct buttons conflicted with my musical muscle memory about where my fingers should go and it was something I just never got past. The same rules apply here, and despite having practiced the manic, constantly moving, bass line of season 1 opener Cagayake!GIRLS to the point of puncturing the skin on my fingers on an actual bass guitar, I have yet to get more than a minute and a half into it on K-On! Houkago Live!! before the game puts me out of my misery.

Mio’s parts are a combination of face and directional buttons and usually call for repeated strikes of the same buttons on the d-pad in quick succession. As it turns out, hitting the same d-pad button repeatedly in quick succession is not easy on PS3. The soft, dull friction provided by the keys, almost like pressing a particularly rigid human nipple, doesn’t give enough feedback to facilitate such endeavours. A nice sharp click would make it easier, but alas that’s not the world we live in. As a result, even the easier of Mio’s tracks can be pretty tough. If you haven’t mastered the technique by the time you get to Cagayake!GIRLS, the penultimate track on the game’s un-lockable playlist, you should really just give up.

Cagayake!GIRLS begins difficult and only ramps it up the further it goes. What are initially three stroke prompts eventually become five stroke prompts, and although hitting the combos on the upbeats seem easy at first, when it meets the slap-stuff towards the end, you’ll feel like the only way to pull it off would be to become some sort of robot octopus creature. Something with the sole purpose of mastering rhythm-action commands lest your creators pull the plug and send you hurtling back to the void from whence you came. At least that’s how I felt.

I haven’t beaten it. And I never will. I have decided this in an illusory attempt to believe that the game didn’t decide it for me. Mio deserves better than I can give her, and although that breaks my pathetic otaku heart, I can ease the pain by giving them tea and cake and shit on the menu screen. 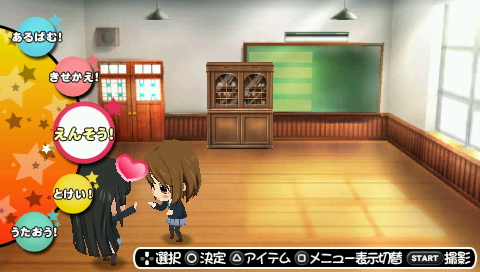