2015 closed a chapter of excellence in the comic book industry with fresh, creative casts of well-established properties and long-awaited arrivals of characters that we feel were well overdue for their own solo series. A testament to the popularity of superhero movies is that it brought a whole new audience casting a light upon the source material that those heroes were born from. This in turn gives a wider reach of the demographic that comics can market to and a greater depth to the content that they can tackle. Serious issues that plague our world can now seep into our favourite graphic novels, because there is interest for it.

An industry once considered a niche is now one of the cornerstones of artistic commentary and a gateway into the future of summer blockbusters. Its roots are proudly heralded from the innovators of the past that created simple character concepts that have resonated with youth and adults throughout the decades. We live now in a time of diversity that showcases different walks of life with the same love and care that was put into the comic pages of those past innovators. However, for every step forward, there is a giant unconventional leap backwards that boggles the mind. On this edition of Back Issues, we give you examples of superhero and supervillain origins that are all style and no substance. Actually. Scratch that. They don’t have style either.

Let’s get this one out-of-the-way. Nathan Summers (AKA Cable) is the son of Scott Summers and Madelyne Pryor. Two mutants with opposite agendas. Scott Summers codename is Cyclops and he is one of the founding members of the X-Men. Madelyne Pryor is a clone of his fellow X-Men member, Jean Grey, a woman who Scott Summers adores. Both have conflicting ideas about their son’s destiny.

Madelyne wants to use him to open a portal to a demonic world as per instruction by Mister Sinister. Scott Summers and Jean Grey want him to lead a normal life. Both notions are thrown askew by a visitor from a different time.

Jean and Scott decide to take Nathan to the future in order to raise him as a soldier as prophesied by their alternate timeline daughter. This is a means to make Nathan (now named Cable) strong enough to one day come back in time and defeat Apocalypse before he destroys the world. In the future that Cable lives, he is trained by the real timeline daughter of Jean and Scott (and not the alternate timeline one that initially brought him to the future), who is his sister and the leader of a resistance that is attempting to overthrow Apocalypse in a future where he has already won.

Here is the “too long, didn’t read” version – A young mutant boy travels through time to become a future soldier, so he can come home to the past and fight a threat that rules the future. Comics are stupid. 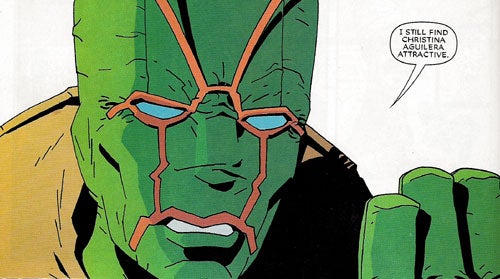 First debuting in the 1980s, Irwin Schwab (AKA Ambush Bug) is a character that takes the bar of absurdity and raises it a couple of notches with each appearance. His assumed residence is planet Earth, but the character is depicted as being disillusioned with reality, so his words on his origin aren’t often taken at face value. The relayed story told is that Irwin one day encountered a suit that came from a planet called Schwab and it chose him as its master.

An alien named Brum-El had sent the suit to a safe haven, so that he might keep the most precious item of his wardrobe safe from the destruction of his home planet. It was along the way that the suit was intercepted by a radioactive space spider and it ended up on Earth instead. Irwin took it upon himself to become Ambush Bug upon donning the suit. Additionally, he gained a companion, as a sock with a metal mask also came with the suit.

The amount of cocaine involved in the creation process is still unspecified.

Created in the 1960s, Jo Nah (AKA Ultra Boy) is a resident of a planet called Rimbor, who ends up getting swallowed by a space beast that grants him the mighty power of penetra-vision. Contrary to what the above sentence would have you believe, this was not a science-fiction fetish comic. While traversing the galaxy in a ship reminiscent of The Jetsons family car, Jo Nah encounters a whale-like energy beast that drips his residue all over his ship. This brings to life his hero persona known as Ultra Boy.

Due to the exposure of radiation waves emitted by the energy beasts saliva, Ultra Boy gains the powers of super strength, flight, superhuman speed and the aforementioned penetra-vision (which is x-ray vision with a more suggestive name). Much like Batman’s utility belt, radiation seemingly has infinite amounts of possibilities in a world of superheroes. We have to question how this exposure occurred when it was the ship that was covered in this beasts residue and not Ultra Boy himself. The two panel instance between his journey and exit of the beast shows us a ship soaked in goo that instantaneously transforms Jo Nah’s body. Did the radiation seep into the vessel? If that is the case then it spread throughout the entire ship in a matter of milliseconds. Perhaps, it is best not to dwell on a character that had so little thought put into him, that they went with penetra-vision as the name of his power.

The tale of Richard Grey Jr. (AKA Black Condor) is one of woe. In the midst of an expedition to Mongolia, Richard Grey Sr. and his wife were brutally attacked and killed by a gang of bandits. This left their newborn son as a lone orphan forced to fend for himself in the world. Thankfully for little Richie, a condor swept in and adopted him for the craic. This generous condor fed him and treated him as one of her own. Through the tutelage of his feathered protector came an admiration for all of bird-kind. The boy turned man revised his humanity to take on a new life as the Black Condor. Being the keen-eyed student that he is, Richard learned how to fly by watching his avian-brothers-from-another-mother, vigilantly. It was all a matter of believing. If you think you can fly and you watch birds for long enough, you probably can. It worked for R.Kelly and it can work for you too.

A man transfixed with feelings of wanderlust, Robert Frank (AKA The Whizzer) is an adrenaline junkie that lives moment by moment in his travels. He is a free roaming adventurer who clutches life in the palm of his hands and this is a spirit that often leads to him winding up in dangerous scenarios. His reckless, carefree attitude is upheld even in the presence of wild, poisonous animals and he was just unlucky enough to find one.

A deadly cobra bite sees him hanging on the edge of his last breath. Only a miracle could possibly save him!

Thankfully, his dad was on hand to offer a transfusion of Mongoose blood. This was just the antidote he needed for the snake venom that had been injected into his bloodstream. The blended DNA of the two animals restored him to health and made him feel a renewed vitality. He could now run at superhuman speed. Yes, it is true. The combined speed of a mongoose and a snake = superhuman speed.

With these cosmic powers, Robert whizzed out into the world proclaiming himself as a stream of urine that would fight crime.

Do you have any baffling backstories to share? Tell us in the comments below!