Raise your ‘sabers in the air, like you just don’t care! The holidays have been hijacked by a force from a galaxy far, far away. A convincing and comforting voice accompanies it and tells us in a reassuring tone that “this is the December we have been looking for”. Star Wars fever has infected the world once again and we could not be happier.

The gateway fandom that unites nerds and norms alike has returned to its former glory at the top of the box office and into the hearts of patient sci-fi fans. Finally, we all have a common interest to talk about with our sports adoring co-worker, Greg. He also loves Entourage, but we don’t care that much about his opinion. A mutual fan of the force is a friend indeed.

Regardless of what film is your favourite, a sense of comradery can always be found amongst friends discussing the hugely popular franchise in detail. Star Wars fans are a curious, inquisitive bunch, who love to breakdown and analyse each of the films. Those from the light side of the force enjoy discussion with fellow like-minded fans despite what they love or hate.  Whether you enjoy/abhor the prequels/the original trilogy is a note of interest in relation to your reasoning behind what made you form that opinion. Contention will always be present in the fandom on what constitutes a great Star Wars feature from a bad one. This being said, one commonality among us all is that nobody wants to remember that there was a holiday special.

So, for those of you who tried desperately to forget, allow us to bring you into our pain as we remind you about the coldest winter in the Star Wars universe.

It’s all about making money at Christmas time. They wanted Star Wars on a product that they could sell in December. The original cast were roped into this due to contractual obligations. Unfortunately for them, the writers of the Star Wars Holiday Special didn’t feel that they should overtly utilise their main stars. Tangential scenes of the people we want to see are woven in with the two centerpiece narratives, involving whether or not Chewbacca’s wife is gonna make spaghetti or shepherd’s pie for dinner and an ongoing contest of who can perform the worst musical number of all time. The answer to the latter is Carrie Fisher in case you were wondering.

The tenuous story on offer starts with Han Solo (Harrison Ford) and Chewbacca (Peter Mayhew) evading the Empire by hiding out on Kashyyk. Good thinking, Chewie! They’ll never look for a wookie on the home planet of the wookies. Unsurprisingly, the Empire finds out where they are and tails them on Kashyyk. This is where we are treated to about eighteen minutes of wookie shenanigans during their annual festive event of life day. Next we get a series of celebrity cameos, coupled with a long cartoon illustrating that Han has been poisoned by a magic talisman. Just go with it. 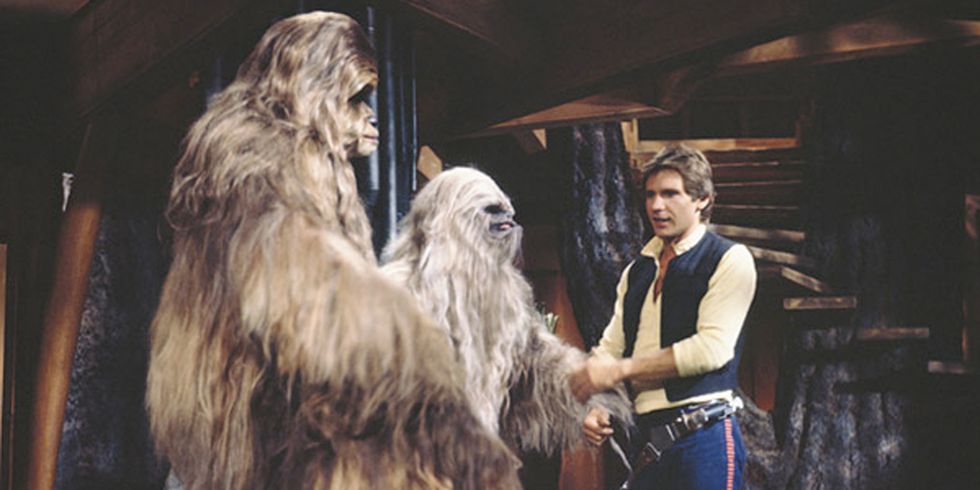 Luke Skywalker (Mark Hamill) then searches for a cure for Han before promptly collecting his royalty cheque and walking off the set after four hours work. After the cartoon, Lumpy (AKA Chewbacca’s kid) outsmarts the Imperials with a convoluted plan and then Han gets cured by Chewbacca and Boba Fett. The allegiance of the bounty hunter to the side of good comes from a place of having literally nothing better to do.

It ends with a segment in the style of Sonic Says that informs us not to do drugs or touch someones no-no zone, because that’s no good. It was something like that anyway. It was boring and there was no need to be invested. Carrie Fisher sings and it’s awful. You might say that she cannot ‘carrie’ a tune.

All the people a Star Wars fan would want to see! Bea Arthur of Golden Girls fame, Harvey Korman of Blazing Saddles fame and Jefferson Starship of psychedelic rock fame.

Alongside the treasure trove of science fiction royalty listed above is Carrie Fisher, Harrison Ford and Mark Hamill doing his best not to look like Mark Hamill.

IS IT REALLY BAD?

Yes. It is an utter waste of time. It blindly pokes around the continuity of the expanded world with the ineptitude of a gungan. Plainly stated, it misses the mark worse than any stormtrooper ever has. It isn’t just bad. It is damaging. By contrast to the widely discredited prequels, the holiday special manages to hollowfy itself by not even having an ambitious story. A mish-mash of stock footage from A New Hope glued together with song, dance and insincere holiday gestures does not a Star Wars feature make. The intentions are fully clear when watching that this was a hack job designed to make a quick buck at the holidays. Stupendously bad. To quote american film and music critic, Nathan Rabin, the film “appears to be written by a sentient bag of cocaine”.

If you feel bold enough to undertake this live-action fever dream, then it is available below for your viewing displeasure!

WHAT MOVIE SHOULD I WATCH INSTEAD?

Literally anything else Star Wars related. Prequels even. Anythin.