Well, it’s Christmas and when it’s Christmas… we get the usual Christmas Holiday movies! Usually I love a good Christmas feel good movie, even the made-for-TV ones because while a lot of them are absolutely terrible, you sometimes get some really great gems. 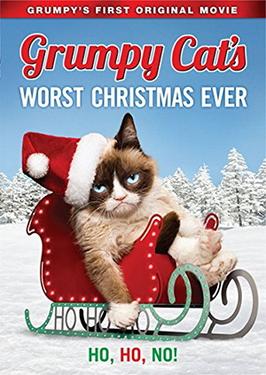 Personally I’m not even sure how to lead up to this. I’ve watched an awful lot of movies in my time, being a film student I’ve even watched some absolutely terrible ones because of classes, but this… this deplorable, poor excuse for what passes as a Christmas movie… is just.. well… it’s… How about you read on to see just why I’m so grumpy about this stupid film and it’s annoying star cat.

Grumpy Cat’s Worst Christmas Ever is a Lifetime movie, and now that should almost tell you enough about the film in question already. I’m going to go ahead and explain the dreadful plot I had to sit through for 85 minutes. Everyone seems to love Grumpy Cat and I’d be lying if I said I didn’t find myself laughing at her memes every once in a while, but when you’re subjected to her whining and moaning in the guise of Aubrey Plaza‘s voice for as long as I was had to, well, you’d almost hate the little creature.

Our tale begins in a pet store where Grumpy Cat herself has been returned twice already by families who cannot take just how grumpy and down our main character seems to be on a daily basis. Grumpy Cat doesn’t care about much, until she realizes that the pet store is about to be closed down due to a lack of money. And that’s where the plot goes a little… awry. We’re introduced to a dog who is worth one million dollars, two idiotic bad guys, and a little twelve year old girl who finds that she can talk to Grumpy after making one single wish. Why she didn’t wish for her mother to win the lottery or something alike to that is completely beyond me, but hey, now one of our main characters can talk to Grumpy and we don’t just have to listen to Aubrey Plaza providing a voice over.

The dog worth one million dollars gets dognapped by the bad guys, Grumpy gets pulled along by the little girl Chrystal and we, the viewer, have to sit through Grumpy‘s complaints and Chrystal’s attempts at being a hero. Not to mention bad guys who would be better suited to a Home Alone sequel or something like it.

Well, obviously we’ve got Grumpy Cat and Aubrey Plaza providing the voice of the famous little cat and while I usually don’t mind Plaza at the best of times, I really wanted to scream at her and her stupid idiotic monotone voice. Then we’ve got… well… a whole load of z-list actors, only maybe two of which I recognized. One was Chrystal played by Megan Charpentier who you may know as The Red Queen from Resident Evil: Retribution, or as one of the feral children from Mama. The other was Tyler Johnston who Supernatural fans may know as Samandriel.

Apart from that? Well… nope, didn’t know a single other actor. I doubt many people would.

IS IT REALLY BAD?

Can you tell from my words already? Yes. It is absolutely and utterly awful, but don’t worry Readers, I’m going to tell you why so you can stay the heck away from this utter tripe!

This film breaks the fourth wall, and not in the amusing way that we all hope Deadpool will do in a few months.

Oh no. This damn film talks to the audience every couple of minutes, in fact, Grumpy Cat tells us how things will go down, or how she hopes things will go down. And what follows? A nice little clip or two of what could happen, except these go on too long and they’re not even funny! The voices of the animals, oh they’re not just annoying but they’re unwarranted. Yes, they speak to Grumpy but that’s it, and we don’t need to hear what they’ve got to say!

While we’re introduced to other characters, Grumpy Cat is never far behind! She’s thrown in as a thought bubble or a little pop up somewhere on the screen to comment on what’s going on. Attention seeking? Why yes, she is. Oh! Another annoying thing about Aubrey Plaza voicing Grumpy is that she keeps meowing after sentences! She’s a cat, Aubrey, we know she meows, you don’t have to keep doing it to remind us!

While the cat is annoying, and while we’re told that no animals were harmed, there is one single split second of a scene where the pet shop owner throws Grumpy and I mean literally throws her and it almost unnerved me just slightly. There was no need for it and it made me feel bad for Grumpy being thrown into these stupid situations that weren’t warranted at all.

There is a moment where they actually have Grumpy using a small paint ball gun on the bad guys, during which she argues with herself in a thought bubble about how idiotic the scene actually is, and I couldn’t agree with her more!

Toward the end of the film, Grumpy actually tries to sell some merchandise with her face on it, and I was suddenly reminded of why this film was made in the first place. It wasn’t for Christmas cheer, it wasn’t to remind us that animals are for life not just used as presents, it wasn’t to show us that you can have one friend in the world and be absolutely fine with that even if it’s a cat… nope, it’s for us to go out and buy Grumpy Cat on a mug, or a shirt or a baseball cap!

WHAT SHOULD YOU WATCH INSTEAD?

If you want Christmas combined with talking animals, why not watch Look Who’s Talking Now, or or maybe The Grinch? It doesn’t have a talking animal, but Max the dog is way better than this entire film!

Should I be renamed Grumpy Lauren?