As a kid I had a weird obsession with sharks and dinosaurs, mostly due to the films Jaws and Jurassic Park. I had everything to do with both. I had books about sharks, and I had magazines, wallpaper and bed sheets with dinosaurs plastered all over them. I would have much rather picked up something about sharks and dinosaurs than I would Barbie or Baby Born for example. So imagine my delight when a television show emerged which eventually merged my love for both sharks and dinosaurs! Street Sharks was an animated television show which ran from 1994-1997 as part of the Amazin’ Adventures line up and was produced by DIC Entertainment. 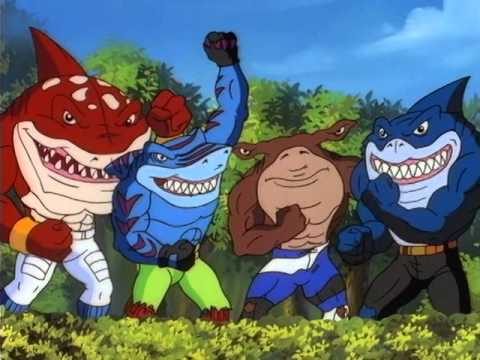 Street Sharks is exactly what it sounds like… well, not exactly, but yes it’s as damn cool as it sounds! The story is about four brothers, John, Bobby, Coop and Clint, and their professor father, Dr. Robert Bolton. Bolton and his partner Dr. Paradigm created a machine called the ‘gene-slammer’ which could splice DNA and change aquatic animals into hybrids of humans and animals, ones which could walk, talk and do everything else that humans can do (which includes flirting, but more on that later!).

Bolton prevents his partner Paradigm from using the machine for evil doings and personal gain but is changed himself into an unseen monster and disappears, although it is thought that he does help his sons from the shadows throughout the series. Paradigm changes the four brothers into four different hybrid sharks and thus, the Street Sharks are born. Their mission is to fight against Paradigm and the different creatures he sends after them each episode. Later in the series they also introduced the Dino Vengers, a group of… you guessed it, dinosaurs. They’re extraterrestrial dinosaurs who team up with the Street Sharks in order to fight against their own rivals; The Raptor Gang.

The Street Sharks consists of Ripster (Lee Tockar); the eldest of the four brothers, the leader and a hybrid great white shark. Jab (Matt Hill), the laziest of the four, the mechanic, who is a hybrid hammerhead shark who uses his head as a battering ram. Streex (Andrew Rannells), the ladies’ man (see, told you I’d get to the flirt!), the rollerblader and the tiger shark, he received his name from the purple streaks on his body. And finally, Big Slammu (D. Kevin Williams), the strongest but youngest out of the four brothers. A footballer and skateboarder, he is a hybrid of a bull shark and whale shark. The four brothers are often joined by their friend Bends, Moby Lick (a killer whale), Rox (mako shark), El Swordo (swordfish) and Mantaman (manta ray).

The premise of the show each episode was to foil Dr. Paradigm (Dr. Piranoid) and his plans to destroy the Street Sharks and take over Fission City, and later, the world. Toward the end of the third and final season, we are met with the Dino Vengers (only really brought in to sell toys, let’s be honest), who ally themselves with the Street Sharks in order to defeat The Raptor Gang and destroy Dr. Paradigm once and for all!

The show itself was one I would tape on VHS (hi kids, I’m that old!) and watch over and over again. Being obsessed with sharks, things that were supposed to be terrifying and scary and the stuff of nightmares, finding a cartoon catered toward kids where the sharks were the heroes, it was something that just brought a gigantic smile to my face. The biggest memory I have of the show isn’t actually of the show but of the toys that Mattel released during the show’s run.

Being such a massive fan of the show, my parents made sure I had each and every one of the original Street Sharks. Ripster was the first one that my parents bought me and he was the one I wanted the most. He was the leader, he was the great white shark and he just looked so damn cool! The boxes that the sharks came in were so well designed as well. Each Street Sharks toy was placed in a box behind bent bars that came complete with teeth marks and bites throughout the box, something so fierce that it matched the boys themselves perfectly. Oh! The best thing about the toys? Pull back on their fin and their mouth would open even more to reveal a mouth filled with sharp terrifying teeth! Amazing.

How do I feel about the show now? Well, there’s nothing like it out there at the moment. It reminds me now of Teenage Mutant Ninja Turtles, but for whatever reason the Street Sharks didn’t retain that same popularity, which I find terribly disappointing. The show made me laugh, it made me root for the brothers, it made me want to tune in to every episode to make sure they defeated Dr. Paradigm. And of course, it made me want every single toy which I’m sure was Mattel’s idea in the first place!

I would happily revisit the four Bolton brothers and Fission City, if only to reminisce about how awesome and crazy the idea of four sharks saving a city is. It’s something that not many people have spoken to me about and it makes me wonder: just how many people were fans of Street Sharks, and for how many others has it become a Forgotten Childhood classic? It’s definitely part of mine.