The Halo series has been a monumental franchise from the beginning, shaping the way shooters work on consoles with Halo: Combat Evolved and Bungie redefining the online multiplayer experience with Halo 2. With 343 Industries now manning the helm with its second entry into the “Reclaimer Trilogy” it’s certainly interesting to see how they’ve strived to make Halo relevant with delving deep into the expanded universe and fleshing out the Master Chief as a character rather than a vessel for the player becoming a tumultuous subject among fans and critics. Halo 4’s biggest flaws was its blatant lack of plot development, leaving a lot of characterization and important knowledge for players to find in extended media with comics, books and an online webseries. Fans of the franchise were treated with care and while that can be lauded there was a severe drought of necessary information that when questioned was mostly answered with “Well if you read the books…”

Halo 5 is the middle chapter of this new trilogy taking place over a year after the events of Halo 4. After Master Chief goes AWOL, Spartan IV team Osiris is charged with bringing back both Chief and his team of other Spartan IIs. For the majority of the game, you assume the role of Jameson Locke and with your merry band of fellow supersoldiers will spend your time marching to different planets in search of John-117. Peppered between these missions you’ll return to controlling Chief along with Blue Team who are in search of Cortana who is possibly still alive somewhere in some fashion. The first few missions playing as Locke felt really engaging; there was certainly the essence of the honestly deceptive marketing of hunting down the Master Chief. Sadly enough at a point it becomes a game of cat and mouse where I spent most of my time wondering what Chief was doing when I was playing as Locke.

There is definitely a significant weight to the actions of Locke’s missions in terms of story but it doesn’t overstay its welcome other than feeling a little padded out at times, even if the missions it provides are still lot of fun to play. The problem of the series’ extended media being a sort of necessity makes a return with certain characters but isn’t to the degree Halo 4 had suffered from and enough information about characters who haven’t appeared in the previous games is fed to you throughout the six to eight hours you’ll spend finishing the campaign to not simply leave you in the dark. Being the middle chapter of the trilogy the campaign, it definitely starts strong and handles the ending well in a way that has me looking forward to Halo 6. It ramps up and finishes satisfyingly with hooks for the obvious sequel that don’t feel abrupt in the same style as Halo 2 had back in 2004.

The campaign’s structure follows your typical Halo title but trades in a lot of the more open sandbox warzone the original trilogy was known for with tighter environments filled with small pathways and more verticality. The addition of the squad members adds a lot to how encounters with enemies go but still require the player to be somewhat competent. Your AI pals will certainly help out any way they can but you can’t coast through the game on their shooting prowess but they can still hold their own and distract enemies while you take a quick breather. With the team dynamic also comes a down-but-not-out system similar to Left 4 Dead and other co-op shooters, but the AI tends to ignore all danger around them when reviving the main player which works against itself in a lot of the more difficult missions and fights.

For example, there’s a certain enemy who can take down any squad member (including yourself) in one hit, so when they managed to knock me down about eight times out of ten that would mean I’d be wiping and starting back at a checkpoint as I watched my teammates one by one come to my aid and get knocked down themselves. It’s a minor gripe but it hammered home a poor part of the AI along with fighting such a boring and frustrating fight with that particular enemy. Other than those encounters, enemies tended to ignore team mates who came to revive me when I was downed which pretty much made me invincible throughout most of the campaign. Whether this was by design or fluke I don’t know, but playing on the default difficulty (normal) I wasn’t faced with too much of a challenge.

I enjoyed the campaign a whole lot regardless of its issues. The changes brought to the table are fresh and exciting but has some room to improve if they decide to take the new ideas to the next game. While the Chief to Locke ratio on missions is a little too tilted to the latter’s side there’s at least a decent arc and ending to the story that doesn’t go for the cliff-hanger as heavily but definitely does leave enough for the sequel to pick up on where 5 has left off.

The multiplayer for Halo 5 is divided into two sections; Arena and Warzone. Arena is your standard Halo multiplayer with the return of classic modes but is missing significant staples of previous games like Infection and Big-Team-Battle. It’s currently unknown if these modes will be patched in later but for now they’re absent.

Warzone is what 343 consider the successor to Big-Team-Battle but it introduces AI enemies and MOBA-like ideas to this new game mode. Basic Warzone is a game of holding points, killing AI and players and reaching a ticket limit before the enemy team. Throughout matches things like mini-bosses and straight-up bosses spawn that reward significant points to teams that can take them down which works well and can keep the game feeling like less of a steamroll one way or the other granted your team can figure out where and when these enemies spawn in time. The MOBA comparison returns with Warzone’s in-match progression system and item acquirement. As matches progress you gain levels and instant access to new weapons, vehicles and boosters using REQ cards, single use items that have level requirements and REQ point costs. This requires you to know when is the right time tactically to pull out the big guns or vehicles that have higher requirements and thus give a greater risk when pulling them out as if an enemy manages to get the upper hand you’ll simply lose the weapon or vehicle and waste cards. The biggest problem with the card system is there is little reason to use them in a losing battle.

Towards the end of a match I found most losing teams tended to keep their cards to themselves and save it for something better and it just doesn’t work in those situations at all. The implementation of cards is only made somewhat cheaper with adding the ability to purchase different tiers of packs with real money. If a player spent around €10 they would be able to buy enough higher tier cards that their worth devalues the need to make the right weapon or vehicle choice at the right time entirely, especially when players who buy with the points earned by playing have to play four to five matches of Warzone to buy the highest tier pack. Packs also offer cosmetic options like different assassinations and armour which is great to see the expansive variety of options to customise your Spartan. Warzone feels like a great idea on paper and at times certainly works well with a team of friends, it just can fall apart so quickly at the seams that it’s even worth bothering with if 343 don’t do something to balance it out. 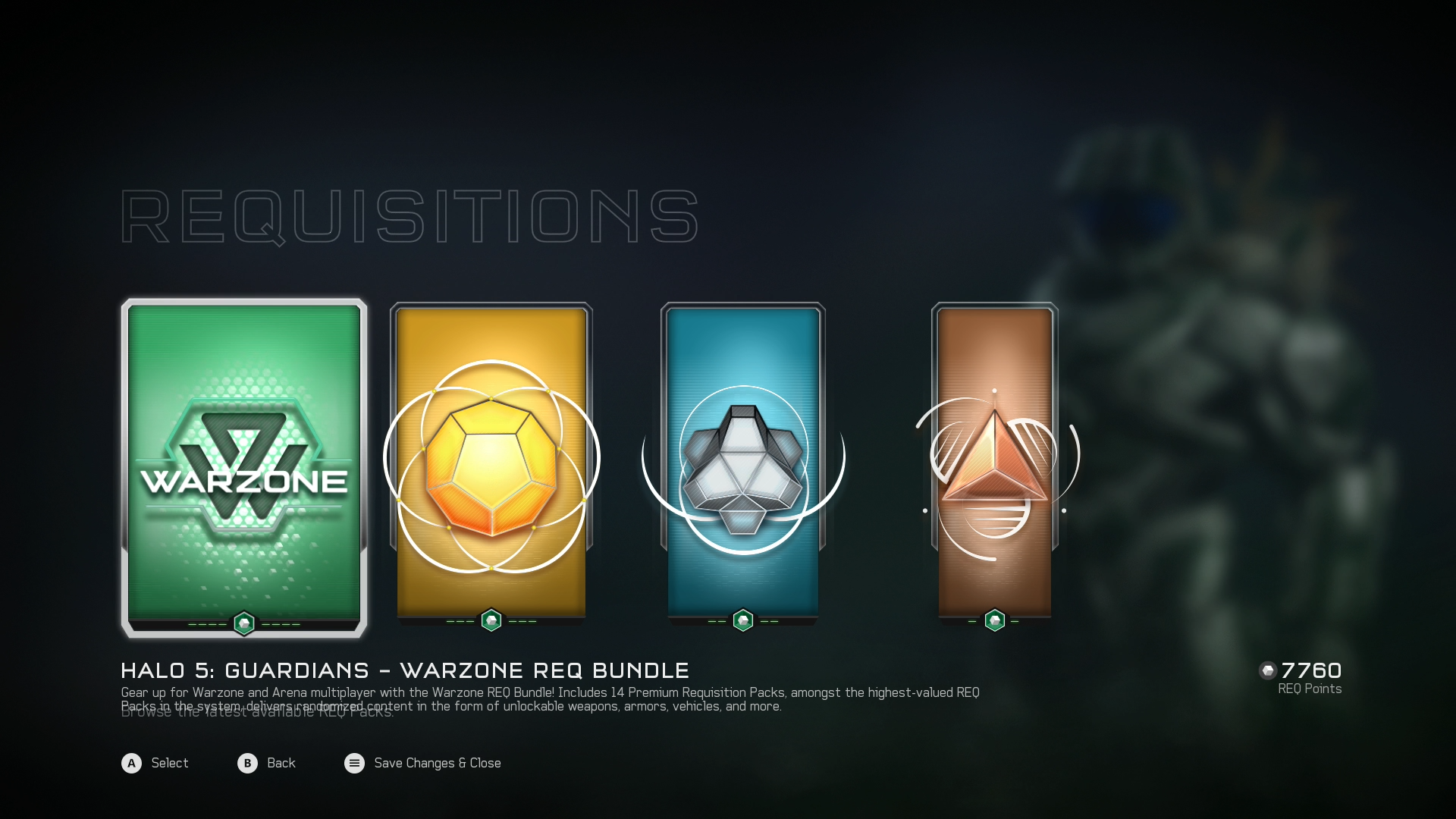 In both singleplayer and multiplayer there’s a new range of movements and abilities you can do that are great additions to Halo’s core gameplay. You have thrusters that can let you dodge attacks and the ability to freeze yourself mid-air during a jump with said thrusters to line up shots to land as you descend. This game is also the first Halo that lets you look down sights on every weapon don’t be fooled; Aiming does not give you an accuracy bonus whatsoever and only offers the chance to get a better look at your target. The Arena multiplayer completely adheres to the original ideals of Halo PVP but totally mixes it up with the new level of agility brought to the gameplay.

It’s worth mentioning that Halo 5 runs and looks great. The work 343 put into texture downscaling to maintain the solid 60 frames-per-second is hardly noticeable and the higher framerate only compliments the faster movement speed and combat even more.

In the end Halo 5: Guardians is a very solid entry and a great middle chapter to the trilogy. It has a little less content in the multiplayer than a dedicated Halo fan might expect but still stands strong with Arena being all you need for classic multiplayer and Warzone showing that the series does indeed work on a grander scale, even if there’s not a whole lot good I can say about the REQ system. Its campaign serves both casual and hardcore fans well and it’s good to see a return to just that.

a great shooter by its own merits