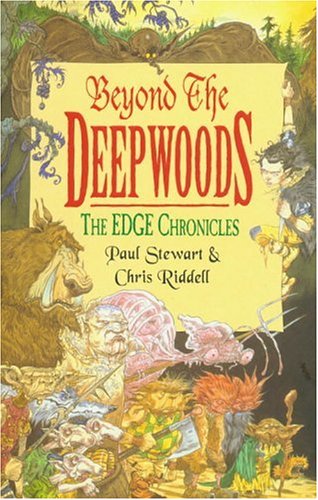 I like lists, I really do. It’s probably no exaggeration that I have lists for everything, so of course I attempted to make a shortlist of what book or series to choose for this piece. I’m not going to lie, it was always going to be a challenge from the very start. My shortlist was most definitely a long shortlist. Me being the big reader that I am, I’ve kinda amassed quite the collection of glorious gems and horrific flops over the years. But I really wanted to find something that maybe deserves, a little more spotlight, or that’s maybe been overshadowed, and give it a bit of love.

So my ReRead pick goes back into my childhood, where on a holiday in Killarney at the age of maybe 10 or 11, my parents set me loose in a bookshop and let me pick a book to buy. You can not even begin to believe how freaking excited I was. I still remember that day vividly. I’ve always been allured by the escapism of a good fantasy book, so I was drawn to those kiddie fantasy shelves, where I discovered a series of novels that really evoked my sense of imagination and wonder and inspired me to start writing. That series being The Edge Chronicles (specifically The Twig Saga trilogy) by Paul Stewart and Chris Riddell. My parents did tell me to pick one book in that bookshop, but again, it’s me, and I’m sure they weren’t too surprised when I came up to the counter with a stack of 4 books from the series. Oops.

There is something to be said about reading books as a child. It’s an age when your imagination is so vibrant and vivid and you’re that little bit more curious about the outside world. It’s also a time in your life where you’re still fairly untarnished by politics and the responsibilities and constraints of adulthood, so looking back on this series in particular gives me the warm fuzzies, of a simpler time.

Enough of my reminiscing, we’re here to talk about The Edge Chronicles. A series set in a land known as The Edge, and a series that has continued to thrive, now consisting of for trilogies and a bunch of standalone books set in the same world. Each series and standalone divided only by the time periods they are set in, spanning nearly 600 years.

The protagonist of the Twig saga is, surprise surprise a young lad called Twig, who was abandoned by his parents and raised by the Woodtrolls, in the Woodtroll village. But one day, Twig breaks the most important Woodtroll rule of all and wanders from the path, which leads him on an incredible journey through the Deepwoods where he encounters a multitude of creatures and characters, which eventually leads to him joining the Sky Pirate crew of the Stormchaser, a Sky Ship captained by Twig’s biological dad. I’m reluctant to spoil too much of the trilogy though, as I think it should be read in order to appreciate the language, humour and captivating storytelling of Stewart and the fantastic illustrations and maps scattered throughout by Ridell. So I can’t recommend it enough as a series that would be perfect for cuddling up before bed, with an oversized hot chocolate and the fluffiest of blankets.

Some interesting recollections that have hit me while looking through it again after maybe 12 years, is how this series would have been first experience of character deaths in books, as the dastardly wig wigs had a habit of killing off characters. A few years later Harry Potter and The Order of The Phoenix came out and J.K. Rowling killed Sirius. Still heartbroken.  Don’t even get me started on Hedwig. Nope. I think death in books aimed at a younger audience can sometimes be seen as a taboo, despite it being a natural part of life. At the time I remember being greatly upset about the death of a Banderbear (I swear, just read the series and these references will make sense).

I think for me one of the most captivating elements of the series and many other fantasy series is the incredible world building. When you’re writing such complex fantasy with so many features and characters and various other series to tie together, there is always a fear that you may just end up bombarding the reader with so much, that they really won’t enjoy it. But Ridell and Stewart handle it perfectly. In particular the natural environment they establish where the creatures were so unusual and unique made envisioning their appearance always a treat as a young kid. Ridell‘s illustrations throughout really capture the peculiarities of them too and at times you even find yourself liking some crazy critters. The landscape too had many usual elements, one of which being the floating rocks growing in The Stone Gardens, upon the biggest of which the city of Sanctaphrax was built – a city that became a place of learning where many librarians and professors and others striving to improve their knowledge dwelled.

I think it’s important to note that despite the book being for a slightly younger age group (yes, I said slightly, shut it!) than I currently am, the series has somewhat of an ageless quality. The environment, the characters the creatures are all so well established in their own book world that despite all the advances in technologies in our world, this series as with many other series offers readers an escape from reality. An adventure told through the eyes of a naive and innocent protagonist and a world that tickles and tantalises every fibre of the imagination. A series that I still to this day hold dear to my heart, and one that I would most definitely recommend to fantasy lovers of any age.

If you’re interested in reading any of The Edge Chronicles books, they are available on Book Depository with free delivery to Ireland.

Are there any books you bought or read as a child that evoke all the feels in you now? Lets have a chat down in the comments!