How the hell am I supposed to review this thing? Honestly, how on earth can anyone possibly talk objectively about what this lumbering monstrosity of a film is when the monsters responsible for its creation clearly never figured that out themselves? Where do I even begin? I’ve clearly abandoned all journalistic integrity trying to write this review, I guess all I can do is tell you what I think and hope it makes sense.

Attack on Titan, or Shingeki no Kyojin, is, for those of you who don’t know, a low-budget Japanese fantasy/action/horror movie loosely connected to an incredibly successful and almost universally acclaimed manga and anime series of the same name, and believe me, ‘loosely connected’ is as charitable as I’m willing to be. Anyone deluded enough to refer to this shambling mishmash of melodrama and mayhem as an adaptation needs to either read the manga or a dictionary.

In the film, humanity have enclosed themselves within a series of walls to defend against mysterious monolithic creatures known as titans, and for centuries these walls have proved surprisingly successful. So surprising in fact, that Haruma Miura, as Eren Jaeger, looks upon the wall getting kicked to shit by a titan with the same generic glacial sadness you imagine he saves for when his ice-cream melts on the beach. Eren’s complacence aside, the first wall is breached and many people get eaten in a sequence that manages to be creepy for reasons that are both intentional (more on that later) and supposedly unintentional as it was during this attack, itself an imitation of the anime’s relentlessly violent first episode, that the first cracks in this adaptation’s facade began to appear.

Whether I like it or not, Shingeki no Kyojin is, at least ostensibly, an adaptation of the manga/anime of the same name, so it’s impossible not to look at it through that lens. Unfortunately, it becomes increasingly unrecognisable the further into that looking glass you go. It’s pretty safe to say that if you’re a fan of either the manga or the anime, this film does not care about you. It cares even less about you than it does about its own characters, setting and plot, which is difficult to believe when you actually watch it.

Many of the changes may appear to be purely cosmetic at first glance, but the deeper truths behind them lurk in the shadows and occasionally reach out from them to slap you in the face. The setting has been changed from Germany to Japan, presumably to bring a sense of realism to the Japanese dialogue in a film where people get eaten by giant carnivorous babies and, as such, the cast are all Japanese except one originally of European origin. It’s a pretty interesting inversion to the usual whitewashing that goes on when America adapts Japan’s material, and just like when America does it, it totally fucks everything up. 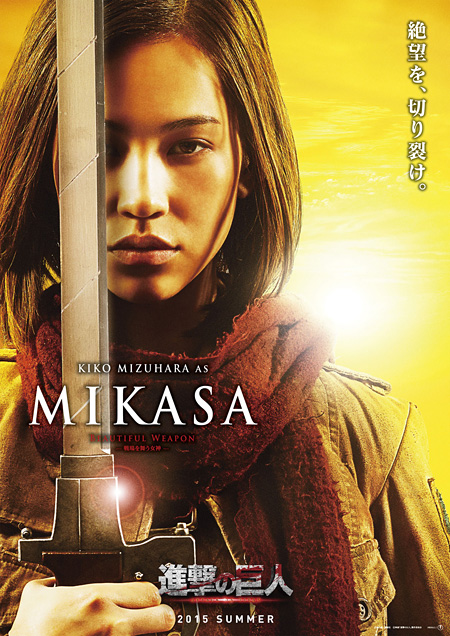 Mikasa Ackerman is one of Shingeki no Kyojin‘s primary characters and, as the last person of Asian descent left in its world, is potentially one of its most interesting. It’s a big part of what makes Mikasa so important; she literally carries the weight of an entire race on her shoulders. To deny that it adds to her drive for survival and her commitment to defending humanity against the titans that decimated her people, to claim that survivors guilt plays absolutely no part in Mikasa’s character development is blatant stupidity. So it’s pretty blatantly stupid to strip her of it completely and put her in a world full of other Asian people. Shingeki no Kyojin was explosively popular all over the world, but particularly in Japan, and don’t underestimate the importance of cultural context here. Japan’s birthrate is famously declining and Japanese people are both very aware of it and bizarrely complacent about it. A story told in a uniquely Japanese medium, entirely in the Japanese language, about a world where only one Japanese person exists among hoards of Europeans, didn’t strike a chord with today’s youth for no reason. Nothing exists in a vacuum except, apparently, Japanese media.

Could Shingeki no Kyojin have existed in 2015 with a European cast? Who knows? We certainly never will. Japan is a strangely xenophobic nation when it comes to their pop culture. There’s a widely held belief that only Japanese people truly understand Japanese media and involving outsiders is generally a bad idea. So the argument that SnK’s hyper-fans would have revolted against a white, or even mixed-race cast, holds a certain amount of water. But should these people be continuously pandered to? A changing media landscape, where anime studios are finally embracing online streaming and mixed-race celebrities are becoming more prevalent in Japanese culture, could have been a perfect home for such a project, but no one on the team had the balls or purse-strings to do it I guess. That said, I find it difficult to believe people on the team were unaware of this tension. In an act of almost beautiful irony, the actress playing Mikasa, Kiko Mizuhara, is actually Korean-American, and the closing credits song is a wholly inappropriate, cringe-inducing, bland-as-balls pop/ hip-hop number from one of Japan’s most popular music acts, Sekai no Owari, sung entirely in English. I can’t help but imagine many gaijin elephants in many rooms.

Realistically, such drastic alterations to setting and cast couldn’t possibly leave the plot unscathed, and it’s here where we have to go into spoiler territory. Fan favourite Levi is cut completely, replaced by some random moustached guy – who, by the way, is introduced in a silhouetted scene in which he looks exactly like Levi – and Eren, instead of seeing his mother eaten before his eyes, kind-of-but-not-really sees-but-doesn’t-actually-see Mikasa get killed, or eaten or something. It’s not clear what happened to her, although it’s kind of mentioned later, but we know it has an effect on Eren because they were frolicking together in a field earlier and he gave her his scarf because she coughed and he’s a nice guy I guess. It’s all so spectacularly rushed and stupid that by the time the titans showed up I was almost happy to see them. Except that I soon realized that I wasn’t, and I’m about to give SnK the only compliment I can give it.

The titans are very well done. The CGI is consistently rubbish throughout, but the titan sequences deliver creepiness and intense discomfort in spades. Their movements are unnerving, their blank expressions are terrifying and watching them feed is even more uncomfortable in live

action than it was in the anime. Fans of body horror will find a lot to like in these sequences, and that’s the most positive thing I can say about it. Oh, and Sasha is in it and she’s pretty funny. There’s that too.

Seeing how spectacularly this film fails as an adaptation, I can’t help but feel like it’s not meant to be one at all. With the sequel due out in less than a month, the manga still in progress and season 2 of the anime a far off distant dream, it’s possible that the filmmakers decided to break entirely from the established canon to do their own thing. That might be okay if their own thing was objectively any good but even ignoring every deviation from the source, Shingeki no Kyojin is just plain bad. The score flits back and forth between romantic pastiche piano and bizarre atonal synth parts, never managing to connect its multiple wayward threads. The lead actors look so lost on screen, so completely undirected and uninterested, that when actors do finally appear who can command some screen presence (Takahiro Miura as Jean and Nanami Sakuraba as Sasha are genuinely good throughout), everyone else looks even more confused. As if they all suddenly realized they were in a film and not some cheap kabuki-cho pantomime.

Originally, the Shingeki no Kyojin live action project was set to be directed by Tetsuya Nakashima, a globally acclaimed, award-winning director and film-maker with a reputation for producing character-driven stories, not to mention heavy experience adapting manga. Instead, we have Shinji Higuchi, a storyboard artist and shock-horror schlock peddler and it’s impossible not to wonder what could have been if Nakashima had stayed on board. Higuchi‘s vision is simultaneously one-dimensional and too scattershot. In trying to cram fast-paced action sequences into a medieval costume drama occasionally punctuated by bursts of gore and visceral body horror, he fails to connect these elements or do them justice individually. In breaking so aggressively from the source, he has driven a wedge between himself and fans of the original. He’s so excited to get the titans on screen, that he doesn’t care who he has to kill, maim or disfigure to get them there. The result is a film where the gaping maw of death isn’t half as scary as how lifelessly everyone is staring into it.

0
0   0
previous Forgotten Childhood: Dennis The Menace (1993)
next Whatever Happened To The Man Of Yesterday? Are Superheroes Old Hat?