The Next Nintendo Direct Mini To Stream This Week

If you’re the type of person who pays attention to anime news, and if you’re reading this you probably are, you might be aware that several of the industry’s biggest names are unhappy with its current state. Schrodinger’s retiree Hayao Miyazaki has said that the industry is in decline and more recently Evangelion creator Hideaki Anno went so far as to say that Taiwan could soon take over as Asia’s animation capital. Both cite a preference among creators and consumers for low-quality, low-concept ‘moé’ shows as the reason for this, which puts people like me, with a love for both styles and just about everything between, in a difficult position.

It’s not that they’re WRONG as such; the amount of harem and magical boy shows that get spat out every season is insane. For every high-concept, narrative-driven show like Evangelion, Shingeki no Kyojin or Madoka Magica, there are ten moé shows that exist purely to sell bishoujo figures and hug-pillows. However, as difficult as it might seem to argue with this point, it’s just as difficult to embrace it in the face of how short-lived many of these shows turn out to be. 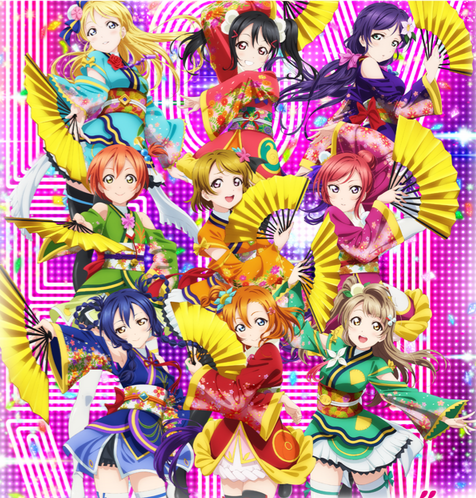 Sure, there’s tonnes of crap out there, but it’s not outshining the good stuff. If anything it’s being swept away by it, and when you have studios like KyoAni taking big risks on feature films for shows that weren’t even that popular, arguing that creativity is being locked down by fanbase demand just doesn’t really work.

Enter Love Live! The School Idol Movie, the long-awaited feature film based on the insanely popular idol anime of the same name. On the surface, Love Live! seems like exactly the type of thing Miyazaki and Anno are railing against; it’s light on narrative, the characters are stereotyped ideals of every otaku fantasy and the movie isn’t a huge step up from its source. It’s ironic then, that by looking beneath the surface, and at the broader context – a fan past-time that basically created Evangelion as we know it today – the argument can be shut down almost entirely.

After the events of season 2, school idol group μ’s (pronounced ‘muse’) are invited to perform in New York to help raise publicity for the next, and potentially biggest Love Live! tournament. Despite having disbanded, they go. Unbeknownst to Honoka and her crew, their performance is live streamed in Japan and upon their return, they discover they are now idol superstars and must make decisions about if and how they should continue their career when their three senior members graduate. It’s a simple but enjoyable plot device, and allows for some hilarious sequences to be juxtaposed against some genuine sentiment. The very fans that Honoka and Umi don’t want to disappoint are also the fans Nico and Nozomi are running away from in oversized sunglasses. It’s another example of Love Live! finding light and shade in the idol world and showing us both sides simultaneously.

That’s not to say Love Live! The School Idol Movie is perfect, or even particularly good. Much like its source, it’s barely more than a slice of life story following the day-to-day lives of its cast of adorable characters. It pulls a generic anime-film trope straight out of the gate by basing its first act in America, and if you’ve seen the K-On! movie or any episode of Kirino Mosaic, you can expect a lot of the same fish-out-of-water humour and Janglish miscommunication gags. The story is sloppily told, really only kicking off well over the halfway mark of the film and Honoka’s internal conflict, although interesting, is triggered by a bizarre deus-ex-machina subplot involving a street performer that almost undermines her struggle entirely by just being really strange. There’s also not nearly enough Nico, but honestly there never could have been. This being a Love Live! movie, naturally music plays an important role in proceedings. There are four major insert songs, including Angelic Angel and Sunny Day Song, both of which reached top ten in the oricon charts by shifting almost 100,000 copies each in the run up to the film’s release. The score is still surprisingly beautiful, with many of Yoshiaki Fujisawa‘s original themes being recalled or referenced throughout the film. The animation is solid, if a little ordinary, and although in terms of presentation Sunrise haven’t exactly made something breathtaking, they’ve definitely captured the spirit of the show.

In fact if I had to sum up Love Live! The School Idol Movie in one word, it would be ‘faithful’. It’s faithful to its source, almost to its detriment, but thankfully not quite. Slice of life shows, although Love Live! doesn’t quite fit in that box, live and die on the quality of their characters, not their plots, and Sunrise have spent two seasons doing a remarkable job making these supposed otaku fantasy models so much more than that. Maki’s hesitance to show off her new composition in the movie stems from her hesitance to embrace the group all the way back in season 1. Nico’s conflict when faced with the realities of fame is particularly upsetting to watch, because we know how badly she’s wanted to be a part of something like μ’s her whole life. The film deals with the real problems and concerns of its characters in such a way that it kind of earns the right to be frivolous at the same time. Just like the original series, the humour and light-heartedness build towards intense emotional conflicts, which in turn become explosions of optimism and relentless joy. Once you’re invested in these characters, and you will be, it’s difficult not to share their positivity and I imagine it would be difficult to leave the cinema without a smile on your face.

Love Live! The School Idol Movie may not be a masterpiece, but it perfectly encapsulates everything that made the show so interesting, and in doing so directly addresses the ‘death of anime’ concept. This is a film that, in the face of an undisciplined narrative, is carried by its characters. The thing is, they pull it off. They carry that sh*t. They carry it all the way home to Akihabara and to a finale that will make you explode internally with happiness and hope for humanity. Anime isn’t dead. It can’t be; not when something like Love Live! The School Idol Movie feels so incredibly, imperfectly and wonderfully alive.

Light on plot, heavy on happiness

Love Live! The School Idol Movie will see limited theatrical release in the USA, New Zealand and Australia in September 2015. There are currently no plans for European screenings.