Review: Kyoukai No Kanata: I'll Be Here (Past)

Review: Kyoukai No Kanata: I'll Be Here (Past)

When is a story worth revisiting? When it fails to deliver on its promises? When there’s more story to tell? More money to be made? There’s probably no definitive answer to that question, but Japan seems obsessed with finding one all the same. AnoHana, Madoka Magica, and perhaps most famously Evangelion have all gone on to transcend their 12 episode existence in cinemas and this summer will see Attack on Titan join that club with not one, not two, but three films hitting Japanese theaters before the end of the year.

Financially it makes sense; reconfiguring a popular TV anime into a film, or as in most cases, two films, is a lot less work than starting from scratch and names like Attack on Titan are guaranteed to draw big numbers and make big money. Kyoukai no Kanata, however, is not a big name show. Airing alongside Kill la Kill and the latter half of Attack on Titan meant that this supernatural-action-moe-rom-com experiment was mostly ignored. Could I’ll Be Here (Past) really be more than a cash-grab re-edit of the source material? The answer is no. Kyoukai no Kanata: I’ll Be Here (Past) is the first of two films coming this spring and it’s job is to prepare audiences for its sequel, I’ll Be Here (Future) by retelling the story of the original TV anime.

It’s not the first adaptation to take this approach, Madoka Magica stretched its refresher course across two films, but Kyoukai no Kanata, given how few people paid it any attention first time round, probably stood to benefit from it more than most.

Unfortunately, it doesn’t quite work out.

For those of you who don’t know (and statistically speaking that’s probably most of you), Kyoukai no Kanata is the story of Mirai Kuriyama, the last remaining ancestor of a clan who could control and manipulate their blood – in Mirai’s case into the shape of a bad-ass sword. She uses this blood sword to fight Youmu, monsters from a mysterious otherworld who somehow find their way into ours, and also to pursue an equally mysterious agenda involving her fellow student, and Youmu-Human hybrid, Akihito Kanbara. It sounds mad – it is mad – but a lot of what made KnK so special was outside the actual nuts and bolts of the plot and this is where I’ll Be Here (Past) really fails to deliver.

With so much exposition to get through and so much explaining to do, the decision to go non-linear for the film is pretty baffling. I’ll Be Here (Past) jumps around the timeline with reckless abandon. I knew the story going in, and even I found myself scratching my head in confusion as to just where the hell we were at times. It’s not very elegantly told and an opportunity to rectify some of the show’s shortcomings (such as the sudden, inexplicable and wholly ineffective antagonist) is criminally ignored.

This might be forgivable if any of the original humor or strangeness had been retained, but unfortunately that’s not the case. Hiroomi and Mitsuki’s bizarre relationship is alluded to  only briefly and only towards the end. Mirai’s blog isn’t mentioned at all and although Akihitos fetish for girls in glasses still draws a few laughs, I’ll Be Here (Past) just has too much plot to get through in too short a run-time to make room for anything that isn’t essential. Which is a shame, because it’s that extra stuff – the idol group, Mirai having no money, Hiroomi being a pervert to everybody – that carried Kyoukai no Kanata. Without it, the characters aren’t interesting. The story seems soulless. 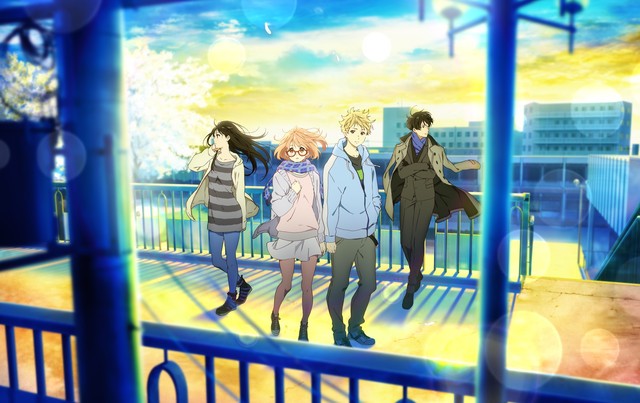 While Kyoukai no Kanata was hugely enjoyable, it’s cop-out ending left a lot of people unsatisfied. It’s interesting to note then that I’ll Be Here (Past) does an almost perfect inversion by justifying itself completely in its final moments. And I mean final; a post-credit sequence turns the original ending completely on its head and sets up I’ll Be Here (Future) wonderfully, but that doesn’t make this one any easier to recommend. Fans will be disappointed by how ruthless KyoAni have been with omissions and as an introduction for newcomers, it’s overly complex and doesn’t represent the show at its best. In the end, I’ll Be Here (Past) does it’s job by whetting appetites for its upcoming sequel. It just doesn’t do very much else.

A story worth revisiting, but not worth watching! 5/10