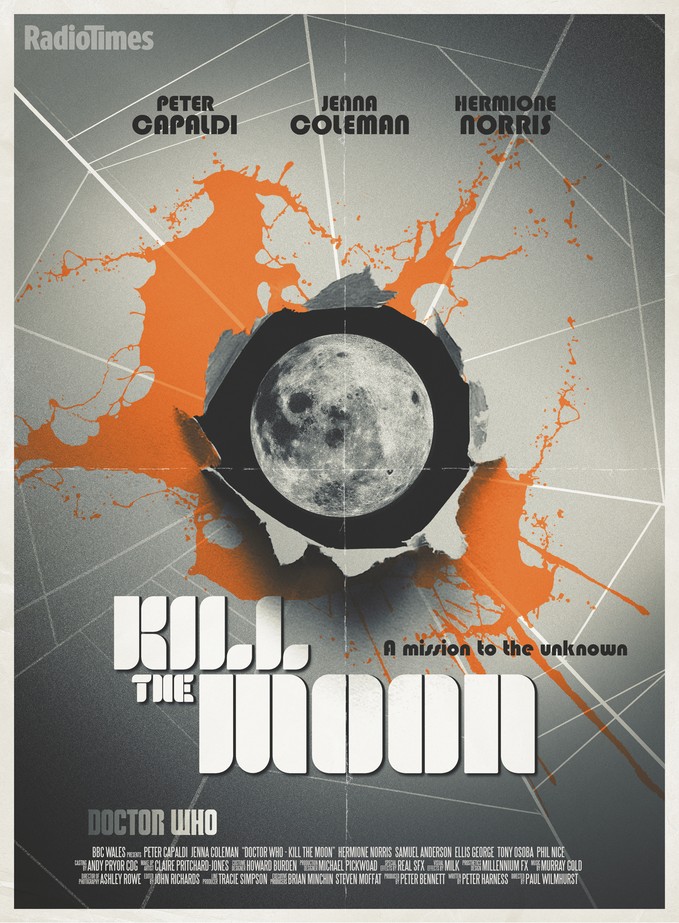 The Moon has been something of a fixture in several prior Doctor Who tales. The Cybermen have built bases upon it for their nefarious deeds in stories like Second Doctor tale‘The Moonbase’ and Sixth Doctor episode ‘Attack of the Cybermen’, it was once said in the Third Doctor era (‘Doctor Who and the Silurians’) that the appearance of our sibling planetoid caused the Silurians to go into hibernation millions of years ago, a hospital once ended up there by way of Judoon interference in Series 3 opener ‘Smith and Jones’, and that’s only a few among dozens of appearances. Now, we find ourselves off on a trip to Earth’s natural satellite once again, in less-than-whimsical circumstances…

On we go, readers. It’s time to ‘Kill the Moon’…maybe. The episode opens showing us what happened after the conclusion of the last one, where we saw the Doctor bringing Coal Hill student/delinquent Courtney Woods on a trip in the TARDIS. Clara is rather irritated with the Doctor on account of him informing Courtney that she isn’t special in any way, claiming that it’s made her act out even more than usual, and seems intent that he fix the situation. Reluctantly agreeing, the Doctor elects to make her the first woman on the Moon by bringing her there, a trip that is somewhat cut short when the TARDIS materialises in the cargo hold of a space shuttle in the year 2049 that happens to be in the process of crashing on their destination. To be more precise, a cargo hold filled with nuclear bombs, something which the Doctor of course finds both intriguing and distasteful. All is not well on the Moon. The gravity’s wrong, there are tectonic shifts, and strange, vicious creatures lurk in the shadows, waiting to strike…and that’s only the beginning of the problems in store.

All of the above comes after a very nicely-done and tense pre-credit sequence that really sets up the episode ahead quite beautifully. ‘Kill the Moon’ is a dark, drama-filled and scary tale, no question about it. While there are Doctor Who‘s typical moments of brevity and humour, the story is overall a very heavy and emotional one, with considerable repercussions on the characters and a lot to think about. It’s a good old moral dilemma that drives this story, set up in the very first few seconds: an innocent life can be ended, or the fate of humanity may change drastically forever (implications that we have seen several times before in Doctor Who, stories like Series 5’s ‘The Beast Below’ springing to mind). There are some incredibly poignant moments in the episode, some scenes that will genuinely make the viewer think, no doubt. It’s very heartfelt, and doesn’t pull its punches, likely leaving the viewer questioning a lot of actions in the story upon watching it, particularly those of the Doctor himself.

On the subject of characterisation, let’s segue nicely into that, as it is a real standout of this story. To put it most simply, this is not a story about the Doctor but rather a story about humanity itself, seen through the eyes of three particular characters in this tale. Clara is naturally the focus of things, and goes through quite a lot in this episode, I must say. She hasn’t quite comfortably settled in with her new Doctor yet, and without saying too much, that situation only worsens as the story goes on, quite dramatically to boot. Clara finds herself with the prospect of making decisions that, quite simply, she knows she shouldn’t have to make. The defining part of the episode is a particular confrontation between the Doctor and Clara that really throws everything we’ve seen between them into sharp relief, and frankly it is a fantastic scene. Meanwhile, Courtney is taking her first real adventure in the TARDIS, and handles herself extremely well, surprisingly. Anyone concerned that this is one of those “annoying teenage sidekick” supporting characters need not worry, she’s a very endearing character who has quite an impact in the events. The third major role in ‘Kill the Moon’ is a human astronaut named Lundvik (Hermione Norris), a very authoritarian and businesslike woman on the surface of things, although we later see several more facets of her character. She acts as a foil to Clara and Courtney, almost, the two separate parties acting against each other in the interest of different goals, and it provides quite an intriguing dynamic.

The Doctor takes a more standoffish role in this episode, at his cold and calculating best. It’s reminiscent of the later Seventh Doctor years, perhaps some bits in the Tenth and Eleventh Doctor eras, but to a very dramatic extent. As ever, on the surface he’s his usual self, making jokes about things even as he’s notably irritated by them, but there are several moments as the story plays out where the audience will likely find themselves feeling less safe than usual, almost as if TV’s greatest Time Lord isn’t as particularly willing to help them as usual. Personally, I loved watching it play out, it’s a real defining episode for the Twelfth Doctor in general, and I’m very much looking forward to seeing the fallout from it.

The performances in this episode are utterly spot-on, perhaps more so than they’ve been thus far (and I say that every week, so they’re clearly stepping up their game constantly)! Capaldi continues to bring more layers to his increasingly-complicated incarnation of the Doctor, really showing off that all we once knew about the Doctor really has to be taken with a pinch of salt now. He’s a more distant, even disconnected personality now, and in this episode more than any other, it shows quite well. Ellis George, after her fairly-large appearance as Courtney in last week’s episode, gets to take her out for a proper spin in this one and certainly does not disappoint. She plays her with just the right kind of attitude, a very realistic teenager in the TARDIS as it were, and I really enjoyed her presence, I’d like to see more of it for sure. Guest star Hermione Norris plays Lundvik with a great deal of gravitas in this tale, certainly a fantastic performance and one that, placed against her character’s opposition in the events of the episode, manage to make the viewer consider both sides of the story’s dilemma well. All above aside, the true standout performance of ‘Kill the Moon’ unambiguously goes to Jenna Coleman. Her acting chops have been noticeably excellent for this entire series thus far, but in this story she utterly blows it out of the park. Clara doesn’t have her usual sardonic streak in this story owing to the circumstances, and Coleman plays that marvellously, a much more serious Clara than we see most of the time. The above-mentioned confrontation between Doctor and companion is a good contender for the single best performance Coleman has given on the show to date, conveying absolutely everything Clara has been dealing with in sublime style. It’s a fantastic episode for her character, and the repercussions will no doubt be huge.

All in all, repercussions are the name of the game here, really. This is an episode with some very heavy themes and concepts, and it handles them beautifully. This is writer Peter Harness’ first foray into Doctor Who, and what a way to debut! It’s an intense story that will leave the audience at the edge of their seats, with some clever reveals, some surprisingly-visceral scares (although, as you all may have noticed by omission above, there’s no real monster to speak of in this tale), and a satisfying payoff with a great way of bringing the consequences of decision back into things. ‘Kill the Moon’ is, at least in my opinion, probably the best episode of an already-great series thus far, at least up there with ‘Listen’ and ‘Into the Dalek’.

An utterly fantastic, emotional, and dark tale throughout. 10/10.

Do join us next week, when the Doctor catches up on his phone calls in ‘Mummy on the Orient Express’…