Opinion: Blackface And Cosplay! Is it Wrong?

Opinion: Blackface And Cosplay! Is it Wrong?

While on Facebook earlier today a friend and fellow cosplayer shared a Buzzfeed post surrounding a bit of controversy around a 19 year old German cosplayer who did a cosplay but as part of the cosplay she chose to ‘BlackFace’.

For those of you who do not know what ‘BlackFace’ is it is the act of painting your face black.  Anyone can black face but it tends to be people on the lighter side of the skin colour spectrum, caucasians to be precise. I have written extensively on the issues of gender and race (and always from my own experience) but I’ve decided to try and look at this story from the two sides – the spectators point of view and from a cosplayers point of view.

Just in case many of you are not aware I am a person of colour in other words, black, brown, cocoa etc… you get the picture. As such ‘BlackFace’ has a lot more meaning to me than it would to other people. Historically ‘BlackFace’ was used to make a mockery of people of colour so as such I don’t always look at it from an unbiased point of view.
It was a practice that was both intentionally and unintentionally hurtful. If you want to find more info on it go here . If you are easily offensive click that link with caution.
Personally I do find ‘BlackFace’ offensive because of what it means. If I attended a convention and I saw a cosplayer with ‘BlackFace’ I would be pissed, really and truly pissed. Why? 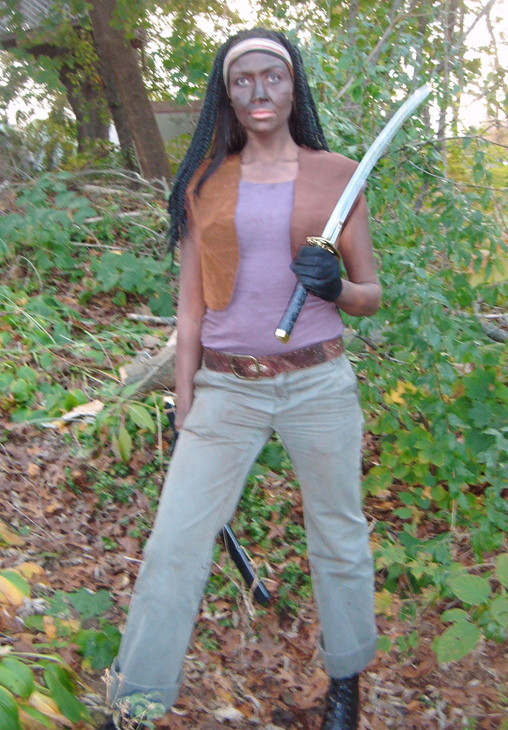 Ignorance is one of the main reasons I have a problem with ‘BlackFace’. You will find people who will swear up and down about how they are not racist, don’t see colour etc. but come Halloween they will ‘BlackFace’ and claim there is nothing wrong.
It’s like being a white American and wearing a Native American Halloween costume especially if you do not have any Native American roots whatsoever. If you think that there is nothing wrong with that, you need to read a little about Native American history.
In an age of knowledge and technology racial insensitivity and ignorance is something of a choice – as children most of us are thought not treat people differently because they look a certain way, not to stare or make a mockery of them. Ultimately ‘BlackFace’ will not be anything other than someone making a mockery of my skin. If you still don’t see a problem with how people reacted towards this young womans cosplay. How would you feel if someone with clearly African facial features slathered some white paint on their face and said they wanted to “portray the character” of Elsa or Jean Grey?
The backlash didn’t just come from other people of colour but from people of all races and cultures. If she had acknowledged how what she did could have been seen as offensive and acknowledged how she made some of her Tumblr followers feel, I’m sure it wouldn’t have escalated in the way it did.
Of course a few people would have continued to poke at the issue but  a majority would have been appeased by such a reaction to their reactions but alas that is not was transpired. She said she did not see what was wrong with it……..*le sigh*. She said it was a tribute to Michonne from AMC’s The Walking Dead and did not see how it was any different from any other makeup tests she has done in the past.
On that note I will start my defense of that cosplayer. Never thought I would say that about someone who ‘BlackFace’d.

As a cosplayer I have done a lot for my cosplays. I have spent money I did not have on fabric, bound my chest for a crossplay, painted my skin and corseted my torso to ridiculous proportions.
All of these things are moderate to extreme measures taken to change your appearance for a cosplay. Its like crossplay. I am sure multiple are offended when they see overly feminine and petite women cosplaying He-Man type characters or grown men covered in body hair wearing Sailor Moon Fukus. Being offended in any of those cases is relevant to how it makes you feel.
Same goes for ‘BlackFace’ but a lot would ask why does ‘BlackFace’ cause such different reactions to body paint.
I actually don’t personally know of any non-fictional race that has skin that is purple, blue, green etc. Therefore anyone can portray these characters without highlighting anothers difference in skintone. ‘BlackFace’ literally only targets a race of people.  See the difference there?
This cosplayer, who seems to have deleted her tumblr page, is a Makeup Artist so there is something there that some people do not take into account and that is skill.
Skill in this case is the main difference as to how these two images scale on the notion of offense or racism. The skill shown by the cosplayer and the dedication shown by her to want to pay tribute to a character she admires should already wipe the notion of racism from people minds when they look at the work she has put into it. Why make so much effort to make a mockery of someone?
Why go through the process of transforming your entire body for the sake of “racism”? Because it is not racism and was never intended to be. The people who made it racist made it such.
Personally I am not sure how comfortable I would be if I was to ‘WhiteFace’ because I am not one to stir the pot so to speak and I’ve never found a character I really want to pay tribute to in that way.
I don’t believe you have to look exactly like a character to cosplay them. Not many of us have anime proportions, video game muscles or flawless physiques but skin is something we all have and if you think it is absolutely necessary to alter your skin for a cosplay to this extent go ahead but there will be backlash. Race can be a touchy subject in the cosplay community with people of colour getting grief about cosplaying characters who are Caucasian or Asian. Maybe this is a way of restoring balance in the cosplay world? But in my honest opinion as a black cosplayer I do not think she is being racist, she is doing what she said she is doing and she does it well.
The time and skill that she put into that cosplay is commendable and she shouldn’t be on the receiving end of such negativity.
In the end you have heard both sides of my opinion and I don’t think I am the only person who feels like this about this entire fiasco. Yes there is a level of sensitivity required when it comes to issues of race, gender, creed and sexuality but sensitivity can drown out common sense too and had people taken the time to gauge both sides of this story, this person then it may not have been this big storm of anger and outcry. Unfortunately I think the damage has been done in this case but I truly hope this doesn’t put this woman off from cosplaying in the future.