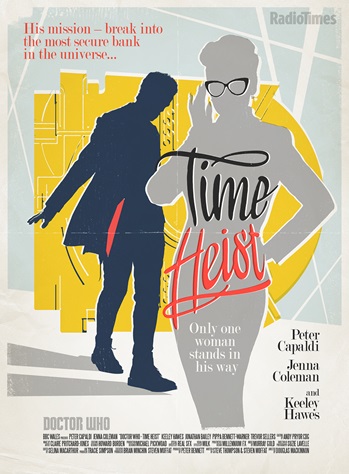 Writers: Steve Thompson, Steven Moffat.
Director: Douglas Mackinnon.
Starring: Peter Capaldi, Jenna Coleman, Keeley Hawes, Jonathan Bailey, Pippa Bennett-Warner.
Heists and the Doctor have something of a long-running relationship. Over the course of his long life, he’s broken into countless military installations and secret bases. He’s stolen priceless artefacts from museums, he’s stolen deadly weapons from even deadlier owners. Indeed, he even began his lengthy career with the theft of an ancient, faulty, out-of-date TARDIS from the scrapyards of Gallifrey. Now, another one looms for the Doctor: a break-in to the biggest and most secure bank in the universe. How does it measure up? Does it manage to steal the audience’s favour, or is this a heist gone sour?
Do read on to find out. This is ‘Time Heist’.
OBLIGATORY WARNING: THERE MIGHT BE MILD SPOILERS.

The episode opens in rather simple style, at least for the first minute or so. The Doctor has popped by to visit Clara, interrupting her in the midst of getting ready for a date, something which the Doctor spectacularly fails to notice. Proceedings are made somewhat more mysterious when the TARDIS phone rings, a phone that very few people in all of space and time know how to reach. The Doctor answers, taking hold of the receiver…before the scene suddenly cuts to a dark room, where the Doctor, Clara, and two strangers are now sitting, in the presence of a memory worm (last seen in “The Snowmen”) that has wiped all recollections of recent happenings for them. Before anyone can figure out what’s happening, they’re informed by a mysterious figure calling himself “the Architect” that they are about to break into and rob the Bank of Karabraxos, an entire planet devoted to banking for the wealthiest people in the universe. What’s more, they’ve already agreed to do it, as the Architect proves with their own recorded consent. The Doctor is none too pleased at this development, but intrigued all the same as to why he wouldn’t have agreed, and begins to lead his ragtag bunch of misfits into an incredible heist, one fraught with peril and danger…
It’s a very hectic, fast-paced beginning, and the story continues in that vein throughout. “Time Heist” is an action-packed story where there’s constantly several things going on at once. It’s very busy, but manages to largely avoid being overwhelming, which is a difficult thing to balance when it comes to tales like this. It’s unashamedly patterned after the likes of Ocean’s Eleven or similar big-heist movies (as well as a fair few similarities to the Big Finish audio play “Glory Days” starring former companion Bernice Summerfield), and the episode enthusiastically revels in that, playing up all the usual tropes with flair and style, whether through the intense and quick-moving script, or the flashy, rapid scene transitions and visual feel brought to the episode by the crew. The story’s full of twists, to boot, and I found that it was genuinely able to keep me guessing throughout, always fun when watching a Doctor Who episode. While I won’t go into details about it for fear of spoiling it, the resolution of the episode falls into place very nicely, every little element falls into place neatly. It’s a tightly-written and satisfying story, even if it does feel slightly too quick at certain points.
Series Eight has thus far been rather aesthetically beautiful indeed, and “Time Heist” continues that trend with aplomb. The Bank of Karabraxos is a gorgeously-realised setting, and both writers and crew clearly took some time to lay down the good foundation of a real, living world. The architecture and set design of the bank is extremely well-done, whether you’re looking at the opulent and stunning lobby or the foreboding corridors and vaults of the bank below. One thing I noted in particular was the fashion sported by the bank’s wealthy customers, which, while varied as one would expect, all looked quite fitting. The main monster of the episode, the fearsome “Teller”, is a real highlight, constructed not from CGI but rather a suit that certainly ranks among the best of the modern series.
Speaking of monsters and villains, we should get on to the characters of the episode, another good treat. Any heist story needs a suitable cast of supporting characters, and this episode brings them in force. Aside from the Doctor and Clara, of course, we have the other two members of the impromptu robbery group (granted the off-hand moniker of Team Not-Dead by the Doctor). Psi, played by Jonathan Bailey, is a human whose brain has been augmented with quite a bit of hardware, essentially making him a walking computer, appropriate given his nature as a hacker. He’s quite confrontational throughout the episode, but his gradually-revealed backstory brings him a lot of sympathy. Meanwhile, Saibra, played by Pippa Bennett-Warner, is a mutant human who spontaneously shapeshifts into any organic flesh she touches, a power she’s most uncomfortable with due to the fact that she can’t control it, essentially isolating her from most contact with other beings. Both Psi and Saibra’s unique abilities come in very handy over the course of the episode in rather clever ways, and they make up a very interesting cast of secondary characters. The villain of the piece is Ms. Delphox, played (fantastically, I must add) by Keeley Hawes, the bank head of security reporting to her mysterious superior, President Karabraxos. Ms. Delphox is cold, ruthless, and very suave about it, a classic villain through and through. Her monstrous assistant, the aforementioned Teller, is a terrifying and powerful beast with immense screen presence. It’s quiet and very intimidating, and the displays of power it gives off are suitably awe-inspiring. Nonetheless, it has a rather interesting backstory, and there’s more to this monster than one would think…

The acting is, as ever, well above par, with particular consideration given to Peter Capaldi’s performance (much like every week, naturally), showing off his Doctor’s personality more and more with each episode. He plays out the events of this episode with a certain amusing resignation. He doesn’t particularly want to be robbing the bank at this exact moment, but he knows that he did want to at some point, and therefore he’s intrigued enough to go through with it. The Doctor takes command of the group quite effortlessly, and we see a small fraction of just how calculating he can be when it comes to plans. There are a few great one-liners throughout the story, of course, as befitting a big heist tale, and all of them come from the Doctor himself. Jenna Coleman didn’t have a lot to do this week, that said, as the focus was primarily on the Doctor and his newly-found duo of thievery associates, but that’s no bad thing, it doesn’t detract from the story at all. There wasn’t a huge amount of interaction between the Doctor and Clara, which makes a fair amount of sense, given their still-deteriorating relationship.
All in all, “Time Heist” was an exciting and fun standalone story, that’s pretty much all there is to it. It’s got no real connection to the overall arc of the series (in so far as I can tell, anyway), but it’s a great story in its own right, something of a one-shot. An excellent example of doing a story where the Doctor is just as confused as the audience, and the plot gradually develops for both in unison.

An excellent high-octane celebration of the heist movie genre. 8/10.

Do join us next week, when the Doctor goes undercover at a familiar old location, in “The Caretaker”…