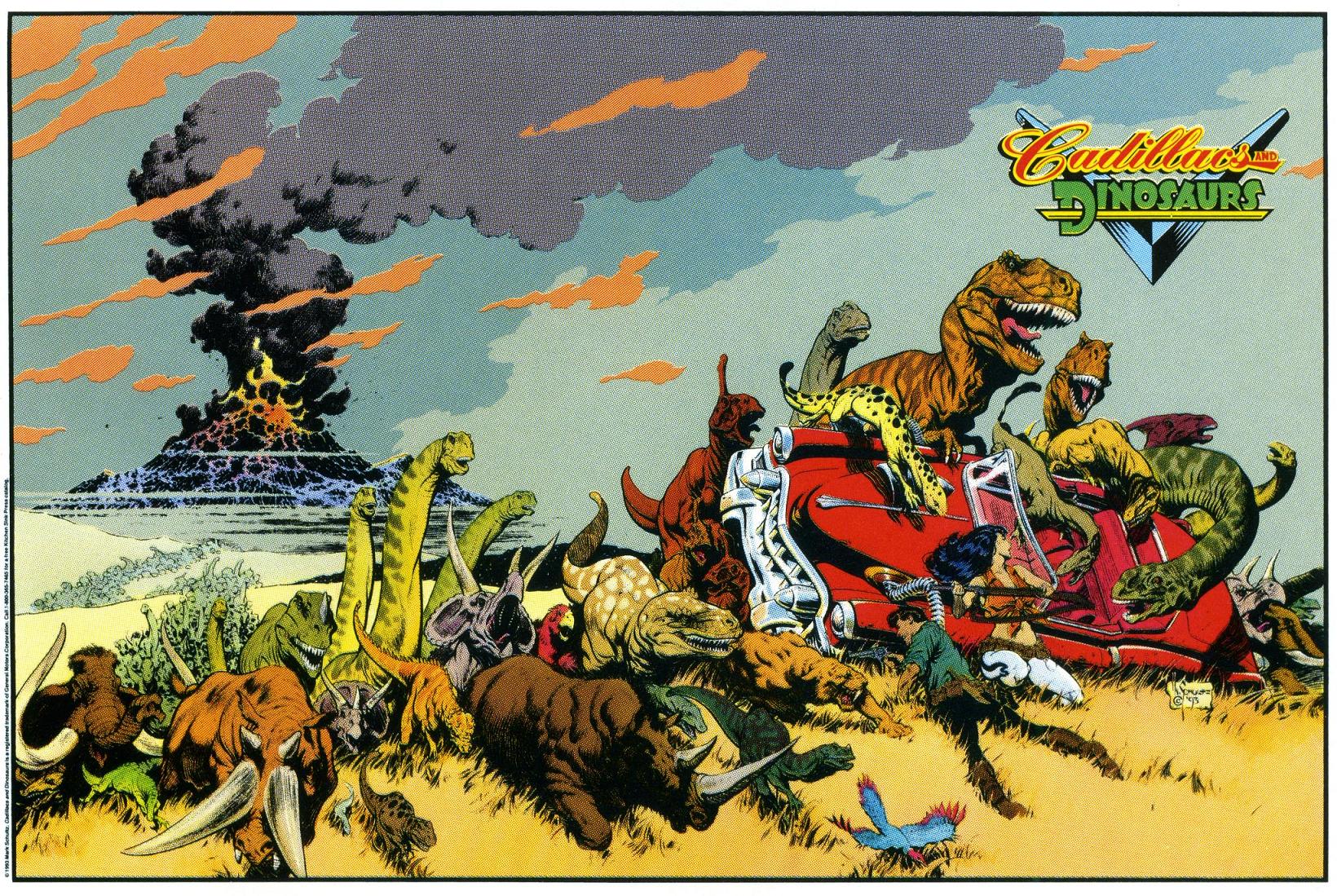 You may or may not remember this Saturday morning cartoon. But I bet you have heard the name before. It’s a title that sticks with you. Say it, Cadillacs and Dinosaurs. If that don’t get you excited then there is something missing in your life. And I would bet it is from never seeing this show. It also has one of the coolest opening credits sequences.

Aired first back in 1993, Cadillacs and Dinosaurs ran for only one season – 13 episodes. It was never considered for renewal but it continued to have a cult following. Hell, I’m still talking about it now. In fact, I’ve been thinking long and hard about who I’d love to see make this into a feature film. Then it occurred to me. There’s really only one person who could do the story justice. And that person is Joss Wheadon. If everyone writes him a letter requesting him to make this his next project, that would be great. Thanks!

Cadillacs and Dinosaurs is set in a world of cadillacs and dinosaurs. But that’s not what the show is about. Actually, no, that’s exactly what the show is about. But there are other things in there too. We have our lead protagonist in the shape of Jack Tenrec, a mechanic from the “old blood”. He’s an environmentally friendly eco-fighter with a love for all creatures big and small. He has a special connection with the land and to a tribe of telepathic lizard creatures known as the Grith. He goes by a special code and is an honourable and noble man. He also has Hermes, a dinosaur he reared from infancy and is now his loyal pet.

Then there’s Hannah Dundee, a feisty ambassador trying to make a clear connection from her land to the modern civilisation. She reluctantly joins Tenrec in his quest to stop the poachers and the corrupt politicians that are only looking out for their own interests. Hannah and Tenrec have a romantic connection from the get go, and can you honestly blame her? I mean, he has it all. He’s caring and sensitive but not afraid to get into a fight, he’s got some sweet rides, and he has a pet dino. How could you resist?

But there’s another lady in Tenrec’s life, and her name is Wilhelmina Scharnhorst. She’s one of those shady politicians who governs the City in the Sea. She will do unspeakable things just to get her way. Scharnhorst and Tenrec are always bumping heads and it pretty much ends with her on the losing end. But she never learns her lesson.

I really enjoy this show and I cannot recommend it enough if you haven’t watched it already. The animation is great, especially for the early 90’s. And the voice acting is such a treat to listen to. I’d always get something new from each viewing. It had so much potential. It was rich with stories. I could have seen it lasting eight seasons, easy. They barely touched the surface. I even had a theory of my own and hoped one day, that if it ever got renewed, they’d go in this direction.

Cadillacs and Dinosaurs was aired in 1993. What other major dinosaur movie came out in 1993? That’s right, Jurassic Park. I think you know where I’m going with this. The show never explaines how the dinosaurs came back. We’re told it’s the 26th Century and nature has gone wild. But we’re never told how dinosaurs became un-extinct. What if InGen, the only corporation in the world to produce living, breathing dinosaurs, was responsible for Cadillacs and Dinosaurs? I know, mind blown.

But we’ll probably never get to see a Jurassic Park / Cadillacs and Dinosaurs crossover… Unless we all write to Joss Whedon!