Splinter Cell Is Coming To Netflix With Anime Adaptation 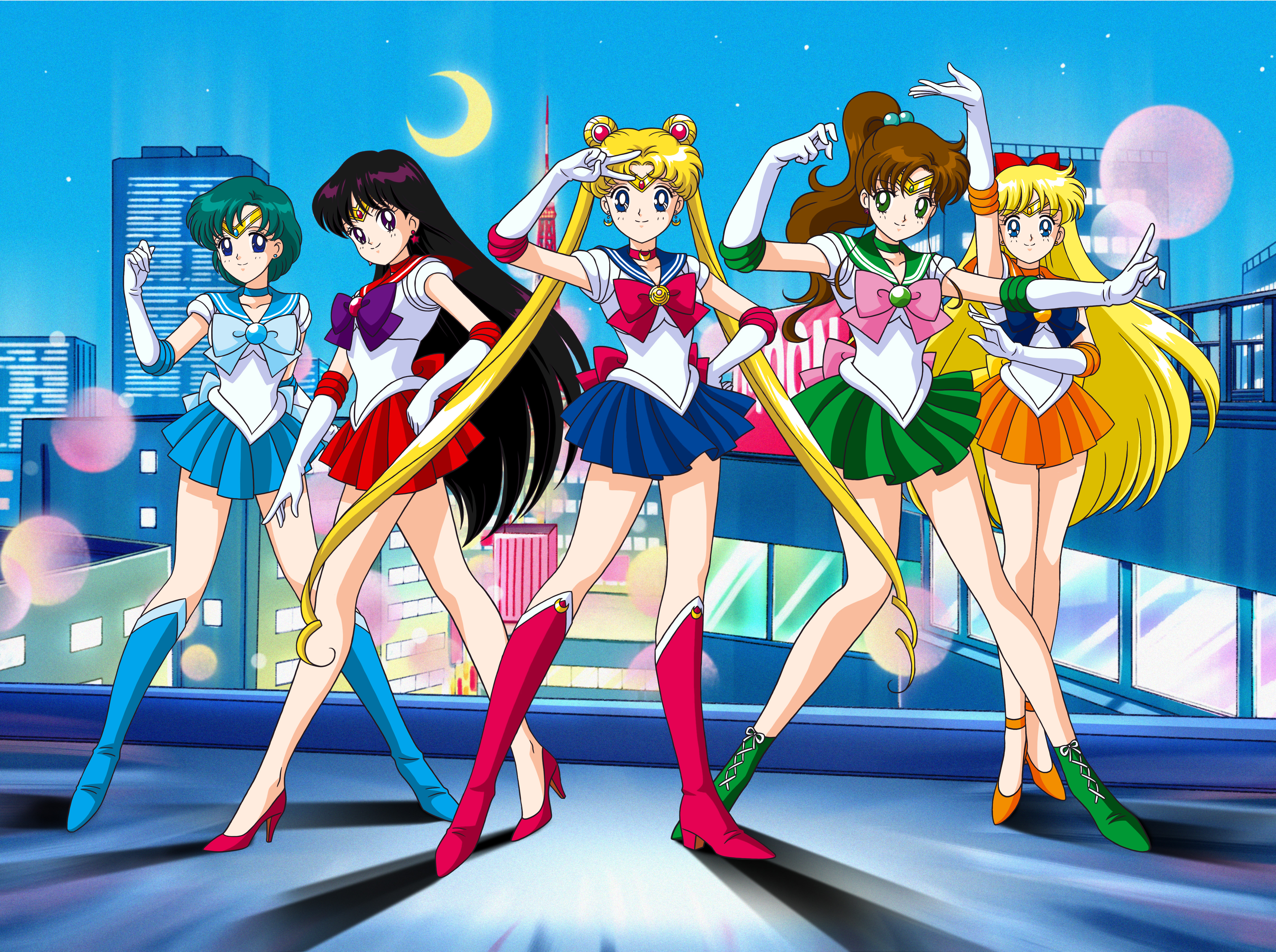 With the long anticipated Sailor Moon reboot about to air, avid fans are rewatching, rereading and reliving the joy that the original series gave them in their adolescence. The reboot will see the original design and story from the manga adapted into an anime series thus giving a whole new generation a chance to enjoy the wonder and magic that is Sailor Moon. Up until the reboot airs we here at The Arcade will be dedicating the time to the original Sailor Moon with countdowns, in-depth look at the original anime and manga and even a cheat sheet.

Sailor Moon, much like most other anime in the magical girl genre, comes in abundance with the same, magic, happiness, ditzy, hilariously clumsy girls with talking animal companions and dazzling transformations. These are not special traits when it comes to magical girl anime but what compliments these traits, and make the series what it is, is the villains. Sailor Moon is no different; this series came with some of the best villains to ever hit our screens from completely evil to idiotic and mundane. Here I list my top ten Sailor Moon villains *Disclaimer: These are MY top ten villains from Sailor Moon*

The only reason this guy is really on this list is the fact that he was chased by planes and still didn’t die. His main mission in the original series is to collect life energy for the Negaverse of whom he serves as part of the Dark Kingdom. He comes off as quite sexist towards women and feels himself above them.

Jadeite focuses on taking the energy from large groups of people usually using different social ruses to do it. The one that stuck with me was the fitness episode where Jadeite runs a fitness centre where young women can exercise then take a break in a “relaxation capsule”. It was such a simple way of delivering a powerful message to young girls while also being a “plausible plan” for taking energy. Jadeite also had one of the more “exciting” exits from the show after luring the scouts to an airport but in good anime fashion the plan backfires and he ends up being chased by planes and even though he does escape this he is sentenced to “Eternal Sleep” by Queen Beryl.

was portrayed to be a woman and a catty woman at that was actually a man in the original Japanese (HORROR SHOCK).

Zoisite is perceived as the most cunning of Queen Beryl’s henchmen in the way he manoeuvres his “companions” where he goads and aims for their failure and demise even though they are in the long run aiming for and fighting for the same thing. He even goes as far as to kill one of them in order for himself to get ahead but ends up being destroyed through his selfishness.

No. 8 Queen Beryl & The Negaverse

Unfortunately the anime adaptations do not dive into the complexity that was Queen Beryl’s origin story, where the term “A woman scorned” has never rained more true. Keeping with the anime Queen Beryl rules all the Negaverse in her own name without mention of Metaria. Her motivations are unclear where her only real aim is to enslave the entire universe or even destroy it. Apart from this she has a major beef with Queen Serenity and the Moon Kingdom which other than the fact that the Moon Kingdom was at peace is not explained, hence why a look into her backstory would have come in handy.

Queen Beryl although lacking clear motivation is one of the Sailor Scouts toughest enemies along with her army of henchmen and demons to do her bidding.

These girls are a part of the Black Moon Clan and are the underlings of Rubeus. Where in the manga these girls are seen as the first line of offense in the future and are sent back as the best match for the Sailor Senshi of the past. Although in the anime adaptation these girls are made out as shallow self-obsessed whiny women. Who care more about their beauty while splurging on clothes, cosmetics, jewellery and other vanity products while bickering constantly between themselves. These girls may not seem like the most formidable of opponents but they received so much airtime as villains they deserves their spot with Rubeus on this list.

Crimson Rubeus or simply Rubeus in the dub is the first of the Black Moon Clan to arrive in the past. He is loyal to

his Prince Diamond and while the Negamoon sisters are all infatuated with him he uses this to his advantage and uses them as his pawns in his attempts at capturing Chibiusa which in the end leads to his inevitable downfall and death.

Prince Diamond’s origin differs in both manga and anime but as he is better known by his anime self I am sticking with that. His past here is that of being deemed a criminal as he was descended from criminals. He is manipulated by the Wiseman into seeking revenge on Crystal Tokyo and Neo Queen Serenity of whom he has fallen in love with.

Prince Diamond’s main claim to fame in this series however is his epic creep factor where he recognises the future Queen Serenity when he visits the past, kidnaps her and dresses her the way he wants her in order for him to have his “love”. Although his creep factor is overwhelming he does redeem himself before he bites the dust by asking for forgiveness from the one person who he as hurt the most Queen Serenity (even if it was her past self)

Even though it seems like the main antagonists of the Sailor Moon R are Prince Diamond, Rubeus and the Negamoon Sisters the Wiseman was always in the background

pulling all the strings like a chaotic puppet master. He manipulates them to do his will against Crystal Tokyo while not giving much concern to their own safety which is evident in his lack of interest in the death of Rubeus.

He has no boundaries in whom or what he will use in his mission to take down and destroy Crystal Tokyo. He goes as far as to manipulate and alter Chibiusa’s childhood memories in order to transform her into Wicked Lady.

They are a part of the Dead Moon Circus and loyal followers of Zirconia. Their main objective is to search through the dreams of mortals using dream mirrors in order to find the legendary Pegasus. He holds the golden crystal which can free their Queen Nehelenia from a mirror for her to take over the world.

As individuals they have their own specific mannerisms and personalities. Tiger’s eye is a ladies man and his targets are usually younger woman who he can seduce and attract into his traps in his search for Pegasus.

Hawk’s Eye is perceived as the most outlandish of the trio; often getting into arguments with Tiger’s Eye as he is almost the opposite of him with attracting older woman into his traps.

Fisheye is another character that made the gender change from male to female in the dub of the anime. The original feminine look of the character called for the apparent change. While this change may have come from the fact he attracts young men (although being heterosexual in the manga. Make up your mind people!)

Nehelenia’s backstory in the anime in quite tragic making the viewer almost empathise with her. She is seen as a ruler of her own kingdom and adored by all but has been

made reclusive and had no real friends. She learned to love herself which leads her to become vain and obsessed with staying young and beautiful after seeing herself as an old hag in an enchanted mirror.

Her motivations even over her vanity are clear; she wishes to obtain the golden crystal in order to give her ultimate power to be the most powerful being in the universe of which she will then rule unopposed. Her clear motivation and drive cause her to be one of the most fierce of the villains the Sailor Scouts must face, even getting herself to be a villain as part of two seasons of the show. From her backstory to her imprisonment Nehelenia overcomes all that face her and is a fierce opponent who is not to be taken lightly.

Mistress 9 for me stands out as the most “evil” on this list. I do realise that there are villains in the series that have done worse things than Mistress 9 but the thing that stuck out to me about her is that fact that she has no remorse what so ever. Although Professor Tomoe initially allows Mistress 9 to possess and become a host in his daughter but she proceeds to use Hotaru’s body to do her will bidding, where the other Sailor Senshi fear the awakening of Sailor Saturn Mistress 9 takes control revealing her true self.

Mistress 9’s actions firmly land her in the number two slot. She has no regard for anyone’s life except her own. She uses her Daimons to do her bidding through the ruse of Professor Tomoe and the Witches 5 (both of whom barely missed being on this list) She kills off her underlings in order for her to get ahead. Mistress 9 is a woman you never want to cross.

An honourable mention has to be given out to the “most powerful” Sailor Scout in the Universe (name kind of gives it away). She is another “villain” whose back story only

makes you think of her in a more sympathetic way. During the war she sealed “Chaos” within herself to end it. Slowly over the passage of time “Chaos” slowly grows in power from within Galaxia and begins to influence her into wanting to rule the universe in the name of “Star Galaxia”

What makes Galaxia different to most villains is that she was original one of the “good guys” her transition into darkness was the result of her own personal sacrifice to save the lives of everyone in the universe. Although as her chaos self she commits many the heinous acts there is still that glimmer of hope for her soul and her true nature before chaos.

Wicked Lady is the creation of the Wiseman who warps a lonely Chibiusa’s memories of her family and friends making her feel like her parents never wanted her, in order to do his bidding. After being brainwashed and infected by the black crystal she morphs into the older Chibiusa in other words Wicked Lady. Her main motivation in the anime is through her hatred of her family and the Sailor Scouts and her want to kill them because of her feelings of abandonment and being unloved.

She takes the number one spot for the fact she is the unlikely villain and her pieces as Wicked Lady kept fans on the edge of their seats in hope that we would see her saved or with the fear that she would have to be destroyed. Her effect was long lasting and although there were major differences between her in the manga and the anime her effect was the same. Wicked Lady will always be my number one villains.

Villains come and go but these guys will stay with you forever. Now go fight some evil by moonlight while we wait for some rebooted villains to come our way!