Browncoats and Alliance blue-bellies alike unite, ’cause we’re gonna play a little game. Dust off your…dusters and get ready for some shootin’, ’cause you got some flyin’ to do.

This is likely what you will be talking like for the duration of any given session of this fantastic board game. Yes, we’re talking Gale Force Nine’s Firefly: The Game, the board game that managed to do the impossible, and almost exactly replicate the unique feel of Joss Whedon’s sci-fi-western masterpiece on cardboard. If you haven’t watched / aren’t aware of Firefly, first things first: do that. It’s only tangentially relevant to the actual game, but it will make your life at least 70% better, and it’ll make playing the board game just that little bit sweeter.

Let’s talk play. First, you may have noticed that, in the opening sentence of this review, I referred to Firefly as a “little game”. This is a bold-faced lie. As board games go, it is positively enormous. The board itself is a hefty (not to mention extremely well-illustrated) depiction of the local sector of space that makes up Firefly‘s ‘Verse, but that’s just the start. Deck upon deck of cards fill the box, representing various things from items to purchase throughout the game, crew members, and jobs that a player can take on. Several player pieces, taking the form of variously-coloured Firefly-class ships, as well as pieces representing both a Reaver vessel and the ubiquitous Alliance flying city block.

It’s an explosion of stuff right away, and that’s something that I personally really enjoy in a board game. Set-up with this game will take several minutes, simply due to the sheer amount of stuff that there is, but that’s part of its charm. Right away, you know this game is going to be thorough.

In brief, play begins by choosing one’s ship and captain. The choice of ships is ultimately redundant, given that the four included in the game box are identical, not that such a thing would stop anyone going for Serenity first try, of course! That said, there’s a good chance that, if you’re picking up the game, you’ll likely be getting the expanded set, which includes an additional ship, the Artful Dodger, which is slightly faster but with less cargo space. These two are the key ship attributes. Each ship comes with a set amount of cargo space, used to hold fuel cells, spare parts, and transported goods.

The captains are a much more varied lot. Each captain has their own set of skills and attributes (skills chiefly taking three forms, that being Combat, Tech, and Social, each governing exactly what they sound like). For example, Mal himself obviously leans on the side of Combat, being a hardened soldier, while someone like Nandi would lean more on the side of Social, as a trained Companion. Ultimately, however, the choice of captain is still largely down to whatever the player has a preference for, as any skills they lack will be accounted for throughout the game by picking up crew. 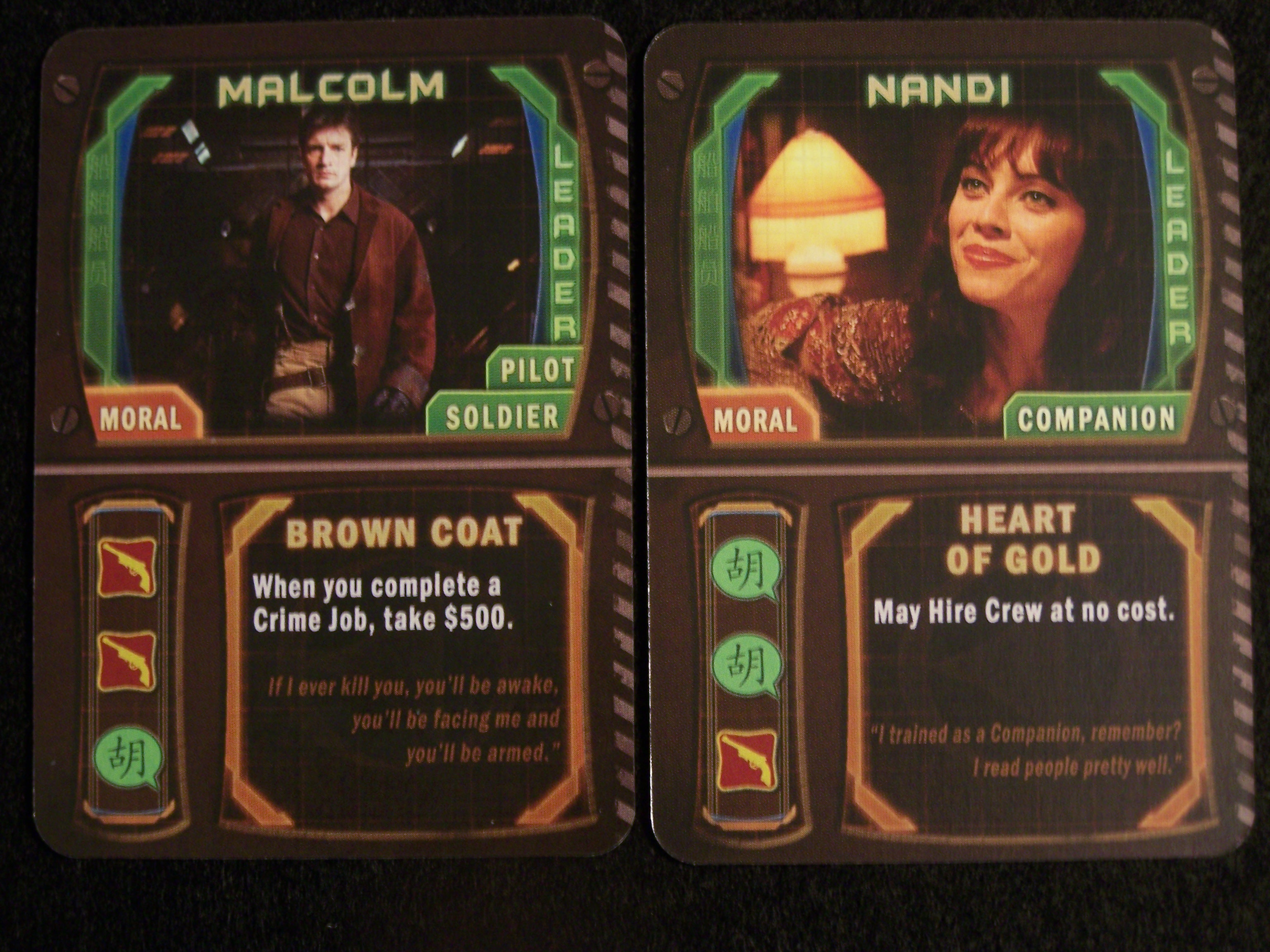 Once the game’s begun, you’ll be moving around the map, heading to planets to either buy new goods (adding bonuses to your skills, via weapons or other technology like hacking tools) or hire new crew (including a lot of famous faces from the show, including all of the Serenity crew as well as other background characters, each of whom comes with a similar profile to your captain). Aside from purchases, certain planets allow you to take on jobs, the driving force of the game. Jobs are taken on from a number of characters, and range from totally legitimate (the Alliance) to a mix of clean and shady (Badger or Patience), right down to all illegal, all the time (Niska). Jobs have a varying payout or reward, generally decided by both the distance of the job’s destination, and the difficulty of the die rolls that may be needed to finish it.

Yes, the travel itself is almost the most dangerous part of this game, fittingly!

You can move one space at a time without penalty, but that is essentially the speed of a snail in a duster as far as this game’s concerned, and the other players will be whizzing about you. Going “full burn” allows you to move anywhere between 4-6 spaces at once, depending on your ship configuration at that time, but comes with its own deck of random events that can happen to you in the course of it, whether it be a ship breakdown, boarding action by the Alliance (if your ship has even a touch of the illegal about it) or, worst-case scenario, attack by Reavers (you do not want this, trust me on that). As such, there’s a nice risk/reward problem in play, risky travel potentially bringing great riches.

That pretty much sums up gameplay, as far as it goes. You zip about, get into trouble, put together a crew of miscreants (who will rebel if they don’t get paid, and can be injured, even killed), build up your little power base, add parts to your ship, get money, possibly lose money. There are several ending conditions for the game, such as finishing a certain mission or obtaining a certain amount of money, it all depends on what mission you’re playing.

While it might not be absolutely perfect, having a couple of brief problems with pacing in the end-game and perhaps a slightly off-kilter difficulty curve, all in all, I can’t recommend Firefly: The Game enough. If you’re not a Firefly fan, you’ll probably still enjoy the game, it’s engaging and has a touch of RPG-elements to it that makes the experience all the richer. If you are a Firefly fan, then you’ve probably already bought it as soon as you heard of it, and if not, do so. It’s a Big Damn Board Game, and my word, it’s one of the shiniest I’ve played.

If you want to pick up your own copy of Firefly – The Board Game then the Arcade recommends you check out BoardGamer.ie

0
0   0
previous Marvel's Netflix projects are part of the Cinematic Universe
next Calling all Writers!