Home Games At A Glance: Teslagrad

At A Glance: Teslagrad

At A Glance: Teslagrad

Welcome to “At a Glance”, where first impressions of a title mean everything! This week we are looking at something a little different, ladies, gentlemen and young electrical engineers, I present to you Teslagrad.

The last few years have been good to us Puzzle platformer fans, with the massive influx of them coming from the indie scene last year. While we had Braid starting the entire thing off we have many interesting ones like “The Bridge” and “FEZ” changing exactly how we deal with puzzles and jumping in mind boggling way. While many people got tired of these games, I always loved my time with them and holds to be one of my favourite genres. Today we are looking at another game in this fantastic line of games in the Genre and its called Teslagrad. Teslagrad tells the story of a young boy who is thrown into a world of magic, science, kings, wizards, revenge, treachery and friendship. The game takes place in a strange steam punk inspired version of early Europe(think Russia but with gears). The entire story is told through  the world, no voice acting, no text, it is done with visual storytelling and that is one of the more interesting parts of the game and we haven’t even gotten into the puzzles yet.

The game tells the story of a young boy, who’s father leaves when he is very young. His father was a inventor, working with strange sciences, which you learn more about over time. Times passes and a King takes rule over the land and the boy is suddenly a convict. The secret police chase after him but he escapes to the old Tesla-tower in the centre of the city.

Here you explore the many floors, solving puzzles, gaining items and finding out what exactly is going on. As I have already said, the games story is told entirely through imagery, no dialogue at all. Knowing that it’s a very impressive feat; telling such an interesting and complex tale, heck it’s a better story than a lot of the others told in the AAA industry today.
Imagery is the main force behind understanding what’s going on, from propaganda to wall murals, the game is full of interesting and beautiful pieces of art that serve a purpose to the plot, which is a fantastic well to tell a story. Hell even the achievements are small tarot cards with individual drawings of the story as it progresses, which is a very  rewarding way to use achievements.

Gameplay is where things start to get difficult though. On paper the game is a 2-D puzzle platformer, but it also shows slight signs of being a Metroid-Vania. While you do receive new items and certain floors aren’t open until you receive them, the game never forces you back to areas already cleared, so in that sense it is not a Metroid-Vania. The main gameplay mechanic of the game is the manipulation of magnets. Like real world magnets, there is a positive and negative charge and are represented by colour, red and blue. A example of a puzzle is that early in the game you receive a glove that can change blocks to a different colour magnet. The floor is made of red magnet boards, so you turn a unused block into a blue magnet block and you are pushed up. Sounds easy enough, but the game gets very difficult, especially towards the end of the game. The use of magnets gets very difficult later on, adding magnetic beams of light, robots and a lot of interesting uses for gravity. 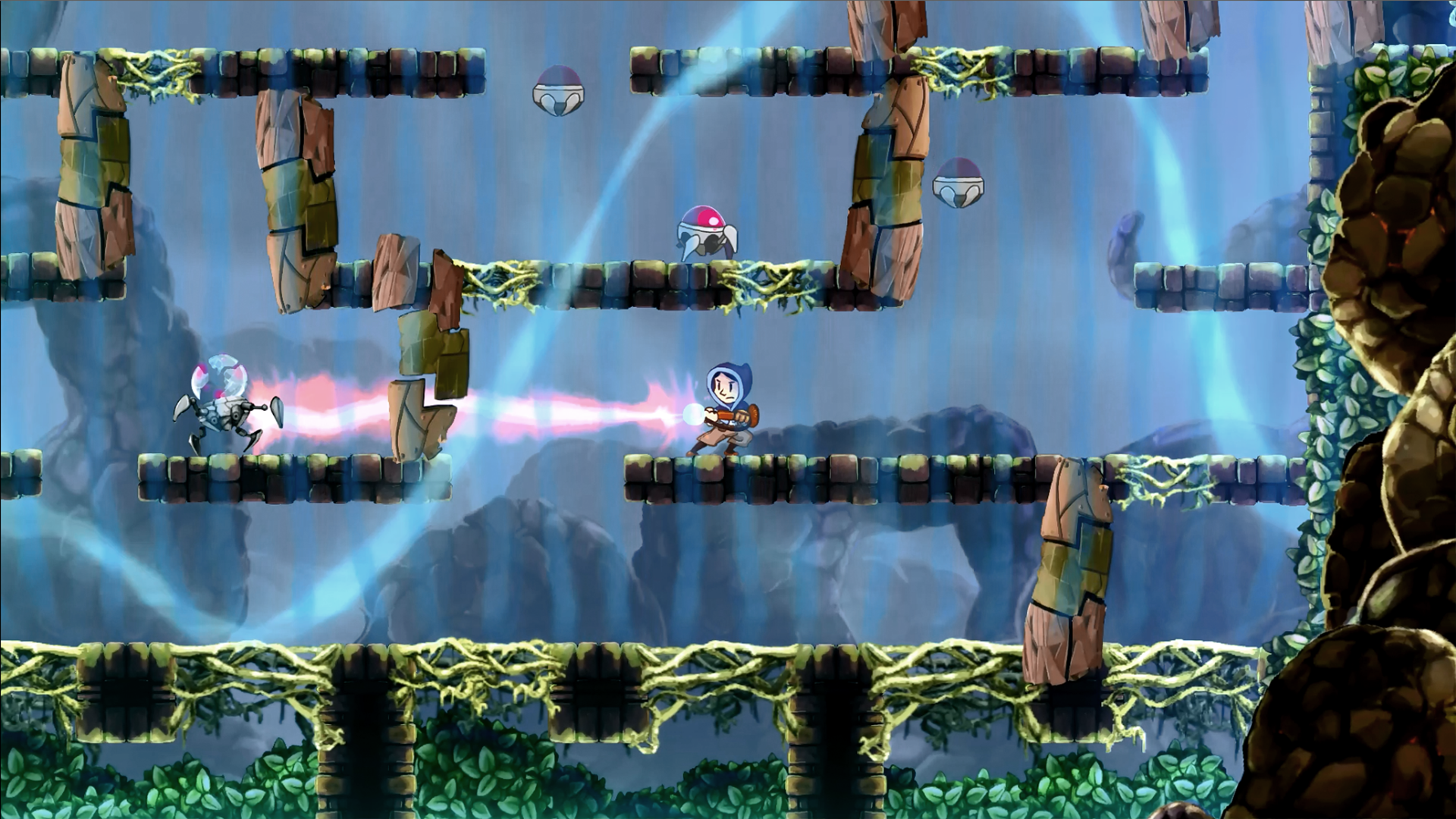 As I mentioned before, you receive items as you progress through the tower. These items range from a glove that allows you to switch magnet powers to a clock that allows you to generate a aura of magnetism around you. The item progression is actually quite interesting, as you get each item exactly at the time you need it and there is never a tutorial, the level design teaches you how to use them, which is fantastic. Also I noticed that the more items you get, the more you start to look like your father, so it’s an interesting little Mega Man X item progression, the more you play, the more you look like a hero.

Of course what would any indie Puzzle Platformer/Metroid-Vania be like without boss fights. Yes that’s right, the game features a number of boss fights, each showing you exactly how you use your brand new item. These fights ranged from as normal as a large robot that can eat you in seconds to a mechanic bird powered by lighting. 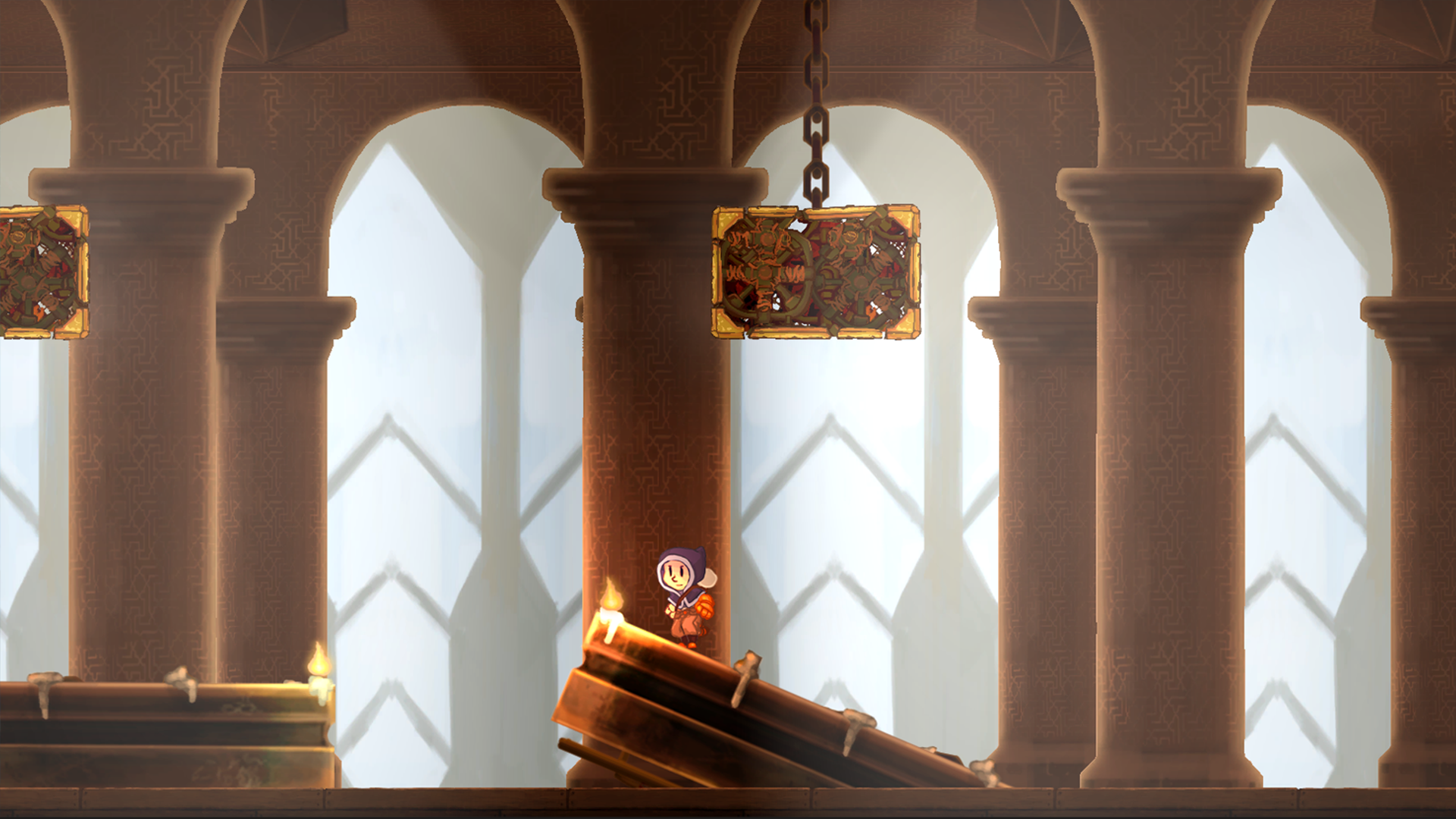 Already you should have noticed that the game looks gorgeous. The early Europe setting gives perfectly to the amazing hand drawn style of the game, with very detailed character models and backgrounds, the entire thing just oozes charm. The art style reminds me of a early Disney/Hergé animation and really is something to experience. The soundtrack also is quite nice, with a range of atmospheric melodies that work perfectly with the level design. The music really does give a sense of calm during the tougher puzzles, but can be big and dramatic during frantic boss fights. All in all the visuals and soundtrack are really something and work in a lovely harmony together to produce a very mysterious yet serene atmosphere.

Really by now you know that I am going to recommend Teslagrad. While in some ways I am a little biased because I love puzzle platformers and I am sucker for anything based in early European time periods, I also know what makes a puzzle platformer good. The puzzles are interesting and challenging and not unfair.
The game moves at a slow pace, which suites the calm, mysterious mood the game is portraying, but can be quite tense(especially when the blink boots come into the game). The game is so full of charming points, from the character designs to the soundtrack, everything just sets a feeling of a big adventure on a child against a evil tyrant. While some people are sick of the puzzle platformer genre, I just think it keeps giving us more and more interesting and unique experiences and Teslagrad is without a doubt on that list.

You can find out more about the game over at the official website! You can purchase Teslagrad on Steam, GOG or Desura and is coming to Wii U and PlayStation 3 soon!