Home Anime/Cartoons Evangelion 3.0: You Can (Not) Keep Up

This post not only assumes you have a decent grasp on the Evangelion Universe but also spoils it in spectacular fashion. Continue at your own risk.

Neon Genesis Evangelion is something you either get or you don’t. It’s monolithic presence looms over its entire genre and its infamous legacy has assured that even the greenest of anime fans will at least have heard the name. Originally aired in 26 episodes the story has been re-told with an alternate ending in two subsequent feature films (Death/Rebirth & End of Evangelion) and a third re-telling, in the form of four new films, has just reached breaking point with the release of Evangelion 3.0: You Can (Not) Redo, the third movement in series creator Hideaki Annos new quartet, tentatively titled Rebuild of Evangelion. If you’re still with me, chances are you’re an eva fan.

Evangelion 3.0 has divided this already divided fanbase straight down the middle. For a series renowned for being confusing and obtuse, fans knew Hideki Anno would have to pull some seriously batshit stuff to maintain the sinister mystique the franchise had always enjoyed and having watched Eva 3.0 myself over the weekend, I can confirm he was up to the task.

But before we get into this analysis proper, some housekeeping must be taken care of. Firstly, if you’re unfamiliar with the world of Evangelion you just should not be here. Mainly because it’s literally impossible to discuss the series without going into spoilerific detail but also because Eva has reached a kind of narrative singularity over the years; it’s a series that seems to continuously reward you the more time you put into it and if you’ve managed to avoid it for the last 18 years (yep you read correctly, folks) I’m not convinced it’s reasonable to ask you to start now. That’s an awful lot of ground to cover and while some would suggest starting with the Rebuild movies, originally billed as (and still believed by many to be), slightly more accessible doorways into the world, I would not be one of those people.

So here’s the rub. If you know nothing about Eva but have always been curious, I’d recommend checking out ‘Death/Rebirth’ as a starting point. Ideally I’d love to start newbies with the original TV show (who’s controversial climax I personally adore), but even I have to admit that it simply hasn’t aged well. ‘Death/Rebirth’ condenses the first 24 episodes into one film. It’s a little harder to follow but covers everything you need to know.

However, if you’re already an eva geek like myself, and are okay with spoilers for everything from episode 1 to the end credits of evangelion 3.0 read on.

I’m not in the business of explaining the day away and even without going into any of the backstory here we have an awful lot to get through. In that spirit I’m going to post some helpful links that may aid your understanding of exactly what the hell I’m talking about, if you feel you need it. We’ve already established that you are (probably) an eva fan, and chances are you’re already familiar with sequel theory, but just in case you’re not, this article sums it up pretty well.

Because we’re just going to be assuming sequel theory to be correct (it very well may not be, but for the sake of this hypothesis we will be assuming it is), the events of the entire series and two initial films, D/R and EoE, are probably going to be important. As such, if you need a quick refresher on where EoE left Shinji and the gang, this handy video should bring you right back up to speed.

Holy shit that was a long introduction. But as any Eva fan will know, there really are no shortcuts when it comes to this franchise. Without further ado, let’s take a look at Evangelion 3.0: You Can (Not) Redo and a smaller look at the other two rebuild movies too.

Where Are We Now?

As seen in the article posted above, the world is a strangely different place when we arrive in Evangelion 1.0 and although there appear to be numerous nods to what has gone before, the events actually play out remarkably similar, almost identical, to the original show. It’s not until 2.0 that the divergent strands begin to emerge and more strange, subtle differences start to sew the seeds of doubt in the minds of viewers. By the end of 2.0 Asuka has been hospitalized having been crushed by Eva Unit 1 under Gendos orders (this is probably the strangest difference as it is Toji who is killed in the show and Asuka ultimately survives), Shinji has unwittingly unleashed Third Impact on the world in an attempt to rescue Rei causing them both to become trapped in the recently awakened Unit 1 and everyones favorite messiah, Kaowru has descended to earth in Unit 6 to pause third impact for the time being for reasons unknown. 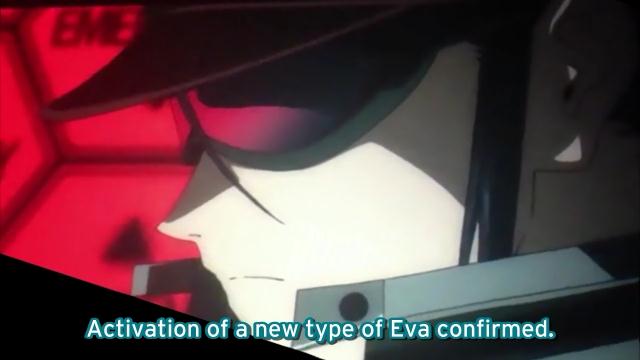 In a move so typical of Hideki Anno that we should all be ashamed of ourselves for not seeing it coming the whole time, 3.0 begins 14 years after the events of 2.0 and holy shit things have changed. The film opens with Asuka, still a little worse for wear, and newly unveiled mystery woman Mari Illustrious Makinami (more on her later), performing a rescue operation on Unit 1 (and fighting off an angel in the process because why the fuck not?) which results in Shinji’s recovery with no sign of Rei whatsoever. Shinji awakens and finds himself as confused as we are, convinced he successfully saved Rei and completely oblivious to whatever he’s done to earn everyones disdain and because this is a Hideki Anno film, they naturally offer no explanations.

Shinji, tiring of the passive aggressive behavior of his former NERV comrades is eventually and sort of voluntarily taken back to the geofront where he is re-united with Rei, Gendo, Fuyutsuki and introduced to the charismatic, young pilot Kaworu Nagisa. While most of the details are glossed over so comprehensively they could reflect sunlight, Kaowru does share with Shinji some important exposition. Shinjis attempt to save Rei resulted in Unit 1 becoming self aware (possibly due to adam coming into contact with lilith) beginning the Third Impact. Although Kaworu managed to stop it by impaling Unit 1, considerable damage had already been done; enough to destroy the geofront and cause Misato, Ritusko, Asuka and Mari to branch off from NERV to form Wille.

Yeah, we’re not in Kansas anymore.

As friendship develops between Kaworu and Shinji, Gendo and Fuyutsuki have their usual ominous conversations about SEELEs plan and Gendos plan and how they differ but are actually pretty much the same. Eventually Kaowru suggests retrieving the spears of longinus and cassius from the corpse of lilith (still held as far as I can tell, it what would have been known as terminal dogma, although no longer crucified. As for how the spears got there, don’t hold your breath, I’m personally stumped), which will give them the power to rebuild the world the way they want, instead of following the plans laid out for them by SEELE and Gendo. When faced with the spears however, Kaowru claims to have been mistaken about their identity (not the first time he’s gotten something like that wrong in this exact location) and completely bottles it. Asuka and Mari intervene, an epic fight ensues and Kaworu gracefully accepts death for the sake of Shinjis happiness.

Gendo expresses his satisfaction that SEELEs child has been dealt with and that now the path is clear for his own plan to unfold. Rei, beginning to understand the echoes of relationships created by her former self, begrudgingly accompanies Asuka and a beaten, broken Shinji back to Willes suped up, Eva powered ship, the Wunder.

‘Wow. That was some awful simplification and glossing over you did there, Andy’, I hear you cry, ‘but how does this all relate to sequel theory?’, well stop crying and I’ll tell you.